Distance is no Barrier to Upgrading Uzbekistan’s Power Sector adb.org – At the heart of the fabled Silk Road is one of the country’s least developed regions. A region rich in gas resources, but short of power generation capacity, where modern energy infrastructure is n…

6 Reasons why Jordan Will be ISIS’ Next Destination

alwaght.com – Alwaght- After the onset of Mosul liberation Operation that aims to recapture ISIS’s last stronghold in Iraq, and regarding the fact that this time terrorists cannot relocate into neighboring Syria…

My Team in PWL 2 would benefit a lot if Me & Satyavrat done the same team jersey.

enkaysagar.wordpress.com – My Team in PWL 2 would benefit a lot if Me&Satyavrat don the same team jersey. “He studies my competition and I analyze his”, says Sakshi Malik 31 October, 2016 New Delhi : Rio Olympics Bronze meda… 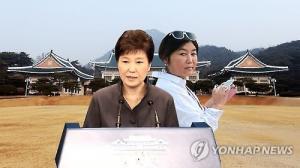 english.yonhapnews.co.kr – SEOUL, Oct. 31 (Yonhap) — President Park Geun-hye is expected to pick a new prime minister and complete a reshuffle of her secretariat as early as this week, her aides said Monday, in an effort to…

Widows in India: My children threw me out of the house – Al Jazeera English

Shared bySagar Media Inc
aljazeera.com – Vrindavan, India – Self-immolation, sati, on a husband’s pyre may have been banned in India, but life for many widows in India is still disheartening as they are shunned by their communities and ab…

Shared bySagar Media Inc
Voice Enabled 4G Sub $50 Smart Phone Mukesh Ambani JokeNovember01, 2016 (C) Ravinder Singh progressindia2015@gmail.com
When almost 70% to 80% jobs today like in IT-BPOs Services Sectorrequire Desktop Computer Use and Skills – India has just 12% homeswith a Desktop or Laptop – may be just 7% or 8% homes have Desktop forlearning.
In the past I had labeled him Extreme Dullard – here is more evidence.
http://trai.gov.in/WriteReadData/PIRReport/Documents/AGR_Master_File_for_the_QE_June_2016.pdfHere in this TRAI Report we can see that BSNL & MTNL together provideInternet & Broadband – ISP Revenue for FY17 Q1 was Rs.1778.73 Cr &Rs.204.64 Cr but next in line AIRTEL reported Rs.907.41 Cr – TwiceMore than Top Private Sector Telecom. RCOM didn’t disclose ISP revenue– TATACOM reported Rs.296.24 Cr and IDEA Rs.64.54 Cr. All ISP Revenuedoesn’t add up to Rs.5,000 Cr or about Rs.20,000 Cr or $3b for 1.3bpopulation.
So India’s Data Expenditure Per Capita is not even Rs.160 Annually[ISP Revenue] – Yet Our Corrupted BANKING SYSTEM is furiously fundingTelecom Sector and RJio alone reported CAPEX of Rs.2,50,000 Cr.
http://trai.gov.in/WriteReadData/PIRReport/Documents/Indicator_Report_05_August_2016.pdfThere is 6.26% growth in annual subscribers in FY16 – but AdjustedRevenue was just Rs.48,379 Cr Q14FY16 or revenue growth even lower4.97% – Yet India is mad about RJio. CAPEX PERHAPS EXCEED Rs.3,00,000Cr Annually for Little or No Growth for Corporate & SubscribersInvesting in Imported Mobiles.
http://www.trai.gov.in/WriteReadData/UserFiles/Documents/AnuualReports/TRAI_Annual_Report_English_16052016.pdfTRAI AR2014-15 Reported BSNL+MTNL annual Revenue Rs.28,645 Cr +Rs.3,821 Cr Which is More Than RCOM Rs.14,622 Cr and TATACOM Rs.13,905Cr. BSNL is offering Unlimited Land Line Broadband at Rs.245 PM, afraction of PVT ISPs – RJio. BSNL also Offers FREE TO AIR SatelliteBroadcast.
It is Scandalous That Demand for 4G RJio is in tier 3 tier 4 or SmallTowns where Subscribers are seeking RJio for its >> Free Voice Calloffering than Broadband.
When Mind is Corrupted & There is No Accountability – It is WorstImaginable Tragedy –Wasted Public Expenditure – NeglectingManufacturing, R&D, and Food Processing.
The Entire IDEA Of Mukesh Ambani is LUNATIC – Selling RJio toSubscribers who Can’t Afford Even a Rs.3,000 Product – Without GoodCamera & Big Enough Screen to Enjoy Videos & Youtube – Had CorruptedTRAI Chairman RS Sharma who Blindly Supports RJio.
Young Generation working in Call Centers – BPO who can afford SmartPhones work 9-10 Hours Everyday – have no time for Video & YoutubeDownloads. Unemployed Can’t Afford Smart Phones with Big Screens &Good Camera. Mukesh Ambani and his family Enjoys RJio Offerings.
Ravinder Singh, Inventor & Consultant, INNOVATIVE TECHNOLOGIES AND PROJECTSY-77, Hauz Khas, New Delhi-110016, India. Ph; 091- 9871056471,9718280435, 9650421857Ravinder Singh* is a WIPO awarded inventor specializing in Power,Transportation,Smart Cities, Water, Energy Saving, Agriculture, Manufacturing,Technologies and Projects

Haryana’s Chief Minister to be the Chief Guest at The Loomba Foundation’s Charity Concert for Widows in Association with FICCI in New Delhi
~Renowned Punjabi singer, Gurdas Maan will perform at the concert at Siri Fort Auditorium in New Delhi on November 5, 2016~
Hon’ble Chief Minister of Haryana, Shri Manohar Lal, will be the Chief Guest at a charity concert being organized by The Loomba Foundation, a global NGO accredited with the United Nations under DPI and ECOSOC, to raise funds for empowering 1000 widows and female inmates of all 19 district prisons in Haryana. The event is supported by the Federation of Indian Chambers of Commerce and Industry (FICCI) and will take place on November 5, 2016 at the Siri Fort Auditorium in New Delhi. Well-known Punjabi singer and songwriter, Gurdas Maan, will be the star performer at the concert accompanied by many other artists.
UK’s former First Lady and The Loomba Foundation’s President Mrs. Cherie Blair CBE QC together with Founder and Chairman Trustee Lord Raj Loomba CBE and his wife, Lady Veena Loomba will travel from London to attend the concert. Over 1500 people are expected to attend the music event, including senior politicians, diplomats, dignitaries, business leaders and 200 other distinguished guests.
Charity Concert Chairman, a Trustee of The Loomba Foundation, and Chairman of Bristol Hotel, Shri Balbir Singh Kakar, said, “We are grateful to our Chief Guest Shri Manohar Lal ji, singer Gurdas Maan ji, other performers and the dignitaries for helping create awareness on the cause of widows through this charity concert. I urge each one of you to generously donate to The Loomba Foundation which provides skills training to empower widows and education scholarships to their children.”
Founder & Chairman Trustee, Lord Loomba CBE said, “The Loomba Foundation has been empowering several thousands of widows across India and has provided educational scholarships to more than 10,000 children of poor widows. However, there are more than 46.5 million widows in India alone. We request the Central and state governments to play a larger role in eradicating the stigma related to widowhood and help us in improving the lives of the marginalized and impoverished widows. Prime Minister Narendra Modi has already set an example by launching The Loomba Foundation’s project of empowering 5,000 widows in Varanasi earlier this year.”
The Loomba Foundation works for the welfare of widows in India. It is assisting over 15,000 impoverished widows in nine states. Since almost two decades, it has also provided five-year-long education scholarships to more than 10,000 children of poor widows and supported more than 60,000 of their family members across 29 states in India. Currently, it is educating about 1600 children of poor widows in 13 states of India including Chhattisgarh, Delhi, Jammu & Kashmir, Karnataka, Maharashtra, Punjab, Tamil Nadu, Telangana and Uttarakhand.
The Loomba Foundation was inspired by Lord Loomba’s late mother, Shrimati Pushpa Wati Loomba who became a widow at an early age of 37 and succeeded in educating her seven children single-handedly in Punjab. The Foundation successfully campaigned for the declaration of International Widows’ Day by the United Nations, which takes place on 23rd June every year around the world.
at November 01, 2016