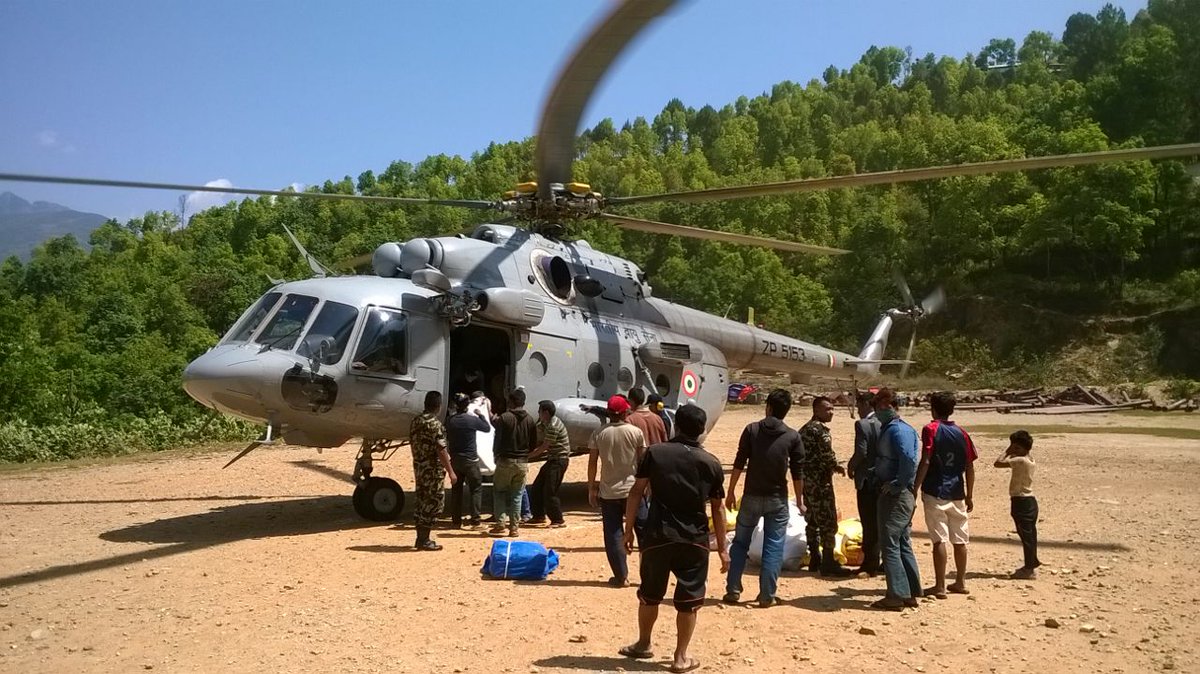 Baby boy Sonit Awal was rescued 22 hours after quake is commendable job. Indian army did stupendous task with its image touching class of international repute in distribution of foods for aid to far flung areas the Army Aviation’s ALH Dhruv helicopter pressed into action Gorkha,  IAF’s MI-17 V5 arrives at Langtang with relief material.
“The earthquake has caused unimaginable destruction,” said Rownak Khan, UNICEF Deputy Representative in Nepal. “Hospitals are overflowing, water is scarce, bodies are still buried under the rubble and people are still sleeping in the open. This is a perfect breeding ground for diseases.”
The April 25 earthquake flattened more than 130,000 homes and left 3 million people in need of food assistance. Some 24,000 people are currently staying in 13 camps in Kathmandu. In a country where just over 40 per cent of children are stunted, fears for children’s nutrition are rising.  At least 15,000 children with severe acute malnutrition require therapeutic feeding. There is also an urgent need for children in the 12 most affected districts to get back to their normal routine by setting up child-friendly spaces, opening schools and providing access to basic services, such as health and water.
As soon as the earthquake struck one week ago, UNICEF used its pre-positioned relief supplies to mount an emergency response and was able to provide aid, including tents to serve as emergency clinics at hospitals, tarpaulin for shelter, water trucking services in informal camps, water purification tablets and hygiene kits.
UNICEF is broadening its response so that children in the most severely affected communities, including those in hard-to-reach areas beyond Kathmandu, are provided with lifesaving services and supplies.
Total loss of life may ouch nearly 20K as the list of people untraceable and those critical injured  likely to come after 60 days of this natural calamity.EU Envoy says 1,000 Europeans still missing.  But as per official statistics, “The death toll has reached 6,624,” said the home ministry’s national disaster management division. A further 14,025 people were injured in the quake, it added.
A fresh 4.5-magnitude aftershock Saturday morning triggered panic among the people, who scrambled for open spaces.The 7.9-magnitude quake last week left a trail of devastation and suffering, with people spending the cold night in the open because of fears of fresh quake.
Nepal’s remote mountainous areas have suffered “almost total devastation” from the powerful quake, aid agencies have warned, even as relief slowly began to reach far-flung regions amid fresh aftershocks that kept people on edge.
International humanitarian bodies have called for greater urgency in relief efforts.
“One of our teams that returned from Chautara in Sindupalchowk district reported that 90 percent of the homes are destroyed. The hospital has collapsed, and people are digging through the rubble with their hands in the hope that they might find family members who are still alive,” said Jagan Chapagain, Director of Asia Pacific with the IFRC.
“We can expect the situation to be the same if not worse in many other places where aid has not yet been delivered,” Chapagain said.
There are estimates that up to 40,000 homes in Sindupalchowk alone have been destroyed, the International Federation of Red Cross said in a statement.
Also, over 1,000 EU citizens are still unaccounted for in Himalayan Nepal, diplomats said.
The Europeans had mostly been climbing in the avalanche-hit Mt Everest region and trekking in the remote Langtang range near the epicentre of the quake.
Foreign Secretary S Jaishankar and National Security Advisor Ajit Doval reached Kathmandu on Friday to oversee the relief and rescue operations launched under ‘Operation Maitri’ to aid Nepal.
The National Security Adviser Ajit Doval and the Foreign Secretary S Jaishankar called on Nepalese Prime Minister Sushil Koirala today in Kathmandu.
They took stock of the relief and rescue operations and assured the Nepalese leadership of assisting it with total dedication and commitment. Ajit Doval said India stands steadfastly with Nepal, and would give them all the help possible.They visited the earthquake affected areas and also conducted an aerial survey.
Ajit Doval praised the rescue operations and directed all the Indian agencies to carry the relief efforts in full swing in the quake ravaged nation.Ajit Doval has said that Indian agencies are working to restore communication lines in Kathmandu and far flung areas in Nepal.
Meanwhile, the death has crossed over 6000 in Nepal with rescuers still on war footing to evacuate trapped people.
Personnel of the Indian Army, NDRF and the Indian Air Force are reaching out to affected people in far flung areas.
No Land Acquisition, We demand Land Rights!!         —

MAY 2, 2015/LEAVE A COMMENT/EDIT
Take back Land Ordinance Now!!
INVITATION

Friends,
You all would be aware that the Modi-led central government passed the new land acquisition ordinance again on the 3rd April. With the ordinance, the central government has again proved that it is not bothered about the country or its people. It is willing to go to any length to sell the land, resources and lives of people to national or multinational companies. The government is not worried about the farmer suicides, un-seasonal rain and damage of lakhs of hectares of crops due to hailstorm. They are only worried about improving its image on the land bill controversy through ‘perception-cleaning campaigns’. Friends, the dialogues and agreement with stakeholder groups claimed by the government are as much a lie as the benefits claimed in the ordinance.
The protests against taking away of land, the loot of identities of farmers and workers and for implementing constitutional provisions have intensified across the country. The call for nationwide protests taken at the rally on 24th Feb by thousands of people has reached all villages, district, and states in the country.  At the convention held on 2nd April, more than 300 representatives of farmers unions, trade unions, urban poor, fish workers, women’s rights organisations, youth organisations and pro-poor intellectuals got together to form strategies for the intensification of the struggle  ahead under the banner of ‘Bhumi Adhikar Andolan’.
The time has come once again that we show our collective strengths to this anti-farmer-worker government.This is an appeal to all people working for a free and just society, with progressive and secular individuals and groups, to assemble in large numbers on 5th May at 10 am on Parliament Street, Delhi and participate in the massive rally.
Medha Patkar, Hannan Mollah, Atul Anjaan, Dr. Sunilam, Ashok Chowdhury, Prafulla Samantra, Rakesh Rafique, Dayamani Barla, Ulka Mahajan, Darshan Pal Singh, Manjit Singh, Roma, Harpal Singh Rana, Anil Chaudhary, Vinod Singh, Rajnish Gambhir, Akshay, Virenra Vidrohi, Kailash Meena, Mahavir Guliya, Amulya Nayak, Alok Shukla, Trilochan Punji, Rajim Ketwas, Umesh Tiwari, Ishwar Chandra Tripathi, M.S. Selvaraj, M. Ilango, Ramkrishna Raju, Hansraj Ghewra, Bhupendra Singh Rawat, Sagar Rabari, Jasbir Singh, Vijoo Krishnan, Madhuresh Kumar, Shweta Tripathi, Satyam Shrivastava, Ragiv Aseem, Sanjeev Kumar, Pratap Chaudhary and others
Contacts: 9958797409, 9810423296, 9818905316, 9911955109
Please find attached the English and Hindi Parch
Gadkari holds meetings with CMs of NE on projects of Rs 15,000 cr —

Gadkari holds meetings with CMs of NE on projects of Rs 15,000 cr

MAY 2, 2015/LEAVE A COMMENT/EDIT
May 2,
Union Road Transport and Highway Minister Nitin Gadkari is holding a review meeting with all Chief Ministers of North East including Sikkim in Guwahati. The meeting is expected to discuss on various roads and highway projects of the region. PWD Ministers and Chief Secretaries of the region have also taken part in the meeting.>Union Transport Minister Nitin Gadkari said the government will award road projects worth Rs 15,000 crore in the region by December.
“Of the total Rs 15,000 crore road projects envisaged for the North-East, Rs 6,000 crore worth highways will be developed in Arunachal Pradesh, Rs 2,000 crore projects each in Nagaland and Meghalaya and the remaining ones in other parts of the region,” Road Transport and Highways Minister Nitin Gadkari said in Shillong on Friday.
The Minister, who was in Shillong, to dedicate 4-laning of Shillong bypass and Jorabat-Barapani to the nation, said the central government will encourage the local contractors in the region to take up civil works for road projects with the aim of providing employment to the local population.
The Centre has also asked the north-eastern states — Assam, Meghalaya, Manipur, Nagaland, Mizoram, Tripura and Arunachal Pradesh — to acquire land and obtain the necessary regulatory clearances after which the Ministry of Road Transport and the National Highways Authority of India (NHAI) will build those roads.
“These measures will ease the bottlenecks in establishing the road projects,” he said.
He added that the National Highways & Infrastructure Development Corporation Ltd (NHIDCL) will provide 10 percent machinery and 10 percent resource mobilisation to the local contractors in advance to commence work on the highways.
Gadkari said that 18 new jetties will come up on the Brahmaputra river.
The 48.76 kms long road — connecting Umiam in Ri-Bhoi district and Mawryngkneng in East Khasi Hills District — was developed to decongest Shillong from trucks and heavy vehicles coming from or moving towards north-eastern part of Assam and other states like Mizoram and Tripura.
The project, developed at an estimated cost of Rs 226 crore, was completed in two years after work began in 2011.
The four-laning of Jorabat-Barapnai has been done to improve road connectivity between Guwahati and Shillong. The project length is 61.80 kms which includes the Umsning Bypass (5.82 kms).
The work has been substantially completed except in the Umsning Bypass stretch where pre-construction activities such as survey and site layout work is in progress.
Post the development of the road, travel time from Guwahati to Barapani will reduce to one-and-a-half hour as compared to the earlier duration of three hours.
The construction of the section has improved transport infrastructure in the North-East, particularly in Barak Valley region in Assam and in the states of Mizoram, Tripura, Manipur and Meghalaya.
At present, 12,000 vehicles ply on this road per day.
The Union Minister said that the Centre has given much importance in the development of water transport system in the country. Mr. Gadkari said that development of a country or state hugely depends on communication network. The Union minister during his 4-day trip to North East, went to Arunachal Pradesh and Meghalaya apart from Assam to take part in official programs.
Long live eight-hour day movement, Long live May Day —

Invitation for the International Buddha Poornima Devas on 4th May, 2015

Wesak Meditation “The Spiritual Event of the Year”

MAY 2, 2015/LEAVE A COMMENT/EDIT
Invitation – Wesak Meditation “The Spiritual Event of the Year”
From: “Vimal.Vaastu”
To: You
Show full Headers
1 attachment
Invitation_Wesak_Meditation.doc28.00 KBDownload
Dear Friend, Pls promote this event in best of your capacity.
The Wesak Meditation “The Spiritual Event of the Year”
The meditation is to Bless people everywhere and to convey the message of Wisdom, Light and Love.
Date- May 04, 2015
Time- 8.30 am
Location:  Hotel JW Marriott, Aerocity, Near IGI Airport, New Delhi – 110037
This meditation is open to all.
We urge you to kindly spread this awareness to all your friends and acquaintances to join us for this special Meditation.
Wesak -The full moon of Buddha: “…the greatest event upon our planet, from the stand point of the Spiritual verities, and the one which has the greatest effect upon the human race.”
(The Master Djwhal Khul.)* You are requested to carry your head-cover for the programme** You are requested to wear light coloured clothes.
Event Schedule:1.  Seating :  8:30 am2.  Lamp Lighting  :  8:50 am3.  Heart Sutra  :  8:55 am4.  Great Invocation  :  9:10 am5.  Wesak Meditation  :  9:12 am6.  Short Talk by PHFD T. Board  :  9:45 am7.  Hi-Tea 10:00 am onwards..——-
Look forward to seeing you all.
Vimal
8459 435 820
on behalf of PHFD- Pranic healing Foundation of Delhi.
http://www.delhipranichealing.net/
Petrol prices hiked by Rs 3.96 a litre, diesel Rs 2.37 —