“She is the guiding light in times of pitch darkness; she is the pillar of strength that keeps me moving forward; she was and will always be my hero; she is, therefore I am.”

As we continue this wonderful journey, we hope to realize and honor the unconditional love and support of our moms. Thank you, Mom!

Along with unveiling of the survey celebrities will also be sharing their stories at the event.

News around the world

A former intern for former Republican presidential candidates Mitt Romney and Paul Ryan was arrested Tuesday and charged with cyber-stalking and Internet extortion. Adam Savader, 21, is accused of illegally obtaining nude pictures of 15 women and threatening to publicize the images if the women, many of whom he knew from high school, didn’t send more. Victims reported receiving as many as eight text messages a day from May 2012 through February 2013. During his time as a Newt Gingrich staffer Savader was frequently assigned to dress as Ellis the Elephant, the hero of Calista Gingrich’s children’s books. The former intern has been photographed with influential Republican politicians and amassed 17,000 followers on Twitter, where he advertised himself as an “American patriot and Reagan Republican.” He faces five years in prison if convicted.

France has proposed draft legislation to monitor the wealth and business activities of politicians and civil servants. The law is intended to introduce transparency and to expose lawmakers' and politicians’ assets and providing the means to bar them from non-governmental posts if personal and civil interests clash. The draft bill follows the recent scandal that erupted over the secret bank accounts of former minister Jerome Cahuzac. The state council, the government's legal watchdog, would decide how much information to make public, once the personal assets of the individuals are disclosed. Failure to comply could lead to a three-year prison term and a 45,000 euro fine. A minister caught evading taxes faces a five-year jail sentence and a 75,000 euro fine.

Clashes between authorities and assailants have left 21 dead in Xinjiang, a province in northwestern China. The violence began with what authorities described as an act of terrorism, after local officials reported suspicious men wielding knives hiding in a home just outside the town of Kashgar. Fifteen local officials are reportedly among the dead, with six of the alleged terrorists also killed and a further eight captured. Although restive in recent months, Xinjiang has witnessed brief outbreaks of violence since 2009.

French Foreign Minister Laurent Fabius has warned that “the terrorists who wanted to attack France and Libya and undermine the friendship between them will pay" for Tuesday's devastating car bomb attack on the French Embassy in Tripoli. Fabius spoke shortly after visiting the wrecked embassy in the hours after the bombing, AFP reported. Tripoli's security chief Mahmud al-Sherif said the blast occurred when a car parked outside the mission's front door exploded, adding that it had not been a suicide bombing. One guard was seriously wounded and another lightly injured in the attack on the mission, and a girl living in the neighborhood was also reportedly hurt.

Citing the violence which followed Venezuela’s presidential elections, which left nine dead and several hundred injured, the country’s National Assembly has announced a committee to further investigate any responsibility on the part of the country’s Justice First opposition party. Henrique Capriles, who lost the April 14 presidential elections by a thin margin to Nicolas Maduro, has been the target of heated rhetoric from the incumbent socialist party. Heading the investigative committee, which will include no opposition members, will be Pedro Carreno, a legislator who on Wednesday branded Capriles a “murderer.”

Seoul has warned that it could take “serious” action if North Korea does not engage in dialogue with a view to restarting the Kaesong joint industrial zone by Friday, Yonhap reports. “We make an official offer to North Korea to hold a working-level meeting to discuss ways of normalizing the suspended Kaesong Industrial Complex and providing humanitarian aid to South Korean workers there,” the Ministry of Unification said in a statement on Thursday. Amid ratcheted military tensions earlier this month, North Korea announced the withdrawal of its 53,000 workers and a halt in operations at Kaesong. The Kaesong industrial zone, which opened in 2004 and produces a range of consumer goods, had previously seen its operations unaffected be past crises.

Three Tibetans died after setting themselves on fire to protest Chinese rule in one of the country’s western regions, exiled Buddhist monks and reports said Thursday. Two of the three protesters were monks at a monastery in Ruoergai county of Aba prefecture, according to exiled monks and the Free Tibet group. The two monks, aged 20 and 23, set themselves on fire in a corner of an assembly hall of the Taktsang Lhamo Kirti monastery. A Tibetan woman, aged 23, in Rangtang county in the same prefecture also reportedly died after self-immolating Wednesday. More than 100 Tibetans have self-immolated since 2011 in protest against Chinese policies.

Italian Prime Minister-designate Enrico Letta, the deputy head of the center-left Democratic Party, began negotiations on Thursday to form a new government and end a nearly two-month-long stalemate. The government will include Silvio Berlusconi’s People of Freedom party, as well as caretaker Prime Minister Mario Monti’s centrist bloc. Berlusconi said “the important thing is that there is a government and that there is a parliament that can approve measures that we absolutely need to emerge from the crisis of recession.”

The number of jobless people in France reached 3.2 million in March, the country’s labor ministry reports. The figure is 11.5 per cent higher than in the same month last year and 1.2 per cent higher than in February. The number of unemployed is the highest since the records began in 1996. The French labor ministry doesn’t express the jobseeker figure as a percentage of the work force as it’s done by the International Labor Organization

Culmination Event of Education for All Global Action Week, 2013 “Every Child Needs a Teacher” 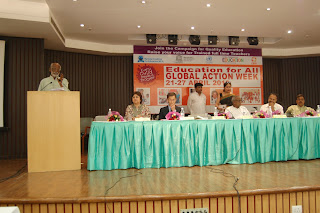 Education for All - Global Action Week happens every year – it’s a moment when children, teachers, parents and the like-minded people around the world unite in their demands for education.
UNESCO New Delhi, UNIC, CARE India and National Coalition for Education (NCE), the national country representative of Global Campaign for Education’s (GCE) organized several national level campaign activities during the Education for All - Global Action Week, 2013.
This year the Education for All Global action week is being held from 21st to 27th of April, 2013 and has set the theme “Every Child needs a Teacher”. The campaign every year seeks the opportunity to highlight one area of the Education for All goal and make targeted efforts to achieve change on the ground, with the added support of education campaigners and millions of members of the public worldwide joining together for the same cause.
The culmination event on "Education for All, Global Action Week 2013" was co-organized by UNESCO New Delhi and national Coalition for Education (NCE) in New Delhi on 25 April 2013.
The participants and speakers in the culmination event will be representatives from schools, student community, parent teacher association representatives, teacher unions, parliamentarians, academicians, international NGOs and INGOs, and print and visual media representatives. Some of the main media houses who covered the event were All India radio, BBC world, News Express, Governance Now, Aapka Faisala, Hinduastan.
The chief speakers at this occasion were following
1.      A.V.Swamy- Member of parliament Keynote Speaker
2.      Rampal Singh- General Secretary, NCE (welcome Address)
3.      Shigeru Aoyagi- Director UNESCO
4.      Kiran Mehra- Director of UNIC
5.      R.C.Dabas- Akhil Delhi prarthamik delhi sangh, president
In his welcome address Mr. Rampal Singh, General Secretary of NCE, said that The GAW platform provides us an opportunity to negotiate our demands for education to policy makers. In a country where 12 lakh teachers are lacking, it is difficult to imagine a strong and educated nation.almost 7 lakh para teachers are appointed for educating children. If we wish to have an educated nation then appointment of full time & trained teachers is vital. The central & state governments are responsible for education of the people but it is a sorry state of affair that both the governments indulge in blame game , we cannot fulfil the goal of education through private & corporate educational institutes. National Coalition for Education along with its partner organisation will strive to make ‘Every Child needs a Teacher’ campaign successful.
Mr. Shigeru Aoyagi, Director UNESCO New Delhi, said that  We will deliberate on the importance of the teachers, why teachers are importance & what are the challenges we are facing? Without qualified teachers for everybody education for all cannot be achieved. The right to education act was launched in 2009 and the first deadline of RTE was last month. Challenges- we face school dropouts, 8.1 million children do not have access to knowledge & information. UNESCO is worried about absenteesm among teachers is a grave problem amounting to 25%. The quality of the teachers is also a huge problem.
A.V.Swamy, Member of Parliament, Rajya Sabha in his keynote speech said that  Every human being is a storehouse of knowledge and the knowledge comes out through an environment of enquiry, this spirit of enquiry has to be encouraged by teachers. I am fortunate to be a member of the delegation of Millennium Development Goals, I was associated with NCERT, I was once a teacher teaching up to 5th grade. It is necessary to ignite the spirit of enquiry within the student without ever telling the child that she does not have the potential to understand. The government has failed in providing education for all. I assure you that as a parliamentarian I will do all that is in my power to fulfil the demands presented by you.
Ms Kiran Mehra Kripplman, Director UNIC said that Education is a basic fundamental right and not the privilege of a few. Education is the single best investment that nations can make for developed, healthy and equitable societies. Not just education but quality education is the right of every child. Gender, geography, poverty and accessibility should not prevent any child from getting education. This year’s theme of ‘every child needs a teacher’ calls for a review of quality and quantity of education, review of the GAW movement. It is important to mobilize political commitment and funding for education. UNESCO goals for education:
1)     Every child in school
2)     Improve quality of education
3)     Foster global citizenship

At last Mr. Rampal Singh thanked all the participants of Culmination event of EFA Global Action Week 2013.
at April 26, 2013 No comments: Links to this post