New Delhi May 22, 2012. Sant Nagar under GK-I area in south Delhi is
reeling under acute water shortage since last many months. Some times, when
it comes, it mixed with sewage also. DJB authorities are not going to
listen even the voice of a 75 year old senior citizen Mrs Kaushal Sharma
who keeps watching the taps over night (only in search of water). Despite
many complaints to the different office bearers of DJB, we are unable to
get drinking water in our taps, said Vinod Bansal spokesperson of the Sant
Nagar Peyjal Sangharsh samiti.

*Whenever we dial DJB complaint number, it usually got engaged/no reply.
If, any how, we got it & ask for the action, they have a mechanical reply
“we are here to forward your complaint to JE and it is he to decide what to
do or not to do. You may speak to him directly”.  When we talk to JE &
above it is a standard reply that “Non else, except you, who complaint from
your area, therefore, you check your connection, we could not do any thing
in this regard” replied to Mr Sandeep Chadha and Vijay Gupta of the samitee.
Vaidic scholar and prominent spritual lady Mrs Vimlesh Arya cought by
hypertention and is on bed rest since last one week due to overnight
stay in search of water.*

*Myself personally lodged complaint No. 7, 8, 17, 01 & 04 on 16th , 18th, 19
th, 20th & 21st of this month respectively but No action has yet been taken
against any one of them, said Vinod Bansal, the spokesperson of the Sant
Nagar Peyjal Sangharsh samiti.  Despite the scheduled timing of 4 to 7 Am
for water supply in our area, we the residents of Sant Nagar, East Of
Kailash (particularly from House Number 327 to 330) have to stay over night
as it is not sure when it may reach and how long we could get but it is
sure that it is contaminated. As no body is going to listen our voice. In
such a situation how our chief minister could claim to have implemented
Citizen Charter in the national capital? It is a big question.*


. *Where is CMs Citizen charter, asks residents and a copy of some letters send to the DJB authoritise are attached here with
*Regards*
at May 22, 2012 No comments: 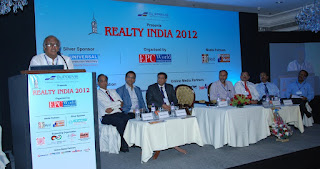 New Delhi, May 20th 2012: To upscale its real estate, India needs to add more cities, while strengthening existing ones, with an effective urban planning strategy which is sympathetic to regional needs and considerations, said Prof. Saugata Roy, Minister of State – Urban Development, Government of India at India Realty 2012 organised by EPC World Media Group.
"The massive urbanisation in the past few decades has led to severe housing shortage for the urban poor... providing affordable housing is one of the most formidable challenges that our country faces today," Roy added.
Raising his concern over the lack of participation from real estate developers on houses for urban poor, Roy said, “The government has sought to create an enabling and supportive environment for expanding credit flow to the housing sector and increasing home ownership in the country.”
Several policies and initiatives like fiscal incentives have been taken to facilitate private sector participation in supply of affordable housing, he added.
While delivering his welcome address, Tejasvi Sharma – Editor-in-Chief & Director, The EPC World Media Group said, “At present, the country have shortages of around 26.7 million units, which is a matter of concern. As the economy shows signs of decreasing GDP growth rate, the Indian real estate industry faces its own share of concerns – rising raw material prices, fluctuating interest rates, inflation, weak governance etc.”
The Realty India 2012 is at right place and at right time, he added. Realty India 2012 held in Delhi and aptly themed ‘Emerging business opportunities & changing trends in the Indian realty market’ aimed at gaining perspectives on factors that could turn India into a global real estate powerhouse in the next few years.
Addressing the inaugural session, Dr Sudhir Krishna, Secretary, Ministry of Urban Development, Government of India, said, “It is necessary to provide better living conditions for people in urban areas whether they are rich class, middle class or poor. And this can be done through only real estate industry as they are facilitator for us.”
"We are looking forward to reciprocate the initiative from the private sector to supply these housing units," he added.
Giving an overview of 12th Five Year Plan, Dr PR Swarup, Director General, Construction Industry Development Council (CIDC), said, “India requires around Rs55 lakh crore of investment in the next five years to uplift the urban infrastructure, but, at the same time there is a great need for skilled and trained labour. I urge government to take some constructive steps in developing modules and institutions for untrained manpower of India.”
Echoing the same was Ranjeet More, Vice President–BAI (West) & MD, Universal Construction Machinery & Equipment. While delivering his keynote address, More said, “India needs to mechanize the entire process of construction to match the speed and quality of developed countries but for that we should be able to produce skilled labour to deliver the massive infrastructure of the country.”
According to HS Pasricha, Chairman – Delhi Centre, Builders’ Association of India & MD, Winner Constructions Pvt. Ltd, affordable housing is a real problem in India, and the world is well aware of it. “The income pyramid in India is heavy at the bottom, with over 60% of the households earning averagely less than Rs80,000 per year. Nearly 19% of the households can’t afford any type of housing through their income. Another 44.6% of the households in the Lower Middle Income Group can’t afford a house in Tier I or II cities. Builders, architects and government have to plan real estate development which conforms to the needs of the income pyramid of India.”
Housing is a basic need and measures like increasing density by hiking the floor-area ratio and encouraging public-private partnership should be considered in fulfilling the housing need of the country, opines SK Chaudhary, Sr. Executive Director-Projects, HUDCO.
He said availability of land at cheap rates is the greatest challenge in providing affordable housing in the country.
However, Prof Roy, in the second phase of Jawaharlal Nehru National Urban Renewal Mission (JNNURM) targets to build around 15 lakhs homes for urban poor. “JNNURM is a reform driven programme and in the next phase of JNNURM, we will build around 15 lakhs of homes for urban poor.”
He also added that under JNNURM, it has sanctioned around 40 solid waste management projects under public private partnership model.
at May 22, 2012 No comments: