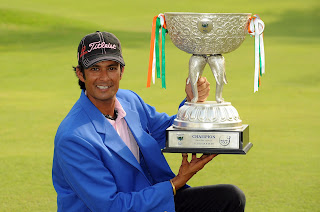 New Delhi, April 1, 2012: Digvijay Singh of India closed with a flawless six-under-par 66 to end an agonising 12-year wait for his maiden Asian Tour title at the Panasonic Open India on Sunday.
Singh produced a grandstand finish with a 12-foot birdie putt on the last to defeat Asian Tour winners Siddikur of Bangladesh and Gaganjeet Bhullar of India by two shots at the US$300,000 event sanctioned by the Asian Tour and PGTI.
Thai veteran Boonchu Ruangkit rolled back the years with a 67 to finish in fourth place while overnight leader Ashok Kumar was in contention before dropping four shots in the last six holes at the Delhi Golf Club. He ended his campaign in tied eighth place.
“This is very special for me. There’s no feeling better than winning an Asian Tour title in India at the Delhi Golf Club. I’ve won on the local circuit before but this takes the cake,” said Digvijay, who totalled 11-under-par 277 to win US$47,500 and two return business Turkish Airlines tickets to any destination in Europe.
Singh, who was three shots back at the start of the day, came charging home with a superb back nine highlighted by birdies on holes 13, 14, 16 and 18 to the delight of the home crowd.
“The 13th hole was the turning point that got me going. I made my second birdie of the day on hole seven and couldn’t convert anything until the birdie on 13. From then on, the birdies starting flowing in,” he smiled.
“I wasn’t disheartened when I lost my Asian Tour card last year. I told myself, this is where I’m and I should make the most of it. It was frustrating that everybody has won it except me but I’m glad I’ve done it,” added the 40-year-old, who was hugged by his brother-in-law Jyoti Randhawa after sinking his winning putt.
Bhullar, a two-time Asian Tour winner, was in contention for most of the round but had to settle for second as he tipped his hat to Singh, who he said was the deserving winner.
“Digvijay played incredibly. He deserved this long awaited victory. It is all part of the game but I felt I could have done a little better. I’ll accept this finish and go with the flow because I’m playing well again after a long time,” said Bhullar, who mixed his card with three birdies against one bogey for a 70.
Siddikur, the first Bangladeshi to play and win on the Asian Tour, rued another missed opportunity of winning his second title as he claimed his 12th top-10 finish on the Asian Tour.
Sanjay Kumar and Shankar Das had the next best result among the Indians as they ended tied fifth at six under 282. Sanjay Kumar’s 65 was the best score of round four. Anirban Lahiri, who also fired a 65 on Sunday, was placed tied eighth along with Ashok Kumar at five under 283.
at April 01, 2012 No comments: 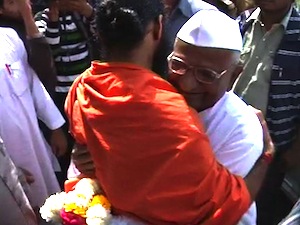 Greetings from Maitri.
It gives me immense pleasure to invite you to a workshop on Violence against women: Policy perspectives on domestic violence in India. The workshop is scheduled to be held on April 5, 2012 at Indian International Centre in New Delhi. Please find the Background Note attached.
We look forward to your participation to make the workshop meaningful and productive.

Please do not hesitate to get in touch with us in case of any questions or clarifications.
Kindly acknowledge.

Launching its probe into Army Chief Gen V K Singh's allegation of having been offered bribe by an equipment lobbyist, CBI on Friday registered a case for alleged irregularities in supply of all-terrain Tatra trucks through state-owned BEML to the Army.

After registering a case against unnamed officials of the Defence Ministry, Army, BEML and Vectra for alleged criminal conspiracy to cheat and indulge in corrupt practices, CBI officials carried out searches at four places in Delhi, Noida and Bangalore.

The FIR also names Vectra group Chairman Ravi Rishi, who is a majority stake holder in Tatra, and the agency is looking into purchases from 1997 onwards.
CBI sources said British national Rishi, who is in the national capital for the Defence Expo, was called for questioning in connection with the alleged irregularities in the deal.
As CBI teams began with the searches, the Defence Minsitry came out with a statement saying the Defence Minister accorded his sanction for a CBI investigation on February 21, 2012, much before the case hit the headlines in the media.
A day after receiving a letter from Ghulam Nabi Azad, on October five, 2009, forwarding the complaints of D Hanumanthappa, addressed to Congress President Sonia Gandhi on BEML, Defence Minister A K Antony had asked the Secretary (Defence Production) to look into the various issues raised in the complaint.
"Records show that the vigilance wings of MoD and BEML are examining the matter and there are also correspondence between CBI and Chief Vigilance Officer of BEML on these allegations," the Defence Ministry statement said.
The deal came to limelight again as the Army chief alleged he was offered a Rs 14 crore bribe to clear a file related to purchase of trucks.
Reacting to alleged involvement of agents and lobbyists in placement of orders for the Tatra trucks, state-owned BEML chief V R S Natarajan has said "in the last 26 years, from 1986 onwards, BEML assembled manufactured, supplied 7,000 Tatra trucks. All of them have been done on single nomination basis, single inquiry basis.
"This type of equipment nobody in the world makes, because of its superior technological features. When I am the single vendor and there is no competition, there is no influence required," he said.
The names of Tatra and Bharat Earth Movers Limited were taken by the Army in a press release issued by it on March 5, alleging that retired Lt Gen Tejinder Singh had offered a bribe on behalf of Tatra and Vectra Limited.
at April 01, 2012 No comments:

Explosion in the town of Marl Germany

One person was killed on Saturday in a chemical plant explosion in the western part of Germany. Earlier it had been reported that several people were injured.The incident occurred in the town of Marl in the western part of Germany.Police believe that a tank of flammable substances exploded.
The facility is engulfed in flames and more than 100 firefighters are struggling to contain the fire.
Rescue helicopters and ambulances are at the scene.It is unknown whether there was a release of hazardous substances into the environment but as a precaution local residents were advised to close all windows and doors.
Marl police confirmed a pressure vessel in the park blasted at 13:36 local time.
Three staff members were missing, police spokesman Michael Franz told media. He said one was injured, another spokesman said two had been confirmed injured.The firefighters were "fully engaged" and the flame was "locally limited," the police said.Accident in the park in the Ruhr industrial region sent up a giant gas cloud,  moved southward,spreading over a major east-west highway, the police said.
Franz said emergency crew had tested the cloud at the site and found no harmful content. Police have warned local residents to close windows and doors and stay inside buildings.There is no death report yet and the cause of the explosion is under investigation.
at April 01, 2012 No comments: