Dato’ Bernard Francis brings with him nearly 14 years of experience in aviation industry with revenue management and sales & marketing expertise. Prior to AirAsia X Berhad, Dato’ Bernard was the Commercial Director for Indonesia AirAsia. Under his leadership,  Indonesia AirAsia posted a revenue of IDR4,360.13 billion (up 18% y-o-y), a 136% increase in operating profit of IDR352.89 billion, which led to a commendable 129% increase in profit after tax of IDR142.12 billion for the year ended 2012.

Dato’ Bernard holds an MBA of International Business from Universiti Malaya and B.A Hons from National University of Malaysia.
About these ads
Occasionally, some of your visitors may se
Edit : EditComments : Leave a Comment » Categories : Uncategorized

Modi the Phenomenal the voice of the nation.

6052014
Mode spoke with complete emotion running high and showed the Indian leadership that there is an absolute grace in common man becoming the national leaders his utterances has proved that Indian leadership has not decayed but is in galvanizing mood.His taking up the elite leadership with his emotional outburst and giving reflexive update to the jibes and political rebuttal Modi at his state of artistic eloquence with pinch of graceful worded robe has made Modi the Phenomenal  the voice of the nation of  billion.Political parties leaders across India finds the emergence of Great thinker, Great action to follow and therefore is likely to be attacked politically by his counterparts from all direction as is the psychic of the nation to pull the strings down of the right person.
#Modi #BJP pic.twitter.com/mSrNAkKZ1f 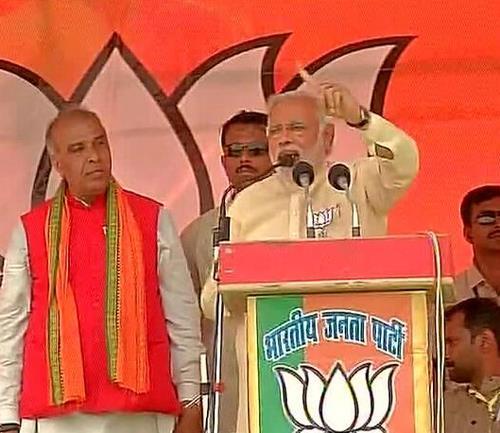 6052014
Dear Mr Sagar,
Hope you are doing good
We have just released the first issue of  Woodpecker monthly Newsletter. Please find attached a copy.
I look forward to receive your comments.
With Best Regards
narender yadav

Analysis of Criminal Background, Financial, Education, Gender and other details of Candidates

National Election Watch (NEW) and Association for Democratic Reforms (ADR) have analysed the self-sworn affidavits of 601 candidates out of 606candidates who are contesting in the Phase 9 of Lok Sabha 2014 Elections. The rest of the candidates were not analysed due to unclear/incomplete affidavits uploaded on the ECI website at the time of making of this report. Detailed report in English attached with this report.

A citizens protest at Assam Bhawan, Chanakyapuri, New Delhi on May 7th at 3 pm

New Delhi, May 5 : The spectre of ethnic conflict has raised its ugly head again in Kokrajhar and Baksa districts. The indiscriminate firing on May 1-2 by armed Bodo militants, allegedly by National Democratic Front of Bodoland (S), has left 31 dead (all Muslims except one), including 11 children, more than 20 injured and 31 missing. In addition, thousands have been forced to seek refuge away from their villages in camps in Baksa district. NDFB (S) has been blamed for the attacks, however, it is also alleged that the recent attack has happened in the wake of Muslims supposedly having not voted for the Bodo People’;s Front (BPF) candidate, Chandan Brahma. BPF is in alliance with Congress and part of ruling combine in Assam. The results of the General Elections are not out yet but the allegation that Bengali Speaking Muslims have mostly voted for Naba Saraniya, a former ULFA commander, backed by the Sanmilita Janagostiya Aikkyamancha (SJA), an amalgamation of at least 20 ethnic and linguistic groups in the region has led to this attack.

NAPM strongly condemns this inhuman attack on women, men and children and the failure of the Assam government in protecting the lives of the minorities. The incidents like this keep repeating with impunity but even then the failure of administration in maintaining peace and security is palpable.  In 2012 too, more than 100 people, mostly, Muslims were killed and nearly 4 lakh were displaced and were forced to live in relief camps for long.

The region has been witness to conflict for nearly three decades now in the name of creation of an exclusive homeland for Bodos. The violent ethnic conflicts in 90s led to creation of Bodoland Territorial. Council (BTC ) in 2003 with jurisdiction over Bodoland Territorial Area District (BTAD) constituting 70% of non-Bodo population composed of Koch-Rajbansis, Asamiya Hindus, Asamiya Muslims, Rabhas, Na-Asamiyas Muslims, Bengali, adivasis and Nepalis. The BTAD consists of four contiguous districts Kokrajhar, Baksa, Udalguri and Chirang. The conflict earlier tragetted Santhalis, Bengali Hindus and Muslims but over the years various ethnic groups have raised their own armed groups too. Bengali speaking Muslims, however continue to face the ire and discrimination since they are all alleged to be Bangladeshis and have become a common target across Assam. The bogey of Bangladeshis taking over jobs and outnumbering not only Bodos but Hindus and other ethnic groups in Assam has been played by political parties and ethnic groups at various points, most recently by Mr. Narendra Modi in his rallies there.

NAPM believes that the aspirations for autonomy of ethnic groups need to be respected and political solutions for such demands be found but then it can’;t be done at the cost of the rights of other ethnic groups as is being done here. It is time the BTAD was reimagined with an eye towards resolving the conflict once and for all. This has become necessary since, the current round attacks, mainly seen as poll revenge, is nothing but to continue the political and economic hegemony of tiny elite class within Bodos and pitch poor Bodos against the non-Bodos. It is this nexus of Bodo political elite with the ruling dispensation in Assam which needs to be broken, since the genuine aspirations of people in the region has been hijacked.

We demand immediate action against the culprits, relief to families of dead, injured and displaced. NAPM demands that a Commission of Enquiry must be instituted and role of BPF MLAs be examined in inciting the violence. We also urge that political parties and groups maintain clam and not incite further tension by raising the  bogey of Bangaldeshi immigrants in an already polarised electoral atmosphere.

We also call upon all progressive forces to join the citizens protest at Assam Bhawan, Chanakyapuri, New Delhi on May 7th at 3 pm and demand justice for those killed.

6052014
Nehru Memorial Museum and Library
cordially invites you to a Public Lecture
(in the ‘Science, Society and Nature’ series)

Abstract:
Access to abundant, clean and affordable energy sources is a paramount concern for developing countries striving to raise the quality of life for their citizens. For India, with its billion plus population and low per capita income, balancing climate change concerns with an energy intensive growth paradigm constitutes a formidable energy security challenge. India’s chosen growth paradigm is hugely import-intensive in as much as it relies heavily on hydrocarbons in which the country is deficient. Exploding private transport and the growing share of road-based freight movement continue to aggravate reliance on imported crude. Promise of abundant natural gas supplies from recent domestic offshore discoveries has floundered on geological and pricing problems, leaving gas infrastructure stranded and rendering gas-based industries unviable.  Electricity generation continues to be the most polluting industrial activity, reliant as it is, on India’s dirty coal.  Yet, more than half of India’s rural households do not have electric connectivity and even those that do, get supply only for a few hours a day. Coal still supplies more than half of total commercial energy, and more than eighty percent of India’s electricity generation. Natural gas, the relatively cleaner fossil fuel accounts for a little over 10 per cent of India’s power generation capacity but generates insignificant quantities of power owing to shortage of domestic gas. Transnational gas pipelines which could have increased the share of gas in India’s energy basket, remain elusive, hostage as much to politics as economics. Big dams have become controversial thanks to mishandled resettlement and rehabilitation efforts. Renewable energy sources such as wind and solar still need considerable subsidy support to render them affordable. With an aspirational population clamouring for a better life style and rapidly gaining the wherewithal to pay for it, Indian policy makers do face a formidable challenge in planning a transition to a clean growth paradigm. A fundamental rethink on the way in which we view development coupled with quantum leaps in accessible technologies that will make the transition possible, are the need of the moment. Against this backdrop, how do we redefine energy security? How do we rethink our growth paradigm, aligning it with our resource endowments and constraints, yet meet the aspirations of our energy-starved people? Do we, as a nation, have the vision and the fortitude to make course corrections in our growth trajectory?

Speaker:
Ms. Sudha Mahalingam is an energy economist with over thirty years of professional experience. Currently she is visiting fellow at Elliot School of International Affairs, George Washington University. She is also a member of Scientific Advisory Board at Delft University, The Netherlands. She has been a guest faculty at Lal Bahadur Shastri National Academy of Administration, Mussoorie that trains India’s senior civil servants, at NIAS, Bengaluru, Indian Police Academy, Hyderabad, National Defence Academy, New Delhi etc. In 2012, she completed five years as Member of India’s Petroleum and Natural Gas Regulatory Board.  In her capacity as an energy expert, she was also Member of India’s National Security Advisory Board. Prior to her current assignment, she held the prestigious Senior Fellowship at the Centre for Contemporary Studies, Nehru Memorial Museum and Library, New Delhi, India.  In 2007, she was awarded the first K. Subrahmanyam award for excellence in strategic studies by IDSA, India’s leading strategic studies think-tank.
at May 06, 2014 No comments: