Unicef’s Water Supply, Sanitation and Hygiene programme (WASH) has improved the quality of drinking water, sanitation and hygiene for hundreds of thousands of people in Afghanistan. Between 2017 and 2018, Finland contributed EUR 2 million to the programme.
In 2018, Unicef’s WASH programme in Afghanistan had a budget of USD 20 million. The majority of the funding from Finland, USD 1.6 million, was allocated to improving sanitation. 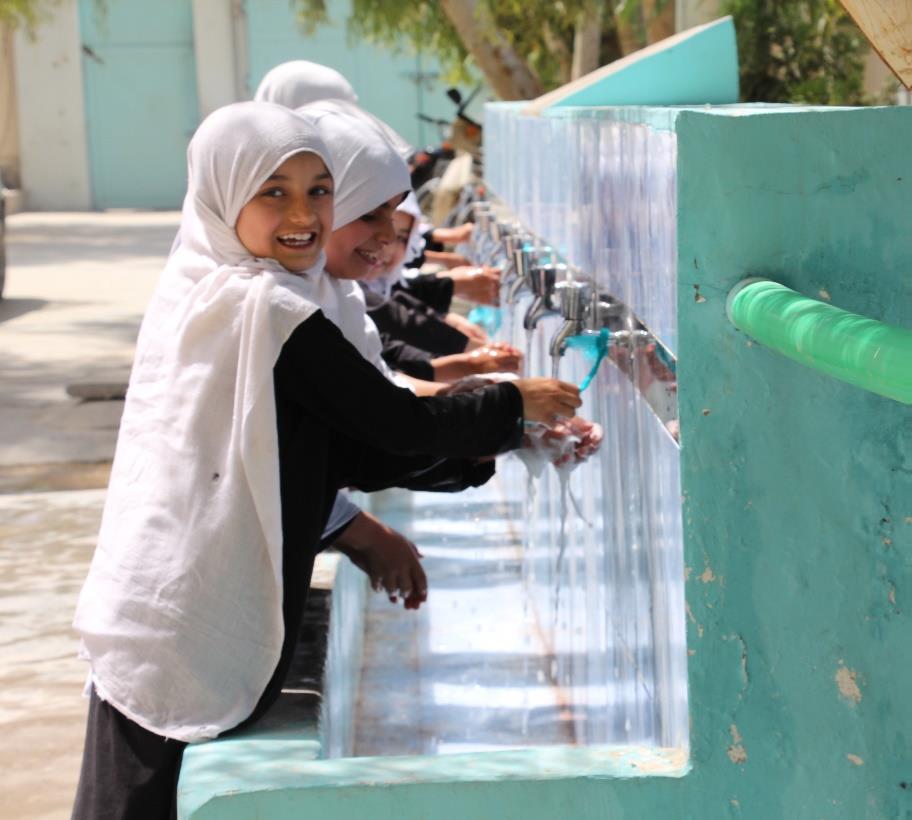 Diseases caused by contaminated water are the second most common cause of death for children under the age of five in Afghanistan. The lack of safe drinking water and sanitation combined with poor hygiene also help spread polio.

Dozens of polio viruses have been found in the slums around Kandahar, and Helmand province is also an area where polio is considered high risk.

In rural areas, one in five people do not have sanitation. For this reason, organic waste accumulates in their living environment and contaminates soil and water.

Nearly 200,000 people benefited from improved water supply in rural areas. The preferred technological solutions included solar-powered and gravity-fed pumps, taking advantage of the elevation differences in mountainous regions. The share of these new technologies increased to 81 per cent of all technological solutions used, significantly reducing the number of hand pumps.

Slightly over 20 per cent of the funding allocated to development aid was spent on sanitation improvements, with 526,000 beneficiaries. The programme’s aim is to meet the needs of the entire population by 2025.

Approximately 15,000 students gained access to the water and sanitation improvements carried out in schools last year. However, less than a third of them were girls. The new recommendations for helping girls stay at school during periods were therefore a significant achievement. The message “My menstruation should not be a barrier for my education” reached 315,000 girls and 840 female teachers in 22 provinces.

Some of the programme funds were allocated to water and sanitation rehabilitation and capacity building in health centres. Approximately 51,500 students and 1,100 teachers benefited from these hygiene improvements. Depending on the programme area, the project partners included three ministries: Ministry of Rural Rehabilitation and Development, Ministry of Education and Ministry of Public Health. Civil society organisations played a major role in implementing the improvements.

Implementation of Unicef’s WASH programme was possible in nearly all of the provinces, including those under Taliban’s influence.

In Afghanistan, the El Niño weather phenomenon brings exceptionally heavy snowfall, which in turn causes severe flooding in spring. For this reason, the share of humanitarian aid in the WASH programme may remain high in the coming years, which may undermine the results in the other programme areas.

The writer works at the Department for the Americas and Asia as the official responsible for development cooperation in Afghanistan. The figures are based on the Annual Report presented to the organisations funding Unicef’s WASH programme.
at May 16, 2019 No comments: Links to this post

Er. Anjli Chandra, PSERC, Chandigarh led Government side, BRPLled private power sector and I mainly represented All Consumer side at an event on Smart Metering.

Since 2003 – BRPL, BYPL & NDPL in Delhi had installed ‘Software Operated Smart Consumer Meters – almost 100% - Over 5 Million Today in Delhi’ but in Supreme Court and dealing with Regulators & Government claim them to be ‘Electronics Meters.’ All their Consumer Friendly features were DISABLED. For BRPL+ these were 100% SMART it can Download all the OPERATING DATA – for Consumers as Good as E-M Meter.

Since 1974 or last 45 years this WIPO awarded inventor wanted Indian companies to be World Leaders and has Offered Technologies to Birla, Tata and Ambani and all others but Industry preferred Financial Manipulation as means to earn profits than Customer Services, and Efficient Technologies.

RIL was told in 2011 ‘You Have So Much Money – Can Promote 100,000 Technologies and be World’s First $1000b Company’. RILengaged Mashelkar who filed BOGUS Patent and Fake Research – soon over 50,000 IDEAS or So Applied to PARTNER with RIL – after 2-3 years it all COLLAPSED.

1.     SMART METERING was introduced immediately after MANAGEMENT TAKEOVER by two old Mumbai Power Distribution companies – BSES and Tata Power in July2002 itself, when Electro-Mechanical Meters recording Low Consumption were‘TESTED By ACCUCHEK METER [5 Decimal Accuracy] ON SITE’ – in 5 minutes. Slow by even 1% were replaced immediately – 17% Fast were last to be replaced.

3.     When I led CAMPAIGN against FAST METERS for six months across Delhi – found None of the Consumer Friendly Feature was OPERATING – Decimal Points for Energy, Live Load in Watts, Max & Min VOLTAGE, Current & Power Factor, Frequency, Daily Energy Consumption, Power Cuts and Duration were not available. Live Load in Watts was introduced after years of Struggle.

5.     In 2003 itself – Second Display of Smart Meters in Living Room of Consumers was available but not Offered to ALERT Consumers about CONNECTED LOAD.

Reliance Power executive blame Consumers for Their MISTRUST of Smart Meters, which they had already INSTALLED as Electronic Meters – These Meters RUN Fast, 60% Fast.

Reliance Power executive further alleged that My Testing of Meters was for 100W Lamp – It was PHILIPS Lamp tested to be consuming 100W at 230V.

RWA were advised in 2005 to use LAMP TEST by Switching Of All Connected Load – engaging LINEMAN – Heavy Load required CONNECTING between Meter and MCB – Violated Supply Conditions -  BRPL could register THEFT CASE.

It was also ALLEGED that Consumers with Sanctioned Load of 1-2 KW Run Air-conditioners – actually BRPL Connected Load yesterday was 12,000+ MW, Peak Demand was 2321 MW and Minimum Load was 1345 MW.

Amazon Smart-TV installation team was ready before Delivery – but BRPL is Different.

When there is HT Cable Breakdown – Consumers of the HT Feeder suffer Frequent Breakdown of power. After some days CABLE FAULT Location is identified, Another Team comes next day for Digging, another day CABLE JOINTER Team comes to JOIN The Cable, another day a team comes to Restore the Dug Up area.

When an OLD TRANFORMER develops some Problem – Consumers face frequent Disruptions – A STANDBY Transformer taken from JUNK YARD is Brought and Connected – Transformer in Use is Sent for REPAIR – another day Brought back and Re-Installed.

In Conclusion it was ADMITTED – BRPL+ failed to EDUCATE CONSUMERS ABOUT DEMAND SIDE MANAGEMENT POSSIBLE WITH SMART METERS SINCE 2003. Reason All initially and Many Consumer FRIENDLY were Disabled, in 2003 – Second Meter Display could have been provided in Living Rooms like Wall Clock – reminding consumers all the time about Connected Load.

Ø We could have TOLD Consumers to Avoid or Delay switching on Air Conditioners, Geysers, Booster Pumps, Washing Machines when FREQUENCY of power supply is 49.9 per second or less prefer when 50.1 or more, but feature was DISABLED.
Ø We could have PARTNERED with 1% Largest Consumers who have GENERATORS for Load Management than affecting 100% Consumers.