Innovation is the key to enhance Online Travel & Tourism Industry

New Delhi, June 10, 2012: The online Travel & Tourism industry is set for unprecedented growth provided payment and logistic issues are resolved. Speaking at the 4th IAMAI Travel & Tourism Summit, Himanshu Singh, Managing Director, Travelocity India & Chairman, Digital Commerce Committee, IAMAI, said, “The total travel market is around $800 billion, the online share is growing rapidly. Payment and Logistics still pose a challenge and success parameter of business is about cracking these problems. These problems that we are facing today have to be countered by all players of the industry together, and this will help the market grow exponentially.”

Speakers at the Summit were unison in their view that while, at present, group travel is the key to growth, the future will be more individual traveler dominated. Sharing her thoughts, Swati Moha, Vice Pesident – Programming & Operations, Fox International, said, “While group travel is in vogue, there is a huge spurt in customized individual travel interests. People are looking for less explored destinations than before and with internet penetration on the rise, the industry is set for robust growth.”
Globally travel & tourism market is pegged at about US$ 800 billion, the online market share has not reached its optimal point. With internet users in India at around 121 million, focus is now to create a solution for travellers to plan travel online. “Innovative marketing strategy coupled with value additions will sway travellers to book hotels and tickets online”, said Devdutta Banerjee, Regional Director – Revenue Management, India, Bangladesh and Nepal, Starwood Hotels & Resorts. He further added, “Online is the platform for growth. Integration of logistics and services is necessary to fuel further growth.”

The Internet and Mobile Association of India [IAMAI] is a young and vibrant association with ambitions of representing the entire gamut of digital businesses in India. It was established in 2004 by the leading online publishers, but in the last eight years has come to effectively address the challenges facing the digital and online industry including mobile content and services, online publishing, mobile advertising, online advertising, ecommerce and mobile & digital payments among others.

Eight years after its establishment, the association is still the only professional industry body representing the online and mobile VAS industry in India.

The association is registered under the Societies Act and is a recognised charity in Maharashtra. With a membership of 120 odd Indian and MNC companies, offices in Delhi and Mumbai, the association is well placed to work towards charting a growth path for the digital industry in India. 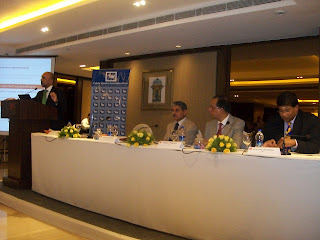 PM ideas of thrusting expenditure in infra with short term or long term ramifications where corruption is rampant and scale of money reaching the ground level is 15% plans needs its reinventions for things to happens in its wholesome.

Our government advisers talks are as if though we run flawless economy and our economy dwindles with the world economy  but when globe is in fiscal crisis we are not steel cased economy that will be not adversely impact us .Our domestic big market allows us to sustain the  economical cycle but to achieve its apex growth is definitely linked with globe.We are seeing  every month fall in production and inflation on rise to give way for stagflation in coming months.Rosy pictures are here drawn on every week but less work at ground levels thus blaming  and clinging to global stock market condition where speculators play their money irrespective of results and their ploy on rumors is well known across the globe.
Economy keys parameters are to provide basic needs at low cost and high tech has its price,the the goal of creating employment not on temporary  basis but on regular and with continuity is the art of pushing economy to its prosperous levels. The art of developing the skill of peoples needs greater attention in the coming years and enterprising skill needs a killing  with people longing for business adds to the employ ability in natural course of development.
Chief economic advisor Kaushik Basu has warned that if the Eurozone breaks up finally, it will be more disastrous than the 2008 global financial crisis triggered by the fall of the Wall Street banks, from which the global economy is yet to recover.

"If Europe does slip into a crisis, it is going to be a very difficult time. There is no escaping from that. Though we (government and the Reserve Bank) have a team that is working on different scenarios, to see how we will react, it will be a lie to say that we have the strength to weather that. It will hit us in the face," Basu told an Exim Bank organised here over the weekend.

Stating that a deeper European crisis was not impossible, he said there would be a jolt and it could spin Europe into a big crisis. "It is going to be a difficult one or two years for the world for sure."

However, he said on the positive side, "Thankfully, Europe is no longer our biggest export destination, to the Middle East we probably export more today."

Citing how the Lehman fall engulfed the whole world in 2008, Basu said, the 2008 crisis made it clear it is not just from the goods directly being sold, but the crisis in the financing sector that the world got engulfed.

Explaining the rationale for his fear on the global front, he said the problem will arise in 2014, when the LTRO (long term refinancing operations of the European Central Bank or ECB) payback comes in December 2014 and February 2015, when as much $1.3 trillion need to be paid by 800 banks to the ECB. This will sap the entire banking system, he warned.

However, Basu expressed hope that by 2015, the world economy, especially the emerging economies, will be better off by that time, saying "the emerging economies are in a position to build strength (during this interval) so when we come out of this tunnel, we will be at the top of it. We will come out on top of growth drivers by 2015."

The over two-year old Eurozone crisis, triggered by the sovereign debt crisis of Greece, is yet to be resolved and more and more countries are looking for bailout. The latest to join the bailout club is Spain.

On the impact of a possible Greek exit from the Euro, which looks more likely now (which will be clear after the crucial June 17 reelections) on the domestic economy, Basu said, "We are not out of the woods. There is indeed some risk that this is going to last a while. It will affect us."
at June 10, 2012 No comments: