Ahead of Friday's hearing on the age row, Army Chief Gen V K Singh on Wednesday placed before the Supreme Court additional documents to support his case for restoring his date of birth as May 10, 1951.

The documents filed by Gen Singh relates to the Army Rules on Commissioning of officers, his lawyer said.
The fresh documents have been filed two days ahead of the February 10 hearing on the petition filed by Gen Singh seeking to set aside two orders rejecting his plea.
The apex court on February 3 had given an option to the government to "withdraw" its December 30, 2011 order rejecting his statutory complaint, saying it "appears to be vitiated".
Giving the government a week's time and posting the matter for further hearing on February 10, the Court said there were other remedies available for Gen Singh if the government withdraws its December 30, 2011 order.
"Be clear whether you want to withdraw this December 30 order, or we quash the order," the court had said at one point prompting Attorney General G E Vahanvati to say he would take instructions from the government.
Posing questions to the government, a Bench comprising justices R M Lodha and H L Gokhale had said in that case Gen Singh's statutory complaint against July 21 order can be reconsidered by the authorities and there was also an option for him to approach the Armed Forces Tribunal or the High Court.
However, later the bench observed that approaching the Tribunal would not be the best option as only four months are left for him to retire.
It also said that though the tribunal is headed by a retired judge of the apex court, there are also members who come from the services and there is a possibility that they could either be junior or senior to Gen Singh at some point of time.
The apex court felt that the December 30 order rejecting Gen Singh's statutory complaint for treating his age as May 10, 1951 was vitiated as the decision taken by the authority was in consultation with opinion of the Attorney General on whose opinion also the first order was passed on July 21 last year.
Gen Singh had moved the apex court in January this year accusing the government of treating him in a manner reflecting total lack of adherence to procedure and principles of natural justice in deciding his age.
The Army Chief took the unprecedented step of dragging the government to the apex court after the Defence Ministry had insisted upon treating May 10, 1950, as his official date of birth, necessitating his retirement on May 31 this year.
Challenging the government's decision to determine May 10, 1950, as his date of birth, Gen Singh, in a 68-page petition, has maintained that his acceptance of 1950 as the year of his birth was given in good faith at the behest of the then chief of Army Staff and not due to agreement with the conclusion of the Military Secretary's Branch.
"The respondent (government) needs to explain as to why the senior most officer of the Army could be treated in a manner which reflects total lack of procedure and principles of natural justice and that too on an opinion obtained from the Attorney General," his petition said.
Gen Singh stated that the government's action and conduct in refusing to accept his contention on his birth date was affecting his image before the general public and the armed forces. It was his right to have a "dignified life", he pleaded in the petition, adding that an army chief has "a right to retire with dignity".
Referring to the ministry's orders of December 30 and earlier rejecting his case, the Army Chief has said that these orders have "conveniently ignored" his matriculation certificate, entire service record including entry into service, promotions and annual confidential reports.
He has stated that being a highly decorated officer, he had received all his awards, decorations and promotions as per the date of birth being 10.5.1951.
at February 09, 2012 No comments: 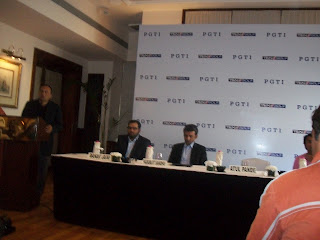 New Delhi, 9th February 2012: The US$ 4 bn Avantha Group, in collaboration with the European Tour, the Asian Tour and the Professional Golf Tour of India (PGTI), has announced the schedule for Avantha Masters 2012.
This highly anticipated tri-sanctioned event will be played at the DLF Golf and Country Club, Gurgaon, from 16th – 19th February 2012, while the Pro-Am is on 15th February. The tournament carries a prize purse of €1.8 mn.
The entry list is an impressive roll call of the who’s who of professional golf. As on date, players from Europe, Asia, Australia and the Americas feature in the entry list. Contenders include 57 European Tour players, 47 Asian Tour players and 22 PGTI players and six sponsor invites. A confirmed list will be made available early next week.
Needless to say, top Indian professional golfers will be there, vying for a title that was won last year by India ’s SSP Chowrasia. (Andrew Dodt of Australia was the winner in the inaugural edition in 2010). Some of the better known Indian professional golfers include Jeev Milkha Singh, who looks forward to 2012 to break into the top 100 world ranking; Gaganjeet Bhullar; winner of BILT Open 2011 Chirag Kumar; and Himmat Singh Rai.
Mr Yogesh Agarwal, MD & CEO, Ballarpur International Graphic Paper Holdings B.V. (BIGPH), said – “The Avantha Masters is one of the most coveted tournaments played out in our country. In the last two editions, we received tremendous spectator response. To make it more interesting, we are offering free entry for golf lovers to come and experience this magnificent world-class event.”
The Avantha Masters’ increasing popularity cements golf’s reputation as the fastest-growing sport in the country, and firmly places India on the international map of golf destinations.

About Avantha:
The US$ 4 bn Avantha Group is one of India ’s leading business conglomerates. Its successful entities include BILT, Crompton Greaves, The Global Green Company, Avantha Power & Infrastructure, Solaris ChemTech Industries, Biltech Building Elements, Salient Business Solutions, and Avantha Technologies. With an impressive global footprint, Avantha operates in over ten countries, employing 20,000 people worldwide. The Group has business interests in diverse areas including power transmission and distribution equipment and services, paper and pulp, energy and infrastructure, food processing, farm forestry, chemicals, IT and ITES. Led by Gautam Thapar, Avantha demonstrates strong leadership globally and emerges as a focused corporate, leveraging its knowledge, leadership and operations, adding lasting value for its stakeholders and investors. For more information on Avantha group, please visit   www.avanthagroup.com.
About PGTI
Formed in 2006, Professional Golf Tour of India (PGTI) is the recognized official body of professional golf in India . PGTI’s objective is to promote professional golf in the country as well as give players an opportunity to be involved in decision making for all aspects of the game. Headed by Mr. Gautam Thapar (President), PGTI’s governing body comprises of leading Indian golf professionals such as Jyoti Randhawa, Shiv Kapur, SSP Chowrasia, Digvijay Singh, Uttam Singh Mundy, Amritinder Singh and Ranjit Singh. PGTI currently has over 300 members.
at February 09, 2012 1 comment:

Networking Dinner with Victorian Super Trade Mission 2012
21st Feb, 2012, Durbar Hall, Taj Palace Hotel, New Delhi
We are delighted to inform you that a 200 member business delegation from the State of Victoria, Commonwealth of Australia is visiting India in February, 2012. On this occasion FICCI is organizing a networking dinner with the visiting delegation as per the following schedule: