The EU on Monday urged all sides in Venezuela to abstain from violence and seek a political solution as the death toll mounts in clashes between the government and opposition. Protests against leftist President Nicolas Maduro demanding early elections have left 38 dead since April 1, with many hundreds wounded and arrested. The EU said all parties should work towards a settlement which would allow “the establishment of an electoral calendar.” Mediation efforts have got nowhere, polarization has increased, and the economic and social situation in the oil-rich country has got worse, said a statement approved by EU foreign ministers meeting in Brussels.
Alliance Française de Delhi & Studio IF
present

Thursday, 25th May 2017, 06:30pm
M. L. Bhartia Auditorium, Alliance Française de Delhi
—————————————————————————–
– About Design X Design –
Design in its many manifestations forms an integral part of every culture. Civilizations evolve and attain their full potential because of it. Design based creative communities in India are witness to a fascinating churning, necessitating a search for a vision that may inform their evolution beyond – spanning education, profession and the industry. Thus, involving exposes, roundtables, exhibitions etc. Design X Design is a step in that direction.
The energy behind the design of a pin or a city being the same, this joint initiative of Alliance Francaise de Delhi and Studio IF is also geared towards raising levels of appreciation within and nurturing connections across various creative communities – architecture, urban/ landscape/ interior design, product/ industrial design, textile/ fashion design, graphic/ communication design etc. Local and global in outlook, it is directed at the initiated and the uninitiated alike.
– About the D X D Exposé –
A linking bimonthly two-hour long activity involves sharing of high quality professional work of designers from the Delhi and other cities of India, in a neutral, friendly and open environment. Each Expose’ generally consists of presentations made by two designers, each drawn from habitat design (architecture/urban/landscape/interior design) and non–habitat design (product / communication / apparel design) respectively, culminating in an open discussion and Q & A.
About the Presenters:
Paul Sandip, Product Designer
Paul is a designer of everyday objects. He lives and works out of PAUL STUDIO in Noida. His consulting business caters to Multinational Companies, Micro & Small Scale Entrepreneurs and Start Up’s. Winner of Red Dot Award (twice) and numerous international awards his work has been extensively published / exhibited internationally including the Triennale Museum in Milan, Ambiente Fair in Frankfurt, Red Dot Award Show in Singapore, Avenue of Stars in Hong Kong, Lite‐On Awards Show in Taiwan, Design Korea Exhibition and Design Olympiad in Seoul. His work was also selected by Art Besel, Hong Kong for their exhibition “Design with Character”. Paul has been honored by Shri Narendra Modi in 2005 & President of Taiwan Mr.Ma Ying‐jeou in 2010 for his simple yet innovative ideas concerning public welfare. His work is held in the permanent collection of Danish Design Museum, Copenhagen, as an example of Design to improve life.
Meena Mani, Architect
Meena Mani started her carrier in 1971 at the office of renowned architects Kanvinde & Rai, New Delhi. From 1981 she worked as a Senior Architect & later as a Senior Consultant with Stein Doshi & Bhalla, New Delhi where she was responsible for co-ordination in the studio as well as at site of prestigious buildings including the India Habitat Centre, New Delhi.
She was a partner in the architectural firm Mani Chowfla (started originally as  Stein Mani Chowfla) where she has designed, co-ordinated and supervised construction of many large and medium sized projects including Housing, Institutional, Educational and Corporate Office buildings in a variety of contexts.
Meena Mani has been on the Visiting Faculty as well as been thesis guide to students of various institutions including Roger Williams University, U.S.A, School of Planning and Architecture, New Delhi, TVB School of Habitat Studies, New Delhi, Sushant School of Architecture, Gurgaon and the New Delhi Polytechnic for Women, Delhi.
She now practices under her own name – Meena Mani and is also visiting faculty at the School of Planning & Architecture, New Delhi.

I am forwarding my article titled ‘Bite the bullet on banks’ that appeared in “Mail Today” on 12th May 2017 (Friday).

Your feedback and response are as always welcome.
Best Regards,
Rajiv

131 new and young players getting groomed through grass root programme in Mumbai
MUMBAI, May 15, 2017: VIVO Pro Kabaddi has witnessed a phenomenal growth over the last 4 seasons, and has emerged as a benchmark for sports leagues in India. For Season 5 of the league – which recently welcomed 4 new teams – seven franchises have announced names of select elite players who have been retained by them. Some of the leading names in VIVO Pro Kabaddi, given below, are set to be back in action in the biggest sports league in the country.

The teams and the list of player retained by them are as follows:

Anupam Goswami, League Commissioner, VIVO Pro Kabaddi said, “It is very interesting to see these players being retained by the franchises and there are some surprises as well. It shows that the franchises are evolving as they look for the winning formula that will help them lift the coveted VIVO Pro Kabaddi Season 5 trophy. I look forward to the auctions to see the compositions of the new teams, young players being drafted and the approach of the new franchises.”

Quick Facts:
·         Anup Kumar (U Mumba) – Recurring captain of U-Mumba for the past 4 seasons. Awarded Most Valuable Player in season 1. Led U-Mumba to 3 finals, winning the trophy in Season 2. Also captained India in the Kabaddi World Cup.
·         Rahul Chaudhari (Telugu Titans) – Most successful raider in PKL history. Awarded the best raider title twice – in seasons 1 and 4. The only player to score 500 points (total) in PKL history.
·         Pardeep Narwal (Patna Pirates) – Most exciting, successful young talent in PKL. Bagged the Emerging Player Award in Season 3, Most Valuable Player in Season 4. And, 2-time champion with Patna Pirates. The youngest player to be retained at 20yrs of age.
·         Jang Kun Lee (Bengal Warriors) – South Korean raider, representing Bengal Warriors for 4 Seasons now. Has scored most points for an international player in PKL history.
·         Meraj Sheykh (Dabang Delhi K.C.) – And all-rounder from Iran. Captain of Dabang Delhi K.C. in Season 4 and also captained Iran to the Kabaddi World Cup finals.
·         Deepak Hooda (Puneri Paltan) – All-rounder, and known for scoring the 3rd highest raid points in PKL Season 4. Also, the most successful raider for Puneri Paltan in the same season.
·         Ashish Kumar (Bengaluru Bulls) – Defender. The only category B player to be retained this season. 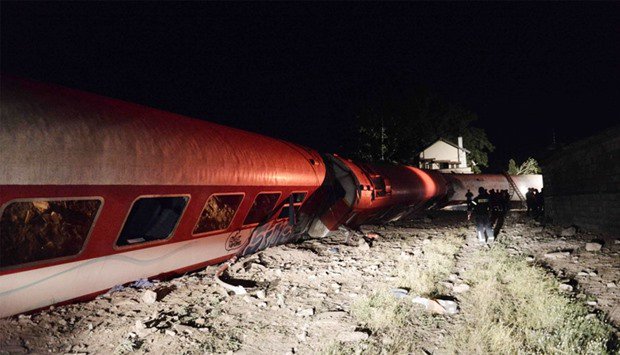 The train, traveling on the Athens-Thessaloniki route with 70 passengers, derailed at 9:45 p.m. (1945 GMT) Saturday in the village of Adendro, 40 kilometers west of the northern city of Thessaloniki. Its engine rammed into a three-story house, exiting on the other side.
German Chancellor Angela Merkel’s conservatives scored a major upset in a key state election on Sunday, finishing ahead of the ruling Social Democrats (SPD) and boosting their hopes of retaining power in September’s federal vote, an ARD TV exit poll showed. The Christian Democrats (CDU) saw a strong surge of support in Germany’s most populous state of North Rhine-Westphalia (NRW), where the SPD has ruled for most of the post-war years. The CDU won 34.5 percent, up from 26.3 percent in 2012, according to an exit poll on public broadcaster ARD just after polls closed. The SPD fell to 30.5 percent from 39.1 percent. It was the third straight state defeat for the SPD since March, casting a shadow over their once bright hopes of denying Merkel a fourth four-year term on Sept. 24.
There is reliable information that the MoEFCC would approve GM mustard for commercial cultivation today.
Those of you who are concerned about these developments are requested to certainly pick up the phone (several times if required, if you can’t get through to them the first time around) and call up the PMO and register your opposition to GM mustard approval in India clearly.
Demand that the application SHOULD BE REJECTED. Please ask them to note down your message and pass on to the PM, Shri Nripendra Mishra (Principal Secretary in PMO) and Dr PK Misra (Additional Secretary in PMO, agriculture person). Please speak politely and if possible, state your reasons for opposition clearly.
The phone numbers to call: Phone +91-11-23012312 (PMO general line – one Mr Sanjeev Kumar Singla and a Mr Rajeev Topno are Private Secretaries to the PM)
+91 11 23013040 : Shri Nripendra Mishra, Principal Secretary to PM
+91 11 23014844: Dr P K Mishra, Addl Secretary to PM
KAVITHA KURUGANTIAlliance for Sustainable & Holistic Agriculture (ASHA)Office:A-124/6, First Floor, Katwaria Sarai, New Delhi 110 016Residence:# 302, Santhome Apartments, 33/1, 1st A Cross, Indiranagar I Stage, Bangalore 560 038
May14, 2017 (C) Ravinder Singh progressindia2015@gmail.com
Instead of Factually Reporting Decline of Power & Energy Sectors, Piyush Goyal is FABRICATING Fake Growth story.

As can be seen from Clippings from PFC reports Revenue Growth in Power sector was just 11.79% in FY15 second lowest in 10 years. Growth in Energy sales was 8.16% which in FY17 was just 4.72% conventional power.

Exports performance too is pathetic 4.7% growth in FY17 but no Growth in Rupee Terms, 2 Yrs details points to Negative Growth in 25 of 31 product lines.

Exports of Engineering & Electronics sectors at below FY12 level is particularly disappointing when all efforts to boost these two sectors had flopped.

Bank Deposits growth is at lowest in 10 years after Global Economic Crisis.

Real Estate sector is in DEEP Crisis, few buyers even at discounted prices.

Agriculture was worst affected – Five out of Six Seasons growth was negative from FY14.

All are welcome.
Kapil Mishra has accused Delhi Chief Minister Arvind Kejriwal of laundering money and having hawala links.He has also alleged that Kejriwal and his close aides are involved in converting black money into white.
Addressing a press conference in New Delhi on Sunday, Mishra presented some documents to support his claims. He also said that the AAP has concealed donation details of three years from Election Commission and has given false bank details to the poll body. He said he will approach CBI with these documents.
The former Delhi Minister also alleged that Mohalla Clinics run by Delhi government is a big scam.
Kapil Mishra said it is clear the revelations suggest that Arvind Kejriwal is corrupt.