4 hrs
Quake of 6.4 magnitude hit western Argentina : Further details of the tremor are awaited.
A strong quake hit western Argentina, shaking buildings as far away as Santiago, the capital of neighboring Chile, which the US Geological Survey said, was a magnitude 6.4 though there were no reports of damage to people, infrastructure or basic services. Chile’s Navy has ruled out a tsunami after the quake. Both Chilean and Argentine authorities said, there were no reports of injuries or damage. The quake’s epicenter was 24 km southwest of the Argentine town of San Juan. The tremor was initially reported as a magnitude 6.7 but was later downgraded.
at November 21, 2016 No comments: Links to this post

New Delhi, November 21, 2016: Bringing all of the Internet to all people, especially the poor, is one of the greatest challenges of our time, and future innovations to connect the unconnected must adhere to the tenets of Equal Rating, said Jochai Ben-Avie, Senior Global Policy Manager at Mozilla at a panel discussion here last week.

“While TRAI has recognized that some business models are too harmful to competition and users to be allowed in the market, the very real challenge of bringing all of the Internet to all people remains. To advance this goal, Mozilla’s ‘Equal Rating Innovation Challenge’ is designed to catalyze new thinking and innovation in providing affordable access and cultivating digital literacy,” Ben-Avie said.

The expert panel discussion was organized by Mozilla in partnership with SFLC.in and followed the organization’s recent Equal Rating Innovation Challenge launch announcement.

"The debate around Internet openness and access has been playing out in India like nowhere else, and Equal Rating models can help to bring the Internet to all in line with TRAI’s regulation. Building on Mozilla’s strong commitment to net neutrality, the central tenet of Equal Rating models is that they treat all content equally, and that users are able to choose the content they want to see based on the quality of that content and not the commercial relationships of a given provider,” Ben-Avie added.

Calling Mozilla’s challenge a real “game changer” which can help bring the next 300 million Indians online, Mahesh Murthy, Founder of Pinstorm, co-Founder at Seedfund and one of the panelists said, “I was part of the team that helped fight Free Basics – because it simply gave too much power to one company. But I was always cognizant of the need for the less privileged to get free Internet access. We want companies to come up with solutions that offer free net access, without the restrictions – and with the freedom for a user to visit any site she chooses. I’m glad to see that Equal Rating offers exactly that: plan to offer a certain amount of free and unfettered Internet access to all users, without restrictions or bias.”

Mishi Choudhary, Executive Director at SFLC.in and a panelist said, “Connecting the unconnected while propagating the values of an open Internet is what we all must work for. Mozilla’s challenge is the correct way to solve the problem of access. I hope for more such initiatives to be rolled out and we can address the challenge innovatively to educate every being on earth through an open Internet.”

“India has shown the world that it can protect the openness of Internet in the TRAI ruling earlier this year,” Smriti Parsheera, Consultant at National Institute of Public Finance and Policy and a panelist said. “The global community has taken note of India as a country where even before any reference framework on net neutrality existed, the regulator took a view on ‘zero rating practices’ and ‘discriminatory pricing practices’, leading to a roll back of Free Basics,” Parsheera added.

The Equal Rating Innovation Challenge will support promising solutions through expert mentorship and funding of US$250,000 in prize monies split into three categories - Best Overall (based on scalability), Best Overall Runner-up and Most Novel Solution (based on experiment with a potential high reward). Submissions are now open through January 6, more information is available at www.equalrating.com
___________________________________

About Mozilla:
Mozilla is a pioneer and advocate for the Open Web for more than 15 years. We create and promote open standards that enable innovation and advance the Web as a platform for all. Today, hundreds of millions of people worldwide use Mozilla Firefox to experience the Web on computers, tablets and mobile devices. For more information, visitwww.mozilla.org.

About SFLC.In:
SFLC.IN is a donor supported legal services organisation that brings together lawyers, policy analysts, technologists, and students to protect freedom in the digital world. SFLC.INpromotes innovation and open access to knowledge by helping developers make great Free and Open Source Software, protect privacy and civil liberties for citizens in the digital world by educating and providing free legal advice and help policy makers make informed and just decisions with the use and adoption of technology. SFLC.IN is a society registered under the Societies Registration Act, 1860, operating all over India.

Contact person:
Vidhu Goyal
CNC India Pvt. Ltd. (on behalf of Mozilla)
at November 21, 2016 No comments: Links to this post 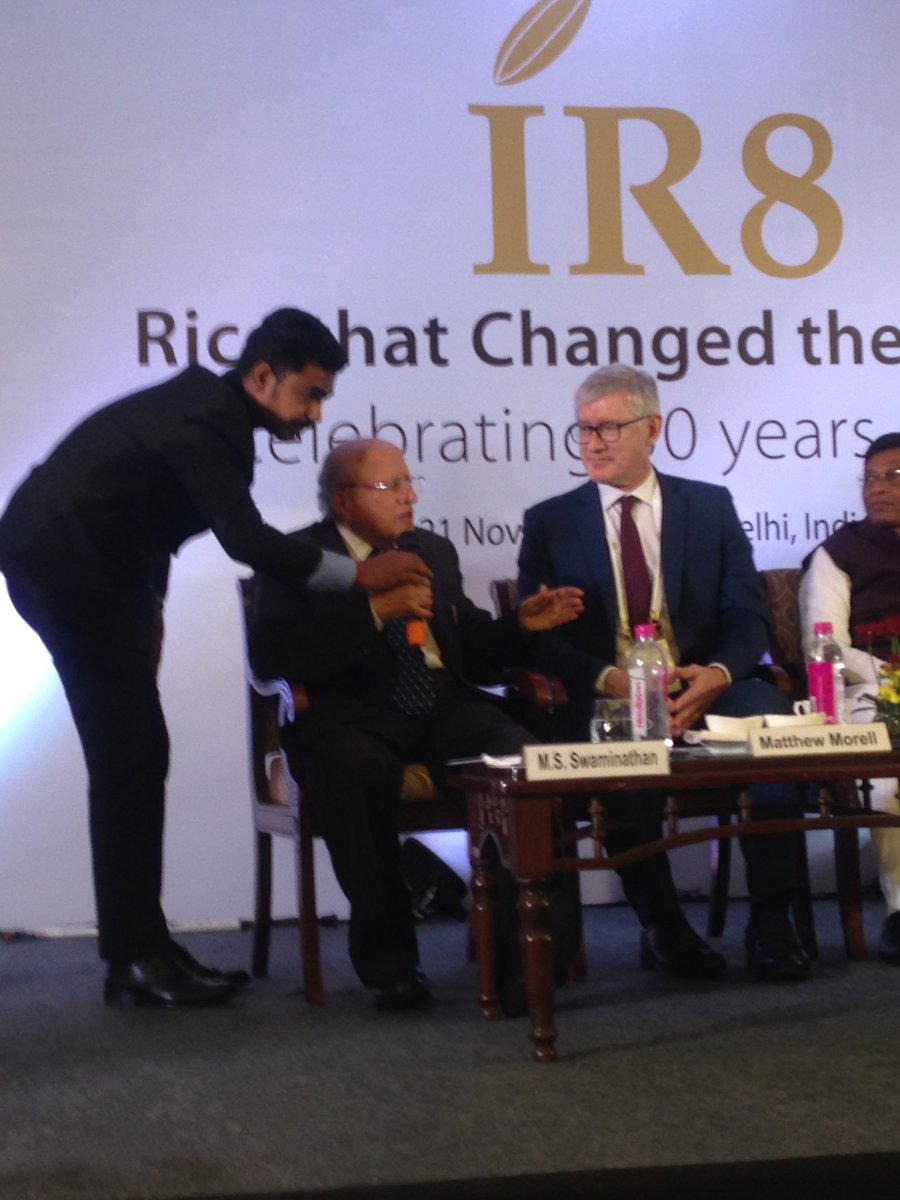 LOS BAÑOS, Philippines – November 2016 marks the 50th anniversary of IR8; the world’s first high-yielding rice variety and the first rice variety released by the International Rice Research Institute (IRRI).
IR8 sparked the Green Revolution in Asia—a phenomenon that saved the region from famine in the 1960s and 70s. This scientific innovation was soon followed by other high-yielding varieties that each offered increasing vigor and resistance to pests and disease—the major scourges of that period. These varieties were also adaptable where they were most urgently needed: the Philippines, Vietnam, Myanmar (then Burma), Cambodia, Indonesia, Malaysia, and the biggest of them all—India.
A series of global events will take place in New Delhi on November 21 and at IRRI headquarters in the Philippines on November 29 to commemorate this milestone in food security.

In the 1950s, Asia was on the brink of famine and millions of people were in danger of starving. In 1960, IRRI was established with one pressing mission: to develop high-yielding rice varieties.
Thus began intensive research and breeding work that sought ultimately to enable the production of more—much, much more—rice than previously possible in order to stave off predicted mass food shortages across the continent.
IR8 is the first offspring of these efforts. It is a semidwarf rice and was the result of a cross between Peta, a tall vigorous variety from Indonesia, and Dee-geo-woo-gen, a dwarf variety from Taiwan.
In the 1960s, average yield in the Philippines was at about a ton per hectare. In initial tests at the IRRI fields in Los Baños, IR8 produced an average of 9.4 tons per hectare.
In the business of growing food, this breakthrough is no small deal. The Philippine press dubbed the grain a befitting “Miracle Rice.”

Earlier this year, Prime Minister Narendra Modi launched a seven-point strategy that aims to double rice farmers’ income and reduce rural poverty by 2022 through innovations in food and farming.
This strategy will propel India’s vibrant rice sector onto another promising trajectory, made possible by a rich history in plant breeding innovation.
In the late 1960s, IR8 was introduced in India at about the same time another variety, ‘Jaya,’ was released. Quick field evaluations and rapid promotion of the two varieties by the Indian government, with the help of some pioneering Indian farmers, started the country’s own Green Revolution in rice.
Jaya, bred from an IRRI-introduced variety and an indica variety, is a high-yielding semidwarf rice that produces long, bold grains—preferred qualities of the Indian palate. It was a product of intensive breeding under the All-India Coordinated Rice Improvement Project (AICRIP), a collaboration between India and IRRI launched by the Indian Council of Agricultural Research(ICAR) in 1965.
The event on November 21 will celebrate this rich history and features a panel of global experts to speak on the future of the rice industry.

Back where it all started

In the Philippines, where IR8 and succeeding high-yielding rice types had their first real-world tests, the 50th year celebrations will be held in a Farmers’ and Partners’ Dayat the IRRI headquarters in Los Baños on November 29.
Agriculture Secretary Manny Piñol will be presenting the Philippine government’s rice program in a session. The Philippine Department of Agriculture is a staunch partner of IRRI in its mission and in the IR8 commemoration.
Peter Jennings, who led the breeding team that developed IR8, will be coming to speak about IR8 and the revolution it catalyzed.
at November 21, 2016 No comments: Links to this post