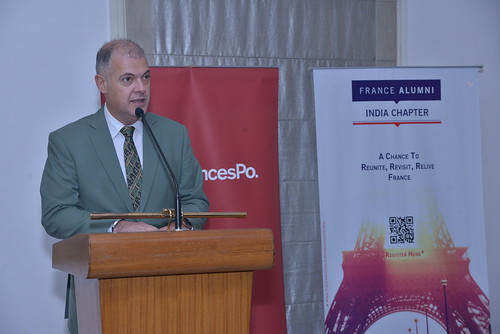 New Delhi, 16 January 2017
Sciences Po. Paris, the leading French Social Sciences university, celebrated 10 years of its presence in India. Ranked 4th for Politics and International Studies in the 2016 QS world rankings, the top institution has developed significant cooperation with India, having inked MoUs with thirteen top universities and colleges, and opened offices in both Delhi and Mumbai.
To mark this anniversary, a reception was hosted at the Residence of France during which Dr Ashwani Kumar, MP (Rajya Sabha) and former Minister of Law and Justice, addressed Sciences Po Alumni and partners in Delhi.
On this occasion, Ms Laurence Souloumiac, Head of Sciences Po. Centre for Asia, and Ms Marie Azuelos, International Affairs Manager, from Paris, along with India Delegates Neha Khanna and Sophie Collet, interacted with members of the press to discuss the international outreach of Sciences Po., its collaborations with Indian institutions and companies, and its vision of social inclusion.
Sciences Po. is ranked 4th for Politics and International Studies in the 2016 QS world rankings, alongside Harvard University, Oxford University and the London School of Economics, and just ahead of the University of Cambridge. Its alumni include five French Presidents including François Hollande, 12 French Prime Ministers, 4 heads of the IMF, as well as many CEO and CFOs from the corporate sector. H.E. Shri Mohan Kumar, Ambassador of India to France, and H.E. Ms Chandrika Kumaratunga, former Prime Minister of Sri Lanka, are also Sciences Po. graduates.

Yesterday at 08:50
SciencePo university celebrate ten year in India at French embassy in New Delhi former Minister. Mr Ashwini Kumar  delivered lecture on Leadership.His talk on leadership with compassion for the people essential ingredient along with power and authority with Urdu couplers was palatable .He quotes three leaders which he encountered were fulsome with ethics value compassion.He listed former Late PM Chandershekhar, Late former Dy PM Devi Lal and Later Arjuna Singh former HRD Minister with potential tale of his ascend due to their actions. SciencePo is fourth ranked varsity in its faculty on the subject of Political science.Most of politicians and administration are from this reputed institution.With Indian youth getting the taste of such elite institution help in our daily life and political dynamic find drastic inertia with its professional navigation communication and organisational skill to galvanise the society of all classes. With more institution chapter in Paris,France the opportunities for Indian students too surge to get into world best institution to bring best culture for its people. French Ambassador in India and Consular spoke varsity high standard and ambience with multiple cultural crossing with great ideas and rich faculties with global repute and university on going expanded plan. washingtonpost.com – BRUSSELS — A top NATO general said Tuesday that aspects of the alliance were “obsolete,” echoing President-elect Donald Trump’s language and saying that the Western military alliance needs to adapt… english.yonhapnews.co.kr – SEOUL, Jan. 18 (Yonhap) — A close aide to President Park Geun-hye admitted Wednesday that he leaked classified information to a woman at the center of a South Korean presidential scandal, but clai…

europe.newsweek.com – The head of South Korea’s giant Samsung Group faces a long day in court Wednesday as a judge decides whether he should be arrested for bribery in a corruption scandal that has engulfed President Pa…

Hon’ble Minister of Railways Shri Suresh Prabhakar Prabhu unveiled Mission 41k during the Roundtable Discussion with External Stakeholders on Energy Initiatives of Indian Railways.
Ministry of Railways has come up with Mission 41k to save Rs. 41000 crore in the next decade in Railways’ energy costs. To implement this comprehensive strategy with the participation of various stakeholders, Hon’ble Minister said that they shall take advantage of regulatory frameworks, look at new technologies. He said that this is an opportunity to relook at everything and determine an ideal baseline. All electrification works done in the last decade would be doubled and this would change the energy mix of Indian Railways. Indian Railways has set a target of 1000 MW of solar power and 200 MW of wind energy.
Shri Prabhu also informed that around 15 – 16 Roundtable Conferences with Stakeholders are in the pipeline on various initiatives of Indian Railways. He said that a Round Table discussion is planned on Data Analytics. Indian Railways generates massive amounts of data and has a huge captive audience. Ability to optimally utilize these will generate additional revenue for the Indian Railways.
Chairman Railway Board, Shri AK Mital said that a target of moving 45% of the freight traffic can be achieved only when it can move freight in a cost efficient manner. By procuring electricity through open access, the cost of electricity procurement comes down drastically which contributes 25% of the working expenses. He also said that Ministry of Railways has launched Mission Raftaar to increase the average speed of movement by 5 kmph every year. Another important Mission for Indian Railways is the establishment of High Horse Power (HP) Locomotive manufacturing plants at Madhepura and Marhaura.
Ministry of Railways want to take electrification to 90% in next few years through our Mission Electrification with an aim to reduce dependence on imported fuel, change energy mix, and rationalize the cost of energy for Railways. As part of this, it has embarked upon electrification of additional 24,000 Rkm, i.e. about 90% of Railway BG routes in next 5 years by taking the present rate of electrification from 2000 Rkm to 4000 Rkm in next 2 years. To achieve this, Ministry of Railways have planned to incorporate EPC Mode of Contracts for Railway Electrification Projects, mechanize the execution through Self Propelled Wiring Trains etc. This will increase the mobility, reduce energy bill to improve viability of Railways and also reduce carbon footprint. Ministry of Railways wish to develop partnership, improve our delivery of electrification projects by having suggestions from industry.
The Roundtable Discussion was attended by members and senior officials from the Railway Board and representatives from various Government and Private agencies in the field of energy, International Experts and Industry Associations.