Russia’s opposition leader has been barred from challenging Vladimir Putin in the presidential election next March.
The Central Electoral Commission on Monday ruled Alexei Navalny ineligible for running in the election because of a conviction on embezzlement charges in February. Navalny has dismissed the charges as fabrications.
In an online video message, Navalny says the election will feature only Putin and candidates the president has personally selected. Navalny urges his supporters to boycott the vote.
Navalny is a leading critic of Putin and anti-corruption activist. He is popular among younger Russians.
He called for demonstrations this March to protest alleged corruption in Putin’s administration. More than 10,000 people took part in the rallies.
Putin criticized Navalny earlier this month, saying that the opposition leader is trying to destabilize the country.
Calls to boycott the presidential election in Russia scheduled for March 2018 should be checked for compliance with legislation, presidential spokesman Dmitry Peskov said Tuesday. He was commenting on the stance of activist and blogger Aleksey Navalny, who was denied registration as a presidential candidate, TASS said. “Calls for a boycott should, of course, be thoroughly studied in terms of compliance or contradiction with our legislation,” Peskov said.
Media agencies
Saffron leader, Jai Ram Thakur took oath as the Himachal Pradesh chief minister in presence of dignitaries across nation from the BJP ruled states. Himachal cabinet, 10 ministers also took oath today .

Badals using dirty tricks to capture Patna committee:
Badals’ moves driven by saffron agenda
S. Sarna Badals’ moves driven by saffron agendaNEW DELHI, Dec 27 — Out of power and relevance in political sphere, the Badals have put their dirty-tricks department on top gear to capture the management committee of Takht SriHarmandar Sahib Ji, Patna Sahib, SADD secretary-general Harvinder Singh Sarna has noted.”They are using every possible means, including pressure tactics of their allies in the ruling NDA, to dislodge Panthak representation from the Patna Sahib committee,” S. Sarna observed. He cited the role of Bihar’s Attorney-General who had the audacity to ask the bench presiding over the election case to push back the date of the next hearing.To our utter surprise,” we saw and heard an AG demanding a date of his choice from the justices in what was perhaps unprecedented in the history of Indian judiciary,” the SADDleader said.The AG, he revealed, asked the bench to post the next sitting for January 8.”We have no complaints against Bihar chief minister Nitish Kumar. But we can very well understand the pressure he could have been under to order his state’s AG to ask for as specific date. This shows how desperate the Badals are to capture the Patna Sahib committee into their stranglehold,” S. Sarna said.The Jan 8 date, he added, was sought with an insidious aim to keep Panthak representation and monitoring away from any possible violation of Guru Maryada during the current gurpurab events at the birthplace of Guru Gobind Singh Sahib.”The Badals are driven by the bigger saffron agenda. They are trying hard to undermine,belittle and wipe out every pro-Panth voice. But our faith in Guru Sahib is firm. We are confident justice will be delivered, sooner or later. The Panth will ultimately emerge victorious.
‘Sonu Ke Titu Ki Sweety’ star cast launched their first song featured by Honey Singh, in Delhi! 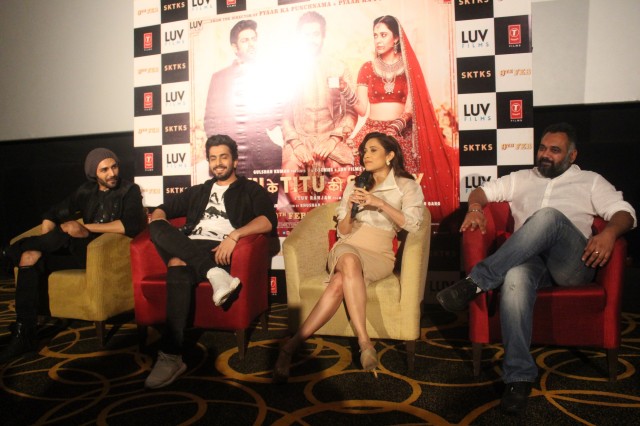 The exciting star cast of upcoming comedy-drama flick Sonu Ke Titu Ki Sweety was witnessed in New Delhi at PVR Select City, Saket, for the first song launch of their movie. This special party track of Luv Ranjan’s upcoming film is Honey Singh’s comeback song which is a reprised version of the 1990s hit number by Hans Raj Hans, “Dil Chori Saada Ho Gaya”. The all three actors – Nushrat Barucha, Kartik Aaryan, and Sunny Singh along with director Luv Ranjan were present for the launch.
Yo Yo Honey Singh’s much-anticipated comeback track ‘Dil Chori’ is finally released, the Yo-Yo Swag along with the performance of cast left no bars to make this song a sensational Punjabi wedding song of the season. Bringing back the Pyaar Ka Punchnama team together, Sonu Ke Titu Ki Sweety is co-produced by Bhushan and Krishan Kumar’s T-Series Films, and Luv Ranjan and Ankur Garg.
While interacting with media peeps the entire team seemed excited about the launch. They revealed how this film is declared as an open war between Bromance and Romance. About the “Dil Chori” track & Honey Singh’s comeback, Director Luv Ranjan stated, “Well, for preparing honey Singh for this song, the whole credit goes to Bhushan Kumar ji, because I actually dont know honey Singh closely, but Bushan ji made this possible to convinve Honey Singh to do this song for us.”
About the movie he said, “Nowadays Marriage is not about two families engaging with each other but for friends also it have a same feeling, so the concept of this film is about a clash a war between Bromance & Romance. I won’t reveal much about this movie …instead I would say just watch the movie you will understand the modern concept of marriage. You will see a tom & jerry chemistry in this film.”
Presented by T-Series and Luv Films production, and directed by Luv Ranjan “Sonu Ke Titu Ki Sweety” is slated to release on 9 February 2018.

Lt Gen B S Sahrawat, SM took over as the Director General of National Cadet Corps. The General was commissioned in the Indian Army in 1980 and has had a distinguished career in the Armed Forces.
THE NEW DGLT GEN BS SAHRAWAT, SM TAKES OVER AS DG NCCLieutenant General B S Sahrawat, SM took over the reins of National CadetCorps as its Director General.
The Gen Officer is a third generation army officer. He is alumnus of the NationalDefence Academy, Khadakwasla & Indian Military Academy, Dehradun. He wascommissioned in Dec 1980 in 13th Battalion (REZANG LA), the KUMAON Regiment.
The Gen Officer has done all professional courses to include the prestigiousNDC Course. He holds a Masters degree in Management Studies from OsmaniaUniversity, Hyderabad and M. Phil from Madras University. He has recently completedhis Ph.D. in “Human Capital Management in Army”.
He has served in numerous Staff & Command appointments in various parts ofthe country and abroad which includes the Military Observer in Iraq and Kuwait for ayear. He has been awarded the Sena Medal during the floods of Kosi River in Bihar in 2008 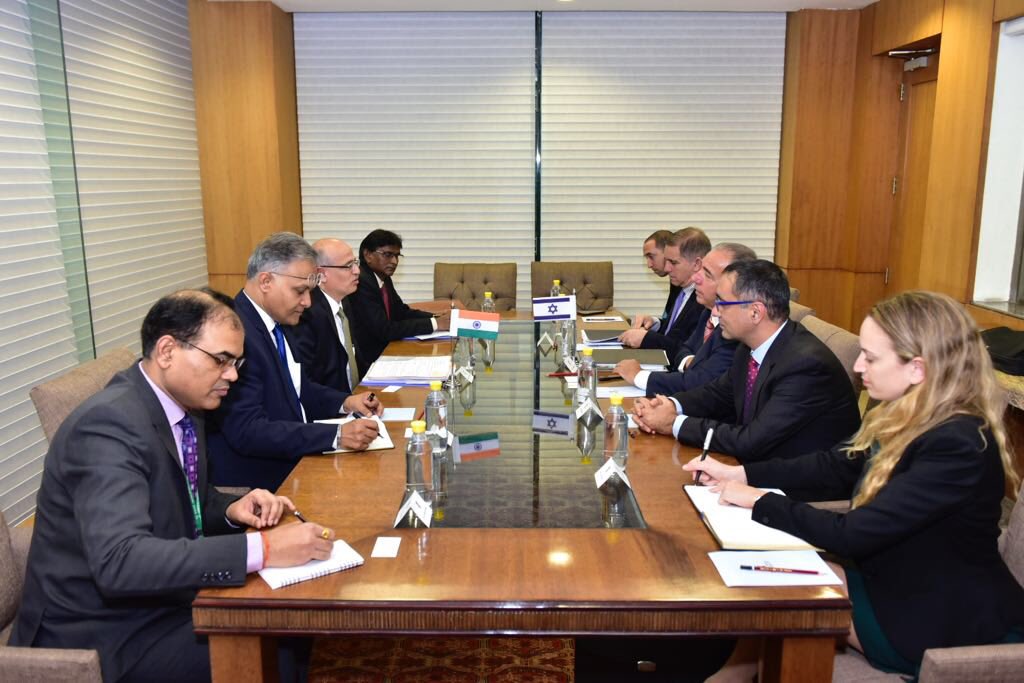 December26, 2017 (C) Ravinder Singh progressindia2015@gmail.com
Delhi Metro could have been world’s best and most profitable, Lowest Cost Mass Transit in the world but for Gross Incompetence of DMRC. I would have ensured >>
Ø 50% to 100% more people using DMRC Trains –Minimum Fare of Rs.5 for 4 km.
Ø Reduced cost of Construction by 30% to 50%, Check in at Ground Level,
Ø Ensured up to 50% faster speeds. Inter-Connected Lines – Not Stopping at few Stations at peak time.
http://www.delhimetrorail.com/OtherDocuments/Annual%20Accounts%20And%20Directors%20Report%202016-17.pdf
As per Annual Report DMRC Losses were just 4% or Rs.229 Cr on Revenue of Rs.5,388 Cr on March2017. There was absolutely no justification for Fare increase by 100%.
Urban Development Ministry is MILKING DMRC to fund Metro Projects in other parts of the country and Phase IV than Optimizing METRO Infra.
There are Four Lunatic Grade Blunders in DMRC Magenta Line –
1.   It is MOST LUNATIC – New Lines to haveStandard Gauge Tracks [1.435m] but with Broad Gauge Coaches [1.676m]. Mangu Singh has ensured all Coaches of Similar Size Can’t beINTERCHANGED between BG & SG Lines and New Line Tracks can’t be LINKED with Existing Broad Gauge Lines.
Ø Interchanges of DMRC are 10-50 Times Bigger Costlier Than London Metro – Switching Lines likeConventional Railways would have ensuredEXTENDED Connectivity Reduce Journey time – Improved Convenience.
Ø There is Seasonal or Peak Hour or EmergencyRUSH, Trains could be deployed or diverted through alternate routes.