The rate was up 0.1 percentage point from the previous year’s figure. That is the highest increase since President Joko Widodo was inaugurated in 2014.
Sales of cars and motorbikes rose year-on-year.
Officials also attribute the expansion to a series of large-scale events held in the country, including the Asian Games.
President Joko has been pushing his administration to develop infrastructure and attract foreign investment.
He is expected to stress his economic record when he aims for reelection in the presidential poll planned for April.
at February 06, 2019 No comments: Links to this post

Congress, US President Donald Trump  address played up his achievements and called for unity to achieve his goals. Trump gave his State of the Union address just two weeks after the end of a partial government shutdown caused by a dispute over funding for a controversial wall along the Mexican border. 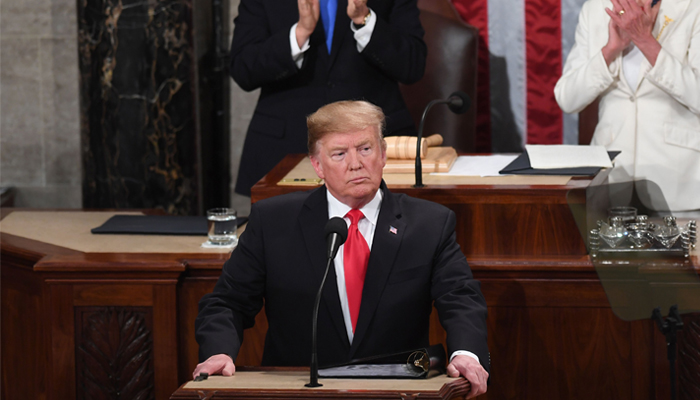 Trump gave the wide-ranging speech a week later than scheduled because of the month-long shutdown.
His Vice President Mike Pence and Democratic leader Nancy Pelosi sat behind him.
Trump said, “We must reject the politics of revenge, resistance and retribution and embrace the boundless potential of cooperation, compromise and the common good.”
But his speech comes at a time when the US is as polarized as ever.
One of the most recent clashes is over a border wall.Trump wants billions for it, but the Democrats argue there are more effective ways to secure the border.
A deadline is looming and if a deal isn’t reached, Trump has threatened another shutdown. So he’s pushing for a deal.
He said, “Simply put, walls work and walls save lives. So let’s work together, compromise, and reach a deal that will truly make America safe.”
Trump touched on a number of situations around the world — from support for the Venezuelan opposition — to his rationale for bringing home US troops from Syria and Afghanistan — to confronting Iran, which Trump called the leading state sponsor of terror.
He also announced details for his next meeting with North Korea’s leader. It will happen on February 27 and 28 in Vietnam.
He said, “If I had not been elected President of the United States, we would right now, in my opinion, be in a major war with North Korea. Much work remains to be done, but my relationship with Kim Jong Un is a good one.”
His meeting with Kim last year ended with a vague pledge to denuclearize the Korean peninsula, but further talks have stalled and questions about whether the country will ever get rid of its weapons remains.
When it came to the trade dispute with China, Trump reiterated his complaints and demands for Beijing.
He said, “We are now working on a new trade deal with China. But it must include real, structural change to end unfair trade practices, reduce our chronic trade deficit and protect American jobs.”
On the domestic front, Trump talked about healthcare, including a promise to end the country’s HIV epidemic in 10 years.
And while pushing for unity, Trump said legislation can’t move ahead if there are “investigations” — a shot at the probe looking into alleged collusion between his campaign and Russia in the 2016 election.
US President Donald Trump said Tuesday that talks with Afghanistan’s Taliban were making headway as he voiced cautious hope for a negotiated end to America´s longest war.
“My administration is holding constructive talks with a number of Afghan groups, including the Taliban,” Trump said in his annual State of the Union address to Congress, weighing “a possible political solution to this long and bloody conflict.”
“We do not know whether we will achieve an agreement — but we do know that after two decades of war, the hour has come to at least try for peace,” he said.
“Great nations do not fight endless wars,” Trump said, after his controversial orders to pull all US troops out of Syria and half of the 14,000-strong force in Afghanistan.
US envoy Zalmay Khalilzad in January held an unusually long six days of negotiations with Taliban representatives in Qatar. While Khalilzad has stressed that much remains to discuss, the broad goal would be for the United States to pull troops from Afghanistan and for the Taliban to ensure that foreign extremists will not be based on its territory — the reason for the US invasion after the September 11, 2001 attacks.
But the Taliban have refused to negotiate with the internationally recognized government in Kabul. Afghan President Ashraf Ghani tweeted ahead of Trump´s speech that he had spoken to Secretary of State Mike Pompeo, who “underscored the central importance of ensuring the centrality of the Afghan government in the peace process.”
Trump’s claims to foreign policy successes are not necessarily endorsed even in his own party.
He repeated in the speech, according to the prepared text, that he wants US troops to pull out from long-running wars, such as Afghanistan and Syria as soon as possible.
“Great nations do not fight endless wars,” he said.
at February 06, 2019 No comments: Links to this post

·        Political parties are required to submit a statement of election expenditure to the Election Commission within 75 days of completion of Assembly Elections.
·        The expenditure statement contains details of the total amount received as funds in the form of cash, cheques and demand drafts and the total amount spent under various heads.
·        The expenditure statement contains information on the amount spent on the following heads at the central, state, district andconstituency levels by the party:
o   Publicity
o   Travel expenses
o   Other expenses
o   Expenditure towards candidates
·        Political parties submit these statements providing information of funds collected and spent between announcement and completion of elections. This period could be between 3 weeks to 3 months based on the notification issued by the Election Commission.
·        This report analyses the funds received and expenditure incurred by recognized political parties, during the state Assembly election to Karnataka, held in the month of May, 2018.
·        6 National Parties and 7 Regional Parties have been considered for analysis in this report.
·        Election expenditure statements of JD(S), SHS, and JD(U) for Karnataka Assembly Election are unavailable on the website of the ECI.

Details provided in the Election Expenditure Statement
Funds Collected and Expenditure incurred by political parties
·        Total funds collected by 8 political parties during Karnataka Assembly Election held in 2018 was Rs 356.04 cr and total expenditure incurred was Rs 170.16 cr.
·        BSP and AIFB had not declared any funds collected at the Central Headquarters and State Units during Karnataka Assembly Election, 2018.
·        Funds collected by the parties at the Central Headquarters was Rs 269.94 cr and expenditure was Rs 112.144 cr. Karnataka State Unitsspent Rs 58.014 cr.

·        The election expenditure statement of JDS is not yet available in the public domain despite contesting in Karnataka Assembly Election 2018 and emerging as the ruling party in the state.
·        AIFB has not mentioned any funds collected and expenditure incurred from it Central Headquarter and State Unit in spite of contesting elections. NCP and AIADMK collected funds from the Central Headquarters and State Units respectively but have not shown any expenditure incurred in their statements.
·        The expenditure statement of CPI does not provide any information about the breakup of general party propaganda expenses incurred by party headquarter.

·        It must be made mandatory for all political parties to submit their statements of expenditure in the format given by the ECI, within the prescribed time limit. Political parties not submitting on time or in the prescribed format should be heavily penalized.
·        The details of all donors who contribute to national and regional parties exclusively for their election campaigns must be declared in the public domain irrespective of the amount donated.
·        A format similar to the donations report along with the date of donations, submitted to the ECI on an annual basis, has to be prescribed for the expenditure statement so as to bring in more transparency in the finances of the political parties especially during elections when it is said that black money plays a major role.
·        Where possible, the expenditure must be limited to transactions via cheque/DD/RTGS so as to reduce the use of black money in elections, as per the transparency guidelines issued by the ECI.
·        Similar to the shadow observers of the ECI for monitoring expenditure of candidates, there must also be observers for monitoring the expenditure of political parties.