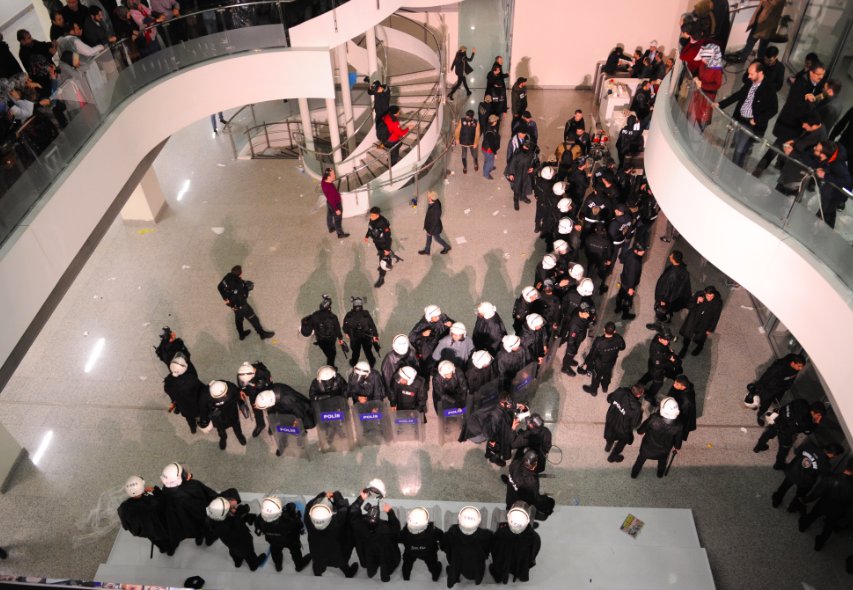 Turkish police use water cannons to disassemble the crowd protesting outside the headquarters of the opposition Zaman newspaper. Turkish police used water cannon and tear gas to disperse crowds protesting outside the headquarters of the opposition Zaman newspaper. They moved in to secure the premises following a government decision to take over the management of the media group. Police officers pushed their way inside the building.“Throw him off the staircase!” one of the officers allegedly shouted, as the raid squad pushed one of the publication’s employees down to the hall, according to a tweet written by a Zaman employee.Zaman Editor-in-Chief Sevgi Akarcesme said that during the raid she was pushed by police as authorities tried to take her out of the building.
“A police officer grabbed my phone forcefully while I was broadcasting on Periscope. I’ll sue him when the rule of law is back. Unbelievable!” she tweeted. “This is beyond comprehension! Such a sad day in Turkey!”
The police had gone to the management floor in the building, and were preventing editors from entering their offices. The journalists were shut out of their offices while police allegedly confiscated their cell phones, according to reports on social media.The raid began shortly before midnight after a day of standoffs between police and opposition protesters furious about what they call a government crackdown on the free press.
Alejandro Alvarez ‎@aletweetsnews
Watch press freedom in Turkey collapse as police raid #Zaman, tear gas just used.The biggest opposition publication is being accused by the state of alleged links to America-based Muslim cleric Fethullah Gulen, whom the government accuses of attempting to topple the regime.
The decision by Istanbul 6th Criminal Court of Peace to de facto censor the publication was granted after the request of the Istanbul Chief Public Prosecutor’s Office, that accused the publication of taking orders from what it called the “Fethullahist Terrorist Organization/Parallel State Structure (FETO/PDY).”
The prosecutor said that the alleged terrorist group is working together with the Kurdistan Workers’ Party (PKK) with the aim of toppling the Turkish government.
Bengaluru: Mar 04, 2016, DHNS:
BBMP officials, members of local bodies can enforce ban

The State Cabinet on Thursday cleared a final notification to ban the manufacture and use of various kinds of plastic items including carry bags, banners, buntings, flags, flexes, plates, thermocol cups, spreading sheets, among others, irrespective of their thickness.
The ban will come into effect once the notification is gazetted. The Cabinet, however, has not fixed a timeframe to gazette the notification, sources said. There was no official briefing after the cabinet meeting as the legislature is in session.
The Forest, Ecology and Environment Department in October 2015, had issued a draft notification to ban manufacture, supply, storage, transportation, sales, distribution and use of nearly a dozen kinds of plastic items. Products made out of thermocol and microbeads are also included in the list. The department had called for objections and suggestions from the public within 30 days.
The department received as many as 1,600 objections and suggestions. According to officials in the department most of the objections were plastic manufacturers and traders associations who felt that the plastic ban was not practical. Moreover, it would hit the livelihood of thousands of persons and their families working in the plastic industry. The traders in their objections had also pointed out that hundreds of them had availed loans to start work in the plastic industry and that they would go bankrupt if the ban is put in place.
The Cabinet, on Thursday, approved the final notification that seeks to impose the ban under Section 5 of the Environment Protection Act. Sources said that no major changes have been made in the final notification.
According to the notification, top administrative officials in the Bruhat Bengaluru Mahanagara Palike, deputy commissioners of districts, health officers, members of local bodies in the State, assistant commissioners, tahsildars in taluks, environmental officers of the Karnataka State Pollution Control Board, officers of the Commercial Taxes Department and Food and Civil Supplies Department will be conferred with the power to enforce the ban.
Legal action would be initiated against those who violate the ban and cases booked in the jurisdictional court of law as per section 19 of the Environment (Protection) Act, 1986.
The Growth Net 2016
Yael Smadja
To
Naresh Sagar
Mar 4 at 11:48 PM
Dear Naresh Sagar,As you may know, the fourth edition of The Growth Net is coming up. The meeting will be held in New Delhi on April 7-9 2016. This year’s meeting will be focusing on “Restoring higher growth in Emerging Markets”, developing the program around 3 orientations we believe will provide key insights for economic and business strategies:
· What are the prospects in China, India, the US and Japan, and how these prospects will impact on the trajectory of most emerging markets countries, and the world economies over the next period?
· What are the key priority issues that all-emerging market countries need to focus on in a pragmatic way to re-boost their growth potential?
· Where are the opportunities for economic growth and new business developments in an emerging markets environment that remains volatile?
We are privileged to have the Indian Ministry of External Affairs as our official Partner as well as the Confederation of Indian Industries (CII). We keep on confirming key speakers and participants from major corporations from India, Japan, the US, China, Switzerland, South Africa, the United Kingdom, Mexico, Turkey, Israel etc. I attach an updated preliminary program and a list of confirmed speakers for your reference.This 4th Growth Net Summit will bring together around 350 participants, 80% of them senior executives from emerging market countries and developed economies, set in an environment designed for productive and thought provoking interaction amongst speakers and participants.
More information is available on our website http://www.thegrowthnet.com as well as online registration.
If you have already registered or declined I apologize for the redundant email and ask you to please disregard.
We are at your disposal should you need any assistance or have any questions.
All best,Yael SmadjaPresidentSmadja & Smadja USA404 East 76th streetNew York, NY 10021
Tel. +1 212 759 6000 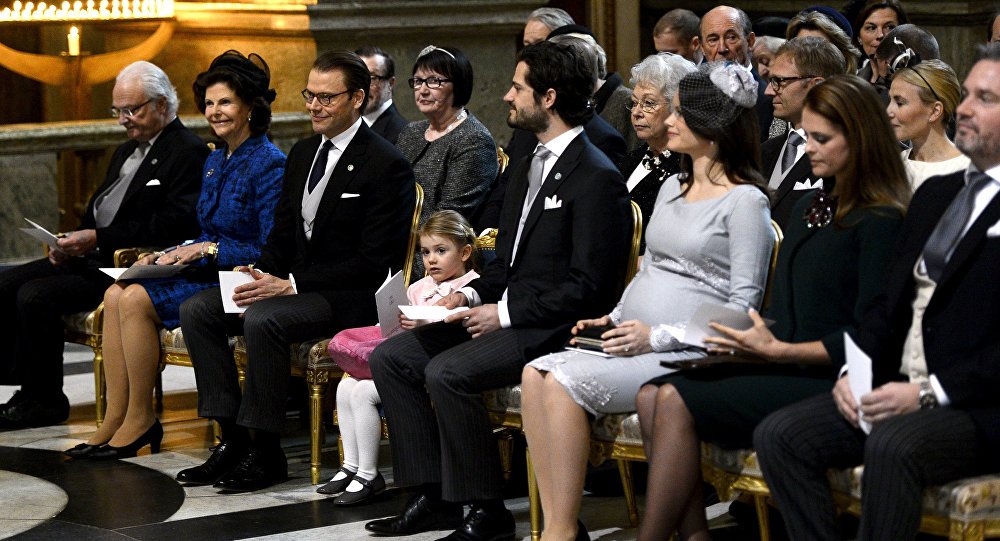 United Nations Office on Genocide Prevention and the Responsibility to Protect: Forum on the Role of Religious Leaders in Preventing Incitement to Violence
4 March 2016
Working together over two days in Washington, DC, religious leaders and representatives of faith based organisations from the Americas developed an important regional strategy to prevent and counter incitement to discrimination, hostility and violence in the region.  The meeting, on 29 February and 1 March, was convened by the United Nations Office on Genocide Prevention and the Responsibility to Protect in partnership with the Network for Religious and Traditional Peacemakers, the United States Institute of Peace and the World Council of Churches.
Recent years have seen a significant escalation in tensions among and against groups of different religions or beliefs, which has often resulted in violence. Incidents of violence have been preceded or accompanied by hate speech and incitement, including in public discourse and the social media.  The meeting in Washington was the third in a series of regional meetings aimed at developing strategies to implement the global plan of action for the prevention of incitement developed by religious leaders from around the world in Fez, Morocco, on 23-24 April 2015.
Adama Dieng, United Nation Special Adviser on the Prevention of Genocide, noted that “Religious leaders from across the Americas are already taking courageous action to prevent and respond to all forms of racism and incitement to violence based on identity. They must be supported nationally, regionally and internationally.”
The regional strategy developed in Washington included recommendations to map existing initiatives; monitor and publicise acts of hatred and incitement that could lead to violence; develop alternative messages in response to hate speech and hate crimes; build robust multi-faith social action and strategic communication campaigns and develop specific educational tools to promote the values of diversity and respond to incitement to violence.
Specific to the Central and South American context, religious actors highlighted the importance of historical memory and truth seeking processes; promoting debates on gender equality within religious institutions; the prevention of gender-based and domestic violence; creating a Central American network aimed at tackling youth violence associated with criminal activity and enhancing the protection of religious leaders who are courageously working to prevent and counter hatred and radicalization.
For more information, images or interview opportunities please contact:Simona Cruciani: Cruciani@un.org, +1-917-367-5430
From 2015 onwards, detailed information about allegations of sexual exploitation and abuse is provided in the annual Report of the Secretary-General on Special measures for protection from sexual exploitation and abuse. This section of the website provides updates to the information provided in this report, as it is received.
Information about new allegations is also provided in this section of the website as it is received and assessed by the Heads of Missions, by DFS/DPKO and/or by the Office of Internal Oversight Services (OIOS). Incidents of possible misconduct can be reported to Conduct and Discipline Teams in field missions, OIOS or other entities. Reconciliation of information received by the various entities takes place. This is a continuous process that aims to confirm whether information received refers to new allegations. An assessment of the information received is then made. Updates to this section of the website will be made once reconciliation and assessment of information has been completed.
Due to space limitations, the table on the website includes only a basic view of the information available. A full view of the information is available in PDF format. If you apply filters before opening the table in PDF view, only the filtered information will be displayed in the PDF.
For the total number of allegations recorded, please refer to the statistics section on “Allegations for All Categories of Personnel per Year (Sexual Exploitation and Abuse)”.
For further guidance on how to read the information contained in the table, click here.
Note: In cases marked with ** in the Results column, personnel from more than one nationality are involved. Currently, such cases appear on more than one row, with a row for each nationality, although the matter still refers to one case. Changes to the display method, to be implemented in April 2016, will move the information into one row reflecting all nationalities involved.
at March 05, 2016 No comments: Links to this post