Saina Nehwal ‏@NSaina  4m4 minutes ago
My shirt! I want to thank sponsors for supporting me first of all SAHARA and NECC and my kitting sponsor YONEX 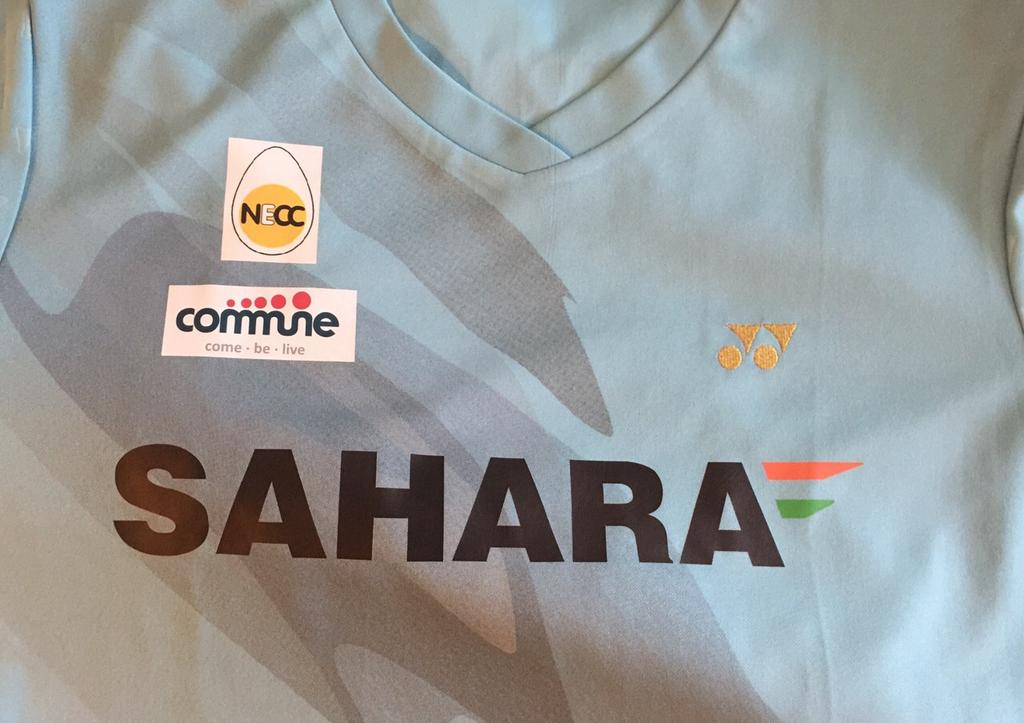 Framework for Security Cooperation between India and Australia

The Prime Minister of India and the Prime Minister of Australia reaffirm that the Strategic Partnership between India and Australia is based on converging political, economic and strategic interests; a shared desire to promote regional and global peace, security and prosperity; and a commitment to democracy, freedom, human rights, and the rule of law.
They have decided to establish a Framework for Security Cooperation to reflect the deepening and expanding security and defence engagement between India and Australia, and to intensify cooperation and consultation between Australia and India in areas of mutual interest. The Framework will be implemented in accordance with the Action Plan below:
Action Plan
1. Annual Summit and Foreign Policy Exchanges and Coordination
a. Annual meeting of Prime Ministers, including in the margins of multilateral meetings
b. Foreign Ministers’ Framework Dialogue
c. Senior Officials’ Talks led by India’s Secretary (East) in the Ministry of External Affairs and the Secretary of Australia’s Department of Foreign Affairs and Trade
d. East Asia Talks between External/Foreign Affairs senior officials
e. 1.5 Track Australia-India Dialogue
2. Defence policy planning and coordination
a. Regular Defence Ministers’ Meeting
b. Annual Defence Policy Talks
c. Annual 1.5 Track Defence Strategic Dialogue
d. Service to service engagement including regular high-level visits, annual staff talks, joint training and regular exercises as agreed
e. Regular bilateral maritime exercises
f. Explore defence research and development cooperation, including through visits by Australian and Indian defence material delegations and efforts to foster joint industry links
3. Counter-terrorism and other Transnational Crimes
a. Annual Joint Working Group on Counter Terrorism and other Transnational Crimes
b. Cooperation in CT training and exchanges between experts on countering improvised explosive devices, bomb incidents and technologies
c. Exchanges on counter-radicalisation
d. Cooperation between police on investigation of transnational crime
e. Cooperation on extradition and mutual legal assistance requests
f. Cooperation between AUSTRAC and Financial Intelligence Unit-India
g. Exchanges on cyber policy and cooperation between CERT India and CERT Australia
h. Cooperation on combating illegal migration
4. Border Protection, Coast Guard, and Customs
a. Annual meetings of the Joint Working Group on Visas, Passports and Consular Matters
b. Exchanges and cooperation between the Indian Coast Guard and Australian border protection authorities
c. Cooperation between Customs authorities, including training
5. Disarmament, Non-proliferation, Civil Nuclear Energy and Maritime Security
a. Annual bilateral dialogue on Disarmament, Non-Proliferation and International Security, including maritime security
b. Australian support for Indian membership of the export control regimes
c. Early operationalization of civil nuclear energy cooperation and Australia’s support for strengthening India’s energy security by supply of uranium for India’s safeguarded nuclear reactors
d. Cooperation between agencies engaged on international search and rescue, including through information exchange and regional dialogue
e. Cooperation on these issues in relevant international fora, including the Expanded ASEAN Maritime Forum
6. Disaster management and peacekeeping
a. Exchange on approaches to humanitarian assistance and disaster relief
b. Collaboration in the East Asia Summit on disaster management
c. Cooperation and exchanges on peacekeeping issues, including between peacekeeping institutions
7. Cooperation in Regional and Multilateral Fora
a. Close cooperation in regional and multilateral fora, including the East Asia Summit, ASEAN Regional Forum, ASEAN Defence Ministers’ Meeting Plus, the Indian Ocean Rim Association, Indian Ocean Naval Symposium, the UN and its specialised agencies, and the G20
b. Support for India’s bid to be a permanent member of the United Nations Security Council
Implementation
Progress under the Action Plan will be reviewed through established institutional arrangements, including the Foreign Ministers’ Framework Dialogue and the Defence Ministers’ Meeting.
at November 18, 2014 No comments:

We have an excellent line-up of speakers for this conference and are expecting the participation from the following industry stalwarts:

Said Mr. Eliasson: “We know that political will at the highest level is critical to address these challenges. However, we also know that success at ending open defecation goes beyond infrastructure.  It requires the understanding of behaviors, cultural attitudes and social norms.”

“Throughout all life stages, women and girls bear the greatest burdens caused by the lack of toilet access. Girls are more likely to drop out of school if they don’t have access to a safe and clean toilet. Women and girls can also risk harassment and sexual abuse when trying to use public toilets or when trying to find somewhere to defecate in the open. Universal access to sanitation has a clear role to play in defending women’s safety, dignity and equality,” said Mr. Eliasson.

Said Chris Williams, Executive Director of the Water Supply and Sanitation Collaborative Council, a global membership organization hosted by the United Nations: “The active support and efforts of leaders of religion, education and public opinion are needed as much as that of elected and other government officials. We call on all leaders of societies and cultures where open defecation habits are still tolerated: Help us end the taboos associated with frank talk about the dangers of the practice and the benefits of proper sanitation and hygiene.”

“A generation ago, the idea of smoke-free restaurants, theatres, airports, banks and other public places seemed improbable.  Attitudes were changed by the concerted focus of political leaders, health officials and advocates, and today the notion of sharing such spaces with smokers has become almost universally foreign. It is beyond time for all of humanity to have access to adequate toilets and to use them.”

Breaking the taboo on a major health problem

The practice of open defecation is deeply rooted in poverty but has also been related to convention and customs in some countries and societies — representing, for example, some of the only times other than worship when women from rigid family circumstances may meet.

In sub-Saharan Africa, where 25% of the population practices open defecation, diarrhea is the third biggest killer of children under five years old.

Studies estimate that a child dies every 2.5 minutes because of unsafe drinking water, poor sanitation and hygiene.  Children with diarrhea eat less and are less able to absorb the nutrients from their food, which makes them even more susceptible to bacteria-related illnesses.  Compounding the problem: the children most vulnerable to acute diarrhea also lack access to potentially life-saving health services.

The recent Ebola outbreak, meanwhile, shone a public spotlight on the open defecation issue in West Africa where worried health officials in Lagos and Nigeria, citing human waste as a vector of the virus, appealed through the media for citizens practicing open defecation to stop.

In Liberia, the nation most affected by Ebola, roughly half the nation’s 4.2 million citizens don’t use toilets; in rural Sierra Leone, the second worst-hit country, the estimate is 28%.

WHO and UNICEF have issued joint guidance on WASH and Ebola (http://bit.ly/1E5vyYn), including the need for separate toilets for use by patients and health care workers in Ebola clinics.

Recent estimates from the WHO and UNICEF Joint Monitoring Programme indicate open defecation was almost halved in developing regions between 1990 and 2012, down from 31% to 17% of those populations.

About 825 million people — 82% of the 1 billion practicing open defecation — reside in just 10 countries:

In the rest of the world, the number of people practicing open defecation is estimated at 182 million.

Published today by WHO on behalf of UN-Water, the Global Analysis and Assessment of Sanitation and Drinking-Water (GLAAS) report says “countries are unable to confirm whether funding is directed towards actual needs or to report back on whether they have met financial allocation targets.”

“More importantly, data often does not inform decision-making: less than half of countries use data in the allocation of resources to sanitation. Existing plans for reaching disadvantaged groups are commonly left unmonitored. Less than half of low and middle income countries track progress in extending sanitation services to the poor.”

The vast majority of those without improved sanitation are impoverished rural residents. And, according to the report, where rural sanitation progress has occurred, it has primarily benefitted richer people, increasing inequalities.

“Political commitments to ensure everyone has access to water and sanitation are essential to human health and are at an all-time high,” said Dr. Maria Neira, Director of the WHO Department of Public Health and the Environment. “International aid for the sector is on the rise. But we continue to see major financial gaps at the country level, particularly in rural areas.”

GLAAS data show sanitation expenditure as a proportion of overall WASH expenditure growing from 20% in 2010 to 40% in 2014. Aid commitments for sanitation, however, fell to one-fourth of water and sanitation in ODA in 2012, compared to one-third in 2010.

“Despite considerable health benefits to be had through hygiene promotion … hygiene remains a neglected component of WASH,” says the report.

Open defecation is declining steadily in Asia, and in Latin America and the Caribbean.

Countries are taking action and the Sanitation and Water for All partnership has created an overview of national commitments: http://sanitationandwaterforall.org/commitments/country-commitments.

For example, India Prime Minister Narendra Modi has pledged 111 million toilets and an end to open defecation by 2019, an ambition channelling the view of the nation’s late spiritual leader Mahatma Gandhi, who termed sanitation “more important than independence.”

Nigeria has set a target date of 2018 for the end of open defecation, while Burundi is evaluating a framework for eliminating the practice by the end of 2016.

Meanwhile, from 1990 to 2012, open defecation in Ethiopia fell by 55 percentage points, from 92% to 37%.  According to the GLAAS report launched today, key elements of Ethiopia’s success include:

* Strong political will for improving access to water and sanitation. According to the Ministry of Health: “The government has shown demonstrable, high level political commitment to enhanced sanitation coverage over the past few years. This goal is reflected in the national Health Extension Program, the National Hygiene and Sanitation Strategy and a national step-by-step protocol and Sanitation Action Plan (SAP) for achieving universal access by 2015. There has been significant improvement in access to safe sanitation and hygiene in Ethiopia since the Health Extension Program began in 2002/2003.”

* Human resources and education. Health Extension Workers educate communities about sanitation and help create cultural acceptance of toilets.  The nation’s 39,000 HEWs are trained at nine Training Vocational and Educational Centres and the government has upgraded the degree levels for sanitation and hygiene to improve qualifications.

Governments that have invested in behavior change programmes, rather than just in constructing of toilets have seen the most positive results.

Community approaches such as Community Led Total Sanitation, for example, offer an innovative approach to eliminate open defecation. This approach focuses on the behavioural change needed to ensure real and sustainable improvements and the creation of open defecation-free villages, since even a minority practicing open defecation puts a whole village at greater risk of disease. Through the use of simple and effective demonstrations which explain the link between open defecation and disease, families make the decision to change their sanitation practices and the community as a whole comes together to decide on what steps need to be taken to achieve an open defecation free environment.

UN Call to Action on Sanitation:
https://www.youtube.com/watch?v=pDUCr-V9NE8
at November 18, 2014 No comments:

IndiaOz agree on closer cooperation on security and trade

Transparency Watchdogs of India- too transparent to make their asset detail