AUDIENCE MESMERISED BY PLAYS MANASA MANGAL & TUMHARA VINCENT STAGED TODAY DURING NATIONAL SCHOOL OF DRAMA’S 19th BHARAT RANG MAHOTSAV
New Delhi, 11th February, 2017: Today during the Master Class of 19th edition of Bharat Rang Mahotsav, he gave five very important tips to aspirants who want to polish their writing skills, “Firstly, Love the language in which you are writing; Secondly, Write something that you know about; Thirdly, Characterize your characters based on the real people; Fourthly, All forms of creativity come as a born gift and one must work hard to discover it; and lastly, Find a good editor as it is true bliss.”
Kiran Doshi who was invited to National School of Drama today has won The Hindu Prize 2016 for his third work of fiction, Jinnah Often Came to our House. It is a brilliant saga of love and betrayal, pain and redemption, set amidst the long struggle for freedom and its terrible twin, the call for Pakistan. In it, we confront questions that are as relevant today as they were a hundred years ago. Kiran Doshi studied history, politics and law in Bombay before joining the Indian Foreign Service in 1962. It was a career which, not infrequently, saw him tackling relations with Pakistan, always an important, exciting but ultimately frustrating task. He is also the author of Birds of Passage, a “greatly engrossing and hilarious novel set in the world of India-Pakistan-USA diplomacy, and Diplomatic Tales, short stories written in comic verse.
Today during the 19th edition of Bharat Rang Mahotsav, 5 plays were performed including Prokash Bhattacharya’s play in Bengali Manasa Mangal, Tapan Bhaatt’s Hindi play Rajputana, N Amusana Devi’s play in Manipuri Holi, Rangakalpa Group of Hyderabad’s Hindi play Tumhara Vincent directed by Satyabrata Rout and NSD Repertory’s Ghasiram Kotwal directed by Rajinder Nath. Apart from this today in Ambience Performance, Dandiya, Haryanvi Phag and Lavani was performed in the NSD campus today.
Today, during the Meet the Director – face to face at National School of Drama, renowned theatre personality, Guru Gourang Barik, Director of Moghul Tamasha explained about the motive behind the play “Moghul Tamasha is a dying art form, almost extinct. We are trying to save with whatever resources we have at our disposal and we want to spread a message of communal harmony in the country through the theme of this play and at the same time keeping it entertaining by giving it a modern touch of music.” Sanjay Upadhyay, Director of Anand Raghunandan commented on the decision to present the play in Bagheli “this play was first written in Hindi in around 18th century but we decided to enact it in Bagheli because at the time when our friend introduced me to the play me and my team were in Baghelkhand for a study tour. It was quite a difficult task for the actors to get used to the language but we all worked hard on our lingual skills and it finally paid off.” Bijyendra Kumar Tank, Director of Gunda on how did he came up with the name of the play said “I was discussing the names for the play with my seniors and the name Gunda came up and it appealed to me instantly because in our society the people who oppose the establishment are labeled as Gundas, which perfectly fits the story.”

New Delhi, Feb 12: Raju Vasudev Haldankar, a Goan footballer, who had never taken flown in an airplane in his life, will now have a chance to take a dream flight to the United States. It could be a life-changing shift from conventional football to the National Football League, an American rage where stardom and big money rules.
The 22-year-old, who came to Sesa Football Academy and played for Salgaocar, now turns out for a club in Calangute, where football is a way of life. He emerged as the big winner in the National Finals of the “Million Dollar Kick” Season 1, and will now proceed to the US for training and hopefully a career in NFL as a kicker.

The Grand Finals of the “Million Dollar Kick India – Season 1” was the culmination of City Try Outs in Delhi, Goa, Ahmedabad, Kolkata, Shillong, Dehradun and Lucknow.
Apart from a trip to US for training and a chance to make the big league, Haldankar also received a prize of US $ 5,000 (equivalent of just over Rs. 3.3 lakhs) besides gifts from Oakley eyewear and Jio phones.

Haldankar won the National Finals at the Siri Fort Sports Complex, where it all began a month ago, with a neat 55-yard kick. The first and second runner-up were Dylan D’Costa, who was earlier a wildcard from South Goa Try Out, and Gnanendrasinh Jhala, winner of the Ahmedabad Try Out.
Representing a diverse background, Haldankar is a regular footballer with a local club; Gnanendrasinh Jhala, 30, works at the AG Office in Rajkot and Dylan D’Costa is a 17-year-old student in Goa and keen football player.

Apart from the three winners, the organisers of the “MDK – Season 1” in India, also picked three other ‘potential stars’. They are another Goan, Elton Godinho, also a ‘wildcard’ in Goa Try Outs, Gorakhpur’s Mukesh Singh, winner of Lucknow Try Out, and the phenomenally talented Arshad Khan, a Lucknow goalkeeper, who won the first Try Out in Delhi.
So, the selected six include three from Goa and one each from Gorakhpur, Ahmedabad and Lucknow.

Interestingly, Haldankar, who came for the Goa Try Outs for MDK at the advice of football star, Climax Lawrence, was one of the two ‘wildcards’ whom the organisers saw as a big potential and talent.
“The response we received for the inaugural season of the MDK India was phenomenal. In each of the City Try Outs, the enthusiasm for this new sport was amazing and after a long journey through various cities of India, we have six kickers, all of whom are winners in a way. Not just that, even the talent we got to see was awesome. It re-affirms our belief that this sport does have a great future in India, where football is already a big passion,” said Neeraj Sareen, Managing Director of Sportsmantra, the owners and founders of the series.

“I am delighted with this “Million Dollar Kick“ event and quite clearly ‘The Million Dollar Arm’ which put two Indians in limelight was something we had in mind. These ‘kickers’ could now discover a new sporting life for themselves as the NFL dream could become a reality.”

The arrival of American football into places like Dehradun, Shillong, Goa, Guwahati and Lucknow apart from bigger cities shows how bright the future is for the future series and the game, added Sareen, whose vision it was to bring “Million Dollar Kick” to India.

Haldankar said, “It’s a great feeling when you win something big, I am very happy to have won the Million Dollar Kick. It gives me a chance to represent my nation at the biggest stage in the world. Even though I won, I have massive respect for my fellow participants as they are among India’s best kickers.”
The winners also received Oakley eyewear and Reliance Jio phones were given out to the Top 10.

For More information on “The Million Dollar Kick”
Details of MDK can be found on social media sites – the ‘milliondollarkick’ Facebook page and @MDKhunt on Twitter, milliondollarkickind on Instagram.
Or send email to kickformilliondollar@gmail.com
Or send a What’sapp text on +919999333413.
Contact point:
Pankaj +919999333413

Shared bySagar Media Inc
www.khaleejtimes.com – As many as 4,000 delegates and 150 speakers representing 139 countries will attend the fifth edition of the World Government Summit which begins today. The biggest highlight of the opening day of t… 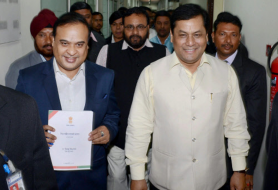 timesofindia.indiatimes.com – Himanta Biswa Sarma , who joined BJP just before the Assam election in 2016, was appointed convener of North-East Democratic Alliance (NEDA) soon after the party’s victory. In charge of finance, he…

Talk on ‘Superpower in Search of a Strategy: US Collaboration with China and India in the Globalisation of Innovation’

Shared bySagar Media Inc
us9.campaign-archive2.com – The globalisation of innovation is not only transforming a vital human endeavour but also creating a new form of interdependence between the United States, China, and India. This seminar explores t…