by newdelhisamachara in Uncategorized Edit
Mourners are gathering to pay their respects to Boris Nemtsov at the Sakharov Center in Moscow. One of Russia’s prominent opposition figures was shot dead by unidentified gunman in the capital on Friday, February 28.
The main eyewitness in the murder case of the Russian politician Boris Nemtsov, Anna Duritskaya, is now back in Ukraine, her lawyer has announced. Earlier on Monday the Ukrainian foreign ministry said that Duritskaya left for her native Ukraine, accompanied by her lawyer. The Ukrainian girlfriend of Nemtsov was questioned by the investigation before being allowed to return home. The 23-year-old was walking with Nemtsov on Friday night when a gunman shot the politician four times about 100 meters from the Kremlin.
One who unveil mystery get Reward for 3 Million Rouble .
Media agencies
at March 03, 2015 No comments:

German Chancellor Angela Merkel has invited the leaders of ‘Normandy Four’ to Berlin in March to discuss the situation in Ukraine, Bloomberg reported. The phone conversation took place between Merkel, and the presidents of France, Ukraine and Russia, Francois Hollande, Petro Poroshenko and Vladimir Putin respectively. The leaders noted on the progress in resolving the crisis in Ukraine. The meeting is set to take place on March 6.

by newdelhisamachara in Uncategorized Edit
Britain’s Prince William presented China’s President Xi Jinping with an envelope on Monday containing an invitation from the queen to visit Britain this year, AP said. The prince began the first official visit to mainland China by a senior British royal in a generation. He will visit Beijing, Shanghai and in the southwest near the border with Myanmar.

by newdelhisamachara in Uncategorized Edit
More than 30 people were arrested after a group of about 400 demonstrators in Hong Kong clashed with police. Protesters in Yuen Long, in Hong Kong’s New Territories, chanted to “cancel the multiple-entry permit” and “topple the Chinese Communist Party,” Reuters said. The demonstrators complained about so-called parallel traders, who buy goods in Hong Kong to sell at a profit across the border. A total of 36 people had been arrested for offences including possessing offensive weapons, assault, disorder, and fighting.

Yogendra Yadav: Why is Indian Express selective in its moral judgement?

Yogendra Yadav ‏@AapYogendra
Why is Indian Express selective in its moral judgement? My take on the journalist’s sting issue: 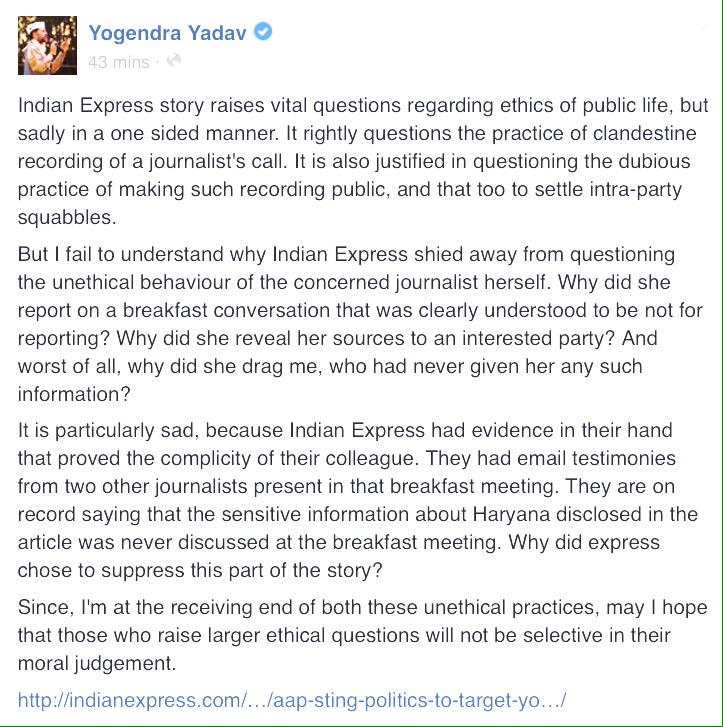 Jairam Ramesh was tried in scores of Ministries and every time he disappointed people of India – was Dullard Grade, S&T, Industry, Power, Environment, Rural Development, and Commerce etc. People who hold Constitutional Positions MUST BE THE BEST But He Failed Everywhere.

S&T: - He failed to Vitalize Patent Office, when Protecting IPR is key to progress of India – CSIR filed Bogus Patents wasted $10b every year.

Environment: - He failed to Clear Files even for Critical Projects and worst of allStalled GM Crop Induction even after resounding success of Bt Cotton. Coal Based Thermal Power was largely promoted neglecting Multi-Purpose Hydro Power. Even atGlobal Climate Change Events insisted on Expansion of Coal Based Power than lowering Carbon Intensity of Indian Economy.
Rural Development: - He wasted public money on Useless Schemes than Creating Permanent Infrastructure Like Canals and Irrigation and Homes. He promoted most Lunatic PURA Loot Program wasting Rs.25 crores in already developed villages. He didn’t demand 50% of National Budget for Rural India home to 70% population. Worst of All Failed to EMPHASIZE Storage, Processing and Marketing of Foods by Farmers that could potentially Triple or Quadruple Rural Income create over 100m new jobs.
Commerce: - He failed Check Low Value Added Exports like Iron Ore or Wheat & Rice than Engineering Goods and Breads and Biscuits.
Last evening he gave another excuse for Congress Party’s repeat failures in elections all over India – ‘Congress is a Coalition of Interests’ & ‘Within Congress there are Interests who Favor BJP Like Policies or BJP Capitalism’.
He didn’t accept responsibility for even one Failure though was All Round Disaster.
He was IRRESPONSIBLE as Minister and was Non Serious at repeated losses of INC.
He led bunch of Dullards in Congress who let India down.
Ravinder Singh, Inventor & Consultant, INNOVATIVE TECHNOLOGIES AND PROJECTS

Punjab to be number one in organic farming; Prakash Singh Badal

Chandigarh, 2nd March: Punjab Chief Minister Prakash Singh Badal today likened organic farming to ‘saving the nation’ and said Punjab would be number one in organic farming in the country. “We were number one in feeding the country, and we will make Punjab number one in organic farming in India,” said the CM to thundering applause while speaking at the closing ceremony of the three-day 5th National Organic Farming Convention here.
“You people,” said Badal, addressing hundreds of organic farmers in a packed auditorium, “are the heroes of this new struggle to save the nation. I have witnessed the freedom struggle myself and the zeal and commitment this takes.”
The Chief Minister referred to Punjab’s disastrous experience with chemical-intensive farming following the Green Revolution, and spoke about how his state had sacrificed everything it had in the process. “In our state, we consider the air as our guru, water our father and earth as our mother. And we have sacrificed all three for the sake of feeding the country at one point,” he said.
“Now, other states have become self-reliant, and it is time we made a move towards organic farming,” he said, emphasising his conviction that organic was the way ahead. “The disastrous impact of chemical-intensive farming on people’s health alone is reason enough for making the shift,” he noted.
Praising the span and depth of discussions at the convention, he said such gatherings must be organised in every village across the state. “Farmers must be convinced that organic farming offers as much income and profit as chemical-intensive agriculture. Every village must have a demo plot that can provide farmers with proof of this. We will facilitate such plots through the local panchayats,” he said.
Underlining the need for proper marketing in enabling fair prices for organic produce, Badal said his government would work towards providing organic farmers with shops in urban areas.
The CM promised all possible assistance to popularise organic farming, and declared that he would meet a smaller group (from among the organisers of the convention) in the near future to discuss the best way forward. “I will also direct my office to create a board comprising representatives of organic farmers and experts who will advise the government on policies,” he said, bringing to a close the proceedings of the three-day fifth National Organic Farming Convention organised by the Organic Farming Association of India (OFAI), the National Institute of Technical Teachers’ Training (NITTTR), the Alliance for Sustainable & Holistic Agriculture (ASHA) and the Kheti Virasat Mission (KVM).
More than 2,500 delegates comprising practicing farmers, seed savers, ecologists, scientists, policy makers, non-governmental and community organizations from 22 states participated in the convention, apart from participants from various foreign countries.
Speaking before the Chief Minister at the closing ceremony, Umendra Dutt, Executive Director, Kheti Virasat Mission stated that convention was organised in the region seeing the critical situation of farming and farmers in Punjab and Haryana. “The convention has proved that Punjab and Haryana have the potential to reverse the destruction of land, water and biodiversity brought about through intensive farming with large doses of agro-chemicals and mindless irrigation, and become beacons in ecological farming” said Dutt.
Dr Claude Alvares, founder Director of OFAI, said, “Sessions on science and experience over the past three days show that organic farming is the best way forward to sustain agriculture in our country while producing enough food, fibre and fodder for all. This convention has shown the world the best knowledge and capabilities that India has on this front. Organic farming is the need of the hour and this is more so in the case of Northern states.”
Kavitha Kuruganti, convenor ASHA, while presenting the summary of the three days of the convention reiterated that organic farming is “not an alternative but the only path through which food, farming and freedom can be sustained in our country”.
The convention included scientific and technical sessions at the NITTTR, apart from a Nature Festival that included a Kisan Haat or Farmers’ Market; Urban Organic Gardening workshops for Chandigarh citizens; an organic food festival featuring authentic organic cuisine from 10 different states of India; a Kisan Panchayat to create a dialogue space between urban consumers and farmers; and a biodiversity festival featuring thousands of heirloom seed varieties and cultural programmes.
The Scientific Conference held as part of the Convention, organised by Society of Agro-Ecology, India and Centre for Sustainable Agriculture saw scientists from premiere research institutions and organisations working with farmers as well as farmer-scientists share their latest research and observations on soil health, plant nutrition, plant protection, water management, and Iivestock development with special focus on the indigenous breeds of cattle.
NITTTR played a crucial role in taking the sessions to an audience outside those attending the convention. “We did a live webcast of some of the important sessions in the convention, apart from organising interactive sessions though ICT so as to reach farmers in remote corners of the country,” said Dr M P Poonia, Director, NITTTR.
The final declaration from the convention pledged to work towards mainstreaming ecological farming in the country. “We reiterate our conviction that agro-ecological farming practices are the only way forward for meeting the nutritional, livelihood, socio-cultural and spiritual needs of our people, including those of future generations. This conviction is strengthened by the experiences of our farmer friends in Punjab and Haryana who have paid a high price and sacrificed their environment and the health of their people. We pledge to stand by them in their journey to recovery and restoration,” said the declaration.
For more information, contact:
Umendra Dutt, Executive Director, KVM: 09872682161 (mob)
Kavitha Kuruganti, Convenor, ASHA: 09393001550 (mob)
Kapil Shah, Secretary, OFAI: 09427054132 (mob)
at March 03, 2015 No comments: