Consequent upon detailed investigation by DG-CCI, the Commission had arrived at the conclusion that exclusive arrangements between two undertakings do not accrue any benefit to the consumer and are rather at the cost of consumer. Such an agreement has anti-competitive effect in any market. CCI also considered it as an abuse of dominance by Hiranandani Hospital and the conditions put up on its patients that in case one had to avail stem cell banking system, they will only have to avail services of Cryobank, as abusive and violative of Section 4 of the Competition Act. CCI, under Section 27 of the Act, has passed the following order:-

(b) The OP hospital shall not enter into a similar agreement with any stem cell bank in future.”

These directions have to be complied with immediate effect.

The Commission has also imposed a penalty of Rs. 3,81,58,303/- calculated at the rate of 4% of the average turnover of OP hospital. The penalty is to be deposited within 60 days of receipt of the order.
at February 21, 2014 No comments: Links to this post

The six major world powers - US, UK, France, Russia, China plus Germany have agreed on a framework for talks leading to a comprehensive nuclear deal. The lead negotiator for the P5+1 group and the EU foreign policy chief Catherine Ashton said the two sides have agreed a timetable and framework agreement. The two sides will meet on a monthly basis at the level of Iranian foreign minister and Catherine Ashton till June. The next meeting will be held in Vienna on March 17 after a meeting of technical experts in early March. At a press conference in Vienna she said that they have identified all the issues that need to be addressed to reach a comprehensive and final agreement.

Iran and P5+1 Group of nations were engaged in talks in Vienna over the past three days on a joint action plan leading to a comprehensive deal over Iran’s controversial nuclear program. The Joint Plan of Action was signed by Iran and P5+1 group of nations in Geneva last November. It provides for scaling down of parts of Iranian nuclear program in exchange for partial easing of sanctions over a period of six months. The six month time frame is to be used to arrive at a comprehensive deal. The interim nuclear deal came into effect on January 20.
at February 21, 2014 No comments: Links to this post

Email ThisBlogThis!Share to TwitterShare to FacebookShare to Pinterest
Retweeted by GPP

Kiran Kumar S ‏@KiranKS Feb 18
#LiarKejriwal is not just a sick liar, but a dangerous criminal also, per the cases he has declared on his affidavit. pic.twitter.com/C0rpMScdE3 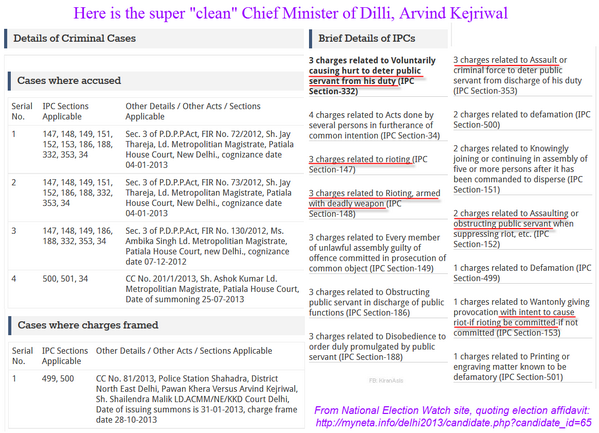 Andhra Pradesh Reorganisation Bill has been passed by Parliament with Rajya Sabha, approving it by voice vote. The Lok Sabha had passed it on Tuesday. CPM staged a walk-out in the Rajya Sabha as its demand for voting was not accepted. The main opposition BJP said though it was not fully satisfied with the provisions of the Bill, it is extending support to it in the interests of people of Telangana. All the amendments moved by the opposition parties including BJP were negated. However, TMC members who were against the Bill, did not press for their amendments.

Intervening in the discussion the Prime Minister Dr Manmohan Singh announced to grant special Category Status to 13 districts of
Seemandhra for a period of five years to put the state’s finances on a
firmer footing. He assured the House that the Centre will execute the
Polavaram multi purpose project and will make any further amendments if needed for Rehabilitation and Resettlement under the project. The Prime Minister said the resource gap that may arise in Seemandhra after state division in the first year will be compensated in the Regular Union Budget for 2014-15.
at February 21, 2014 No comments: Links to this post

Zee Cine Awards, the WorldⳠBiggest ViewerⳠChoice Awards, has set new benchmarks every year and established itself as a preferred platform for the filmmakers to promote their upcoming films. Owing to the sheer magnitude of its reach and popularity, the stage of Lux Cozi Zee Cine Awards 2014 powered by Dabur Vatika Enriched Olive Hair Oil and Karbonn Mobile witnessed the spectacular first look launch of two of the biggest upcoming Bollywood movies- Ashay Kumar starrer- Holiday & Ali Zafar and Yami Gautam starrer- Total Siyapaa


Total Siyapaa⠷as set to release few days before the award show. The upcoming film ᔯtal Siyapaa⠥xtended its release date to leverage the grand and prestigious stage of Lux Cozi Zee Cine Awards 2014 to launch its ᦩrst-look⮼ The movie is now all set to release on 7th March.  Ali Zafar, the lead actor who is based in Pakistan, flew in especially to attend the awards function. The lead actors enthralled the audience with their stupendous act considered as one of the best romantic performances to look forward to at the Awards.
Catch the most stunning spectacle of entertainment as the world biggest viewers choice awards Lux Cozi Zee Cine Awards 2014 powered by Dabur Vatika Enriched Olive Hair Oil and Karbonn Mobile airs at 8 PM on 23rd February on Zee TV, Zee Anmol and Zee Tamizh.
at February 21, 2014 No comments: Links to this post