New Delhi, 31st March 2015: Daikin air-conditioning India Pvt Ltd, a 100% subsidiary of Daikin Industries Ltd., Japan and a global leader in the manufacturing of commercial-use and residential air conditioning systems announced its team sponsorship with Delhi Daredevils.
Daikin considers India as one of the most prominent markets for their range of products. The association with Delhi Daredevils, one of the most watched teams in India, provides a bigger platform to reinforce its dominance as the fastest growing AC brand in India.
Mr. Kanwaljeet Jawa, Managing Director, Daikin India said “Cricket is a religion in India. And Delhi Daredevils is the most promising team of the league, Daikin’s decision to associate aims at fuelling the resurgent interest in the sport amongst youngsters.” He further added, “The partnership and the journey ahead will indeed be a privileged one for the entire Daikin family. It is the first big step for us to connect with our current and prospective consumers through this sport on a national stage.”
Acknowledging Daikin’s sponsorship deal with the team, Mr. Hemant Dua, CEO, Delhi Daredevils said “We thank Daikin for joining us and being a part of the journey to be associated with the talented mix of players. This association will further boost the game and help the sport reach new levels. We are delighted to have Daikin on board as part of the Delhi Daredevils family.”
About Daikin Air conditioning India Pvt. Ltd.:
Daikin Airconditioning India Pvt. Ltd.( DAIPL) is a 100% subsidiary of Daikin Industries Ltd., Japan, a global leader in the manufacturing of commercial-use and residential air conditioning systems. Backed by the superior technology, the organization offers a wide range of energy efficient air conditioning solutions to the Indian customers. It has been successfully offering premium air conditioning solutions in the Indian market for large-scale projects. Robust growth is forecasted in India’s air-conditioning market in the future and Daikin intends to further increase its market share of residential and large-scale projects.
For more information, please contact:
Shamik Nandi, Senior Manager – Marketing Communication, Daikin India
9953001462 shamik.nandi@daikinindia.com
Bhaskar Majumdar, Group Head, Adfactors PR
9811194244 bhaskar.majumdar@adfactorspr.com
at March 21, 2016 No comments: Links to this post

Email ThisBlogThis!Share to TwitterShare to FacebookShare to Pinterest
The Economic Summit of China Development Forum 2016 in Beijing, capital of China, March 19, 2016. The three-day China Development Forum 2016
China can achieve at least 6.5-percent growth in the next five years if everything goes as planned, said Sri Mulyani Indrawati, Managing Director of the World Bank on Sunday.
There will not be a sudden loss in the growth speed for the world’s second largest economy, said Indrawati at the two-day China Development Forum 2016 that opened in Beijing.
In the 13th Five-year Plan released this week, the Chinese government has recognized what need to be done, according to the managing director.
It’s important for China to change its growth model: relying more on domestic sources of growth, said Indrawati, adding that the process, however, will not be immediate.
The most important thing is where the growth comes from, rather than the speed, according to her.
She said the Chinese economy is increasingly powered by consumption and the service sector, an indication that the adjustment of growth model is happening.
“The government knows the new direction as was announced in the five-year plan,” said Indrawati, adding that policymakers should forget “the muscle memory” — the government’s old way of managing the economy.

(Xinhua) — World media organizations have pledged to enhance cooperation in an era when traditional media is facing great challenges.
At the World Media Summit (WMS) that opened Sunday, more than 350 delegates of media outlets from 100 countries gathered here to exchange their views on the theme of “The Future of News and News Organizations.”
CHALLENGES, OPPORTUNITIES COEXIST
The two-day meeting, hosted by Qatar-based Al Jazeera, comes at a time when media is undergoing profound changes and audience demands are increasingly diversified. Traditional media is facing both major challenges and unprecedented opportunities.
“As executives of media organizations, we all feel the profound changes in the media ecosystem,” WMS Executive President Cai Mingzhao said in his speech titled “Deepening Cooperation and Exchanges, Facing Our Future” at the opening ceremony.
Cai, who is also president of Xinhua News Agency, said the rapid development of information networks and digital technology is catalyzing a revolution in mass communication and has brought about unprecedented challenges for traditional news organizations around the world.
“The Internet, while bringing challenges, has opened a new door,” he said, adding that the advantages of professional news organizations are “prominent” and “irreplaceable.”
“The situation of the media environment is becoming severe,” Masaki Fukuyama, president and editor-in-chief of Kyodo News told Xinhua, echoing Cai. “It is a very meaningful opportunity for each media organization to exchange opinions about this situation.”
Gary Pruitt, president and CEO of the Associated Press, also highlighted the importance of such a gathering of the world media in current circumstances.
“It’s an important gathering of the world media with the focus on the future of the news, and how we can meet the challenges of the market,” he said.
“The way of news distribution and the audience have changed today, which is the reality we have to deal with,” Pruitt told Xinhua, adding that he will also focus on the common challenges encountered by the world media in his speech. 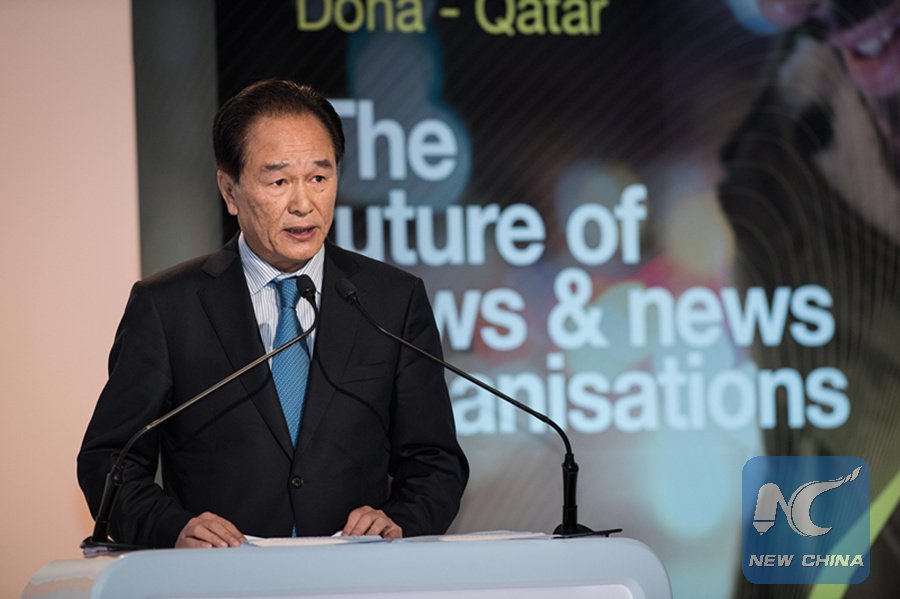 Email ThisBlogThis!Share to TwitterShare to FacebookShare to Pinterest
North Korea has launched short-range projectiles in the direction of the Sea of Japan, South Korean .
Yonhap News Agency ‏@YonhapNews 34m34 minutes ago
N. Korea launches several short-range missiles into East Sea bit.ly/1UwthQF
Yonhap — North Korea fired several short-range missiles into the East Sea on Monday in the latest of a series of provocations in reaction to the ongoing South Korea and U.S.’ joint military drills.
The missiles were launched from the northeastern city of Hamhung at around 3:19 p.m., and flew some 200 kilometers, according the Joint Chiefs of Staff.
“Our military is keeping close tabs on the situation and standing by with a heightened defense posture,” the JCS said.

Share
HOLI CELEBRATIONS PLAN & OTHER AGENDA’S ARE BEEN DISCUSSED