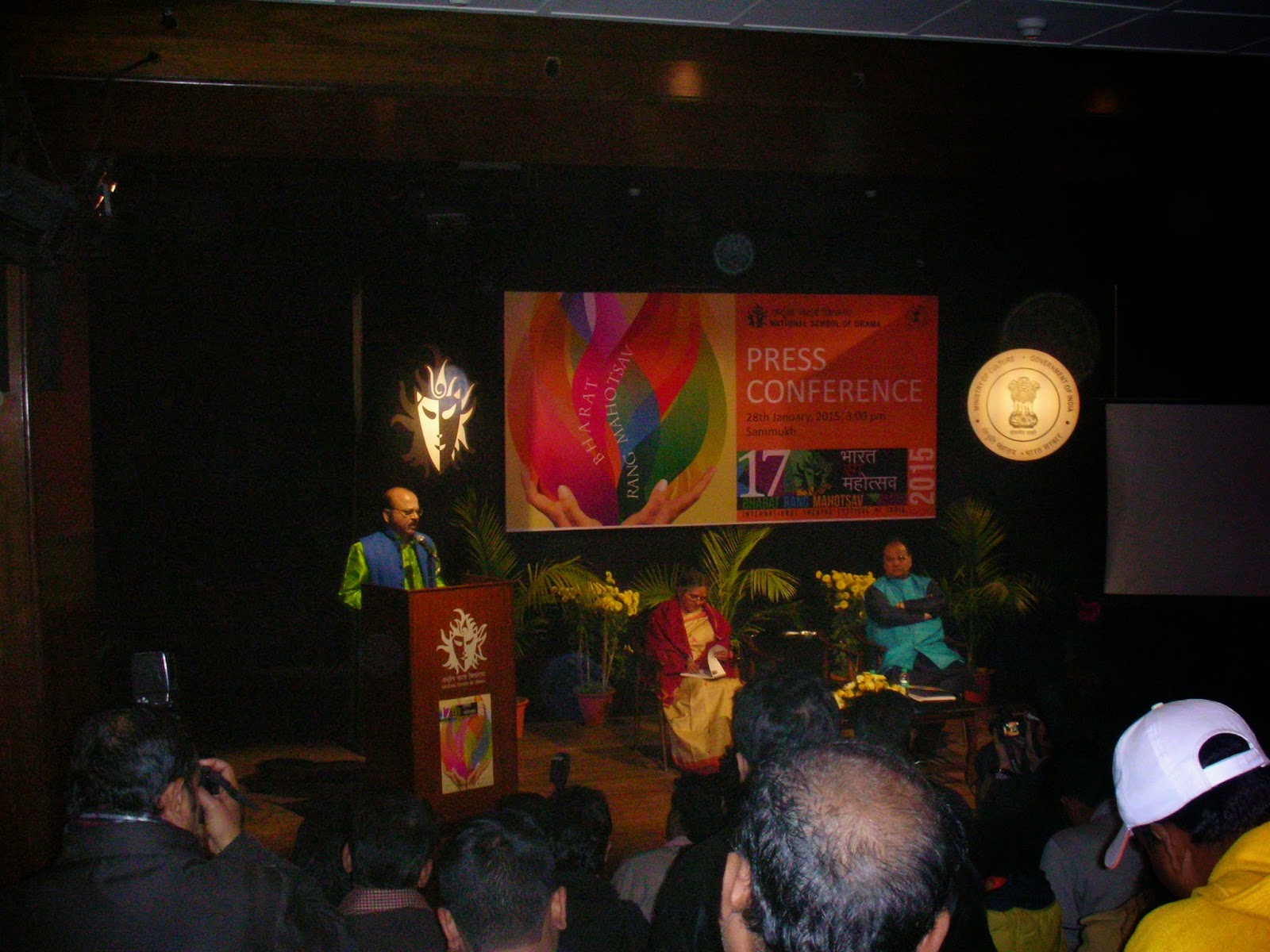 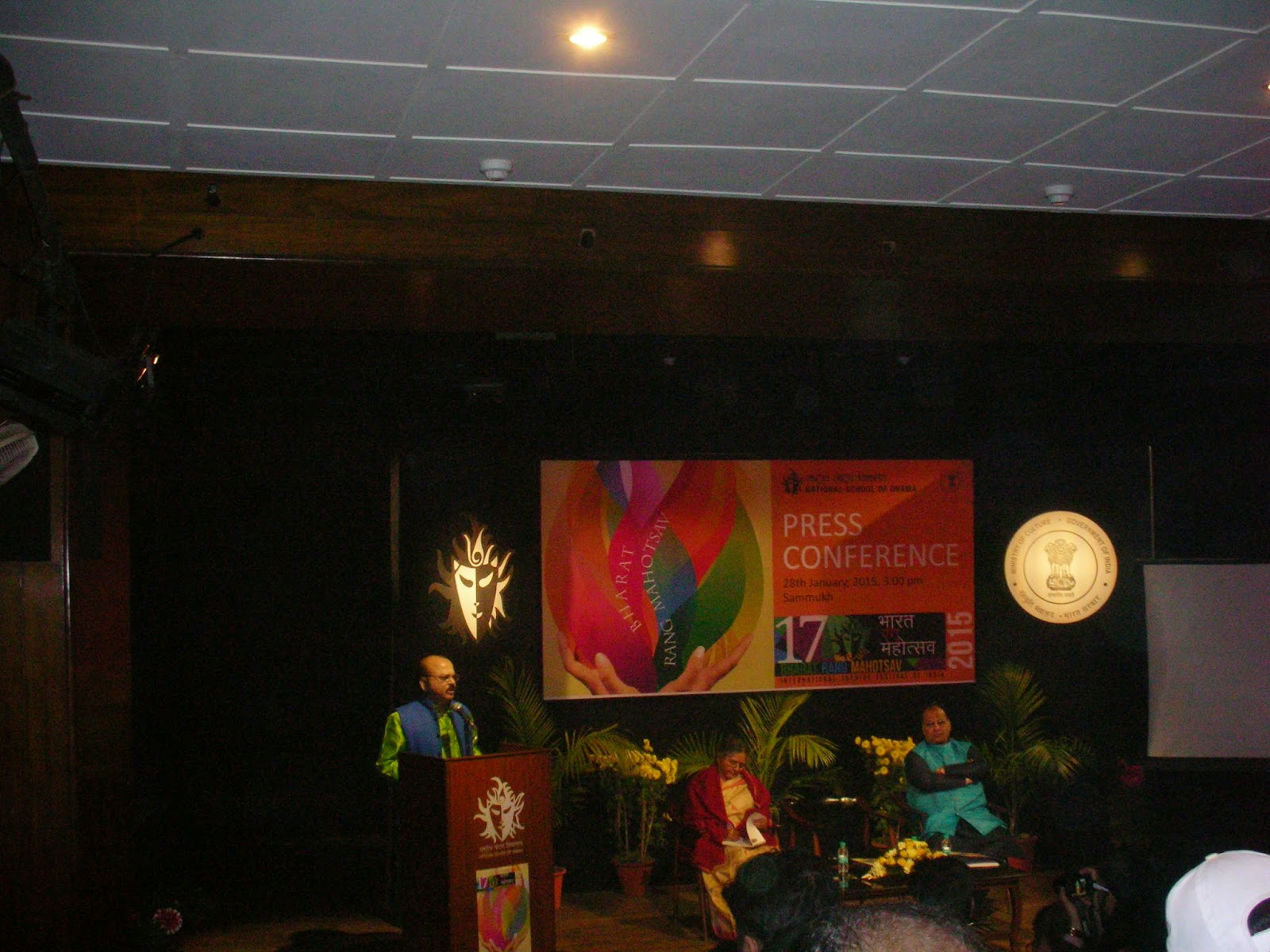 Twelve countries across globe and almost all the states of India to participate in mega event of National School of Drama 's 17 Bharat Rang Mahotsav, to be held in Delhi from February 1st to 18th February, 2015.

12 countries from around the world and almost all the states of India to participate in National School of Drama’s 17th Bharat Rang Mahotsav, to be held in Delhi from February 1st to 18th
New Delhi, January 28, 2015: At a time when the world is getting increasingly divided and fragmented, National School of Drama, one of the foremost theatre training institutions in the world, is attempting to send out a strong message of bringing people together with its flagship theatre festival, Bharat Rang Mahotsav. The 17th edition of the festival has been conceptualized and designed with the theme of ‘Breaking Borders’, and would be held in New Delhi from 1stFebruary to 18th February 2015.

This year, Bharat Rang Mahotsav, promises to be bigger and better than ever with over 12 countries including the likes of USA, UK, Germany, China, France, Poland, Switzerland, Norway, Israel, Sri Lanka, Nepal, Bangladesh, among others, taking part and showcasing around 150 plays to theatre lovers in the city. The festival will also travel to other parts of the country with plays being showcased in Agartala (Tripura), Jabalpur (Madhya Pradesh), Aurangabad (Maharashtra) and Panaji (Goa).

To popularize theatre among the youth and to use theatre as a learning process, National School of Drama is facilitating various colleges to perform in this year’s Bharat Rang Mahotsav. Various theatre troupes and rock bands of Delhi University colleges and Jawaharlal Nehru University will find an opportunity to showcase their talent. The idea behind the initiative is to connect the young generation with theatre, which will create an environment for better theatre productions. Several ambience performances comprising of folk performance, children’s theatre are being scheduled for non-stop entertainment during the 18 days festival.

NSD Repertory Company’s “Ghazab Teri Adaa” directed by Prof. Waman Kendre will be the inaugural performance of the festival on 1st February at Kamani auditorium at 6.00pm. NSD Repertory Company has been conferred with this honour as it is celebrating its 50th year.

Dr. Mahesh Sharma, Minister of State of Culture and Tourism (Independent Charge) & Civil Aviation, Govt. of India and eminent stage and film personality Om Puri have consented to be the Chief Guest and Guest of Honour at the inaugural ceremony.

For the first time, NSD is venturing to set up a Theatre Bazar for the theatre lovers, enthusiasts and audience in general. In the Theatre Bazar products related to theatre will be showcased.

In another global initiative, National School of Drama, for the first time, will also organize “World Theatre Forum” on the theme of– Breaking the Borders, where in theatre luminaries from all over the world and across the country will come together to interact with the audience. Various discussions and seminars will take place around the theme “Paridhi Ke Bahar-Natak Bazar”, to bring marginalized voices to the national platform. “Meet the Directors” will facilitate audience to interact with directors from the previous day’s performances, everyday in the morning starting from February 3rd   at 10am at Antarmukh.

The 17th Bharat Rang Mahotsav will pay tribute to Shambhu Mitra (1915-1997) and Begum Akhtar (1914-1974) for their birth centenary, and Veenapani Chawla (1947-2014) who passed away recently.
This will include performance, exhibition and lecture on Shambhu Mitra, Jamal-e-Begum Akhtar, enacted by Prof. Vidushi Rita Ganguly, The Tenth Head directed by Veenapani Chawla and presented by Adishakti Laboratory for Theatre Art Research, Pondicherry.

The closing ceremony will be on February 18th where Aadirangam - an ensemble of 8 tribal group performers from all over India will be presented by National School of Drama, coordinated by Dr. Laique Hussain.

The entire NSD campus will be transformed into a festival ground for the next 18 days where food, music, handloom & handicraft products will be available for its audience. A huge 3D replica of NSD has been created to enhance the ambience of the festival.

For the first time Lalit Kala Akademi, Sahitya Akademi, Sangeet Natak Akademi and other government cultural bodies have come forward to be associated with the festival. This year the theatre lovers will be able to book tickets online on the National School of Drama’s website from 29th January, 2015 onwards.

Prof. Waman Kendre, Director, National School of Drama said, “Theatre can’t grow in isolation. This year we are bringing the world theatre to one stage, where 12 other nations will showcase their theatre and witness India’s varied theatre forms be it folk, tribal or modern from almost all the states. We are emphasizing on youth participation in the festival as they are the torch bearers of theatre in the future.”

Shri Ratan Thiyam, Chairperson, National School of Drama Society said, “Every year National School of Drama thrives to contribute and leave a mark in the field of theatre and Bharat Rang Mahotsav works as a global platform towards that direction.”
#  #  #
National School of Drama
The National School of Drama is one of the foremost theatre training institutions in the world and the only one of its kind in India. It was set up by the Sangeet Natak Akademi as one of its constituent units in 1959. In 1975, it became an independent entity and was registered as an autonomous organization under the Societies Registration Act XXI of 1860, fully financed by the Ministry of Culture, Government of India. Training in the School is highly intensive and is based on a thorough, comprehensive, carefully planned syllabus which covers every aspect of theatre and in which theory is related to practice. As a part of their training, students are required to produce plays which are then performed before the public.

Bharat Rang Mahotsav
The Bharat Rang Mahotsav was started in 1999 by the NSD in order to contribute to the growth and development of theatre across the country. From being a national festival that presented the work of some of the most creative theatre workers in India, it has grown into an international event, hosting theatre companies from around the world, and is today acknowledged as the largest theatre festival of Asia dedicated solely to theatre. In addition to the national and international performances that are staged during the Festival, the fare also includes exhibitions, installations, interactive sessions with directors and performers for the general public and professionals, a vibrant theatre caf鬊open forums and meetings and a shorter festival in other cities to which some of the productions travel.

This message has been truncated.

Show Full Message
Reply, Reply all or Forward | More
at January 28, 2015 No comments: Links to this post