Protest in London against Turkish offensive in Afrin. US and Turkey  argued over the status and future of Syria’s Kurds. Ankara has repeatedly slammed Washington for delivering military supplies to Kurds in Syria.
US told Ankara it will not deliver any more weapons to the Syrian Kurdish PYD/YPG fighters, Turkish media report. The news comes as the Turkish operation ‘Olive Branch’ in northern Syria has entered its eighth day. On Saturday Turkish Foreign Minister Mevlut Cavusoglu said that Washington should immediately withdraw from northern Syria’s Manbij region, located some 100 km from Afrin. Speaking to reporters, the top official said that the US should take steps to end its support of the Syrian Kurdish YPG militia.
Turkish Presidential Spokesman Ibrahim Kalin and US National Security Adviser H.R. McMaster held a phone call on Friday evening, Anadolu news agency said. McMaster confirmed that Washington would no longer provide weapons to fighters of the Kurdish People’s Protection units (YPG) and the Democratic Union Party (PYD). 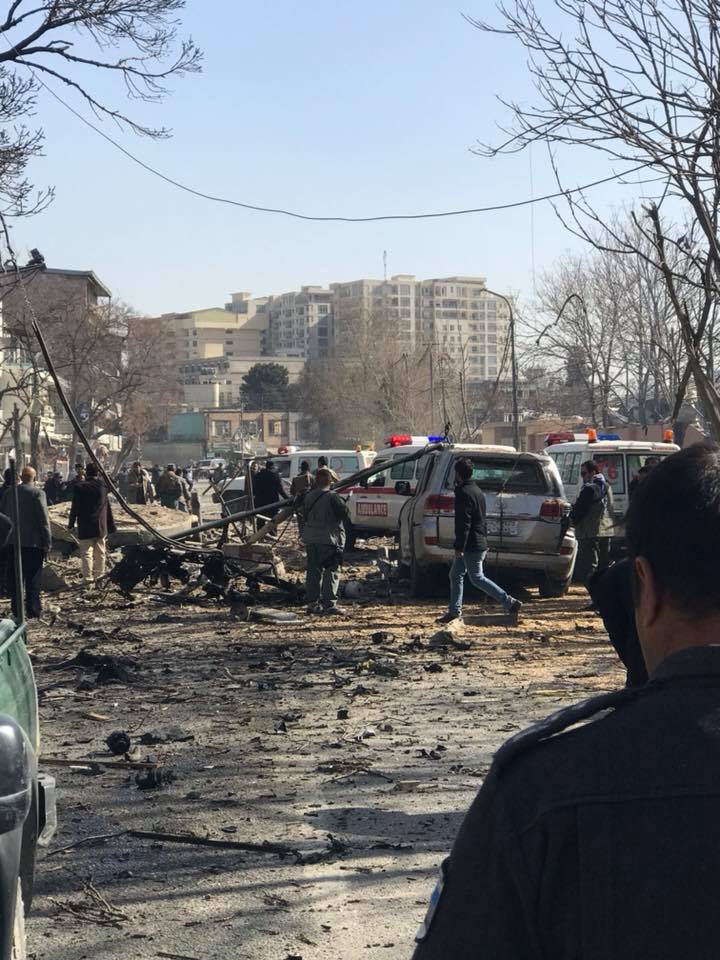 The explosive device was hidden in an ambulance and detonated at a police checkpoint in the Afghan capital, Reuters reported citing unnamed officials.The blast ignited close to the building which formerly housed Afghanistan’s Interior Ministry. An eyewitness told the news outlet the blast was caused by a car bomb, which detonated near the gates of the former ministry building.Nearly hundred people were killed and 151 injured by an explosion in a central district of Kabul, close to where several embassies and government buildings are located, local media report citing officials.Taliban has claimed credit for the blast, according to Pajhwok. It comes just a week after a deadly attack on the Intercontinental Hotel in the city, likewise claimed by the Taliban.
President of India‏Verified account @rashtrapatibhvn
Shocked at news of the terrorist attack in Kabul. Our thoughts are with the bereaved families and with those injured. India stands shoulder-to-shoulder with the people and government of Afghanistan in the fight against the forces of terror and evil #PresidentKovind
India has strongly condemned the terrorist attack in Kabul today calling it barbaric and dastardly. In a statement, the External Affairs Ministry said, there can be no justification for such reprehensible attacks and the perpetrators and their supporters should be brought to justice.It said, India stands in solidarity with the government and the people of Afghanistan at this difficult times of mindless violence and terror imposed on them.
It also conveyed its heartfelt condolences to the next of kins of victims of the terror attack and prayed for speedy recovery of those injured and offered all possible assistance, including for treatment of injured.

UN Secretary-General Antonio Guterres said the global development would not have success if Africa fails to take advantage of its youth dividend.
“The international community will not find peace and security if Africa is not able to manage not only its conflicts, but above all, to make prevention and find a solution to its conflicts,” he said.
Guterres also praised African countries for their handling of migration issues, saying that “I have always seen African countries open their doors to refugees and migrants. This is a lesson that other parts of the world should understand.”
Affirming UN’s commitment to support Africa, Guterres said the partnership between the UN and the AU is “the most important partnership.”
“Cooperation with the African Union is really a fundamental strategic element for the United Nations to be able to fulfill its mandate,” he said.
Peace and security, development, and human rights are said to be some of the common areas of interest for the UN and the AU to strengthen their partnership.
The two organizations signed an agreement on Saturday to strengthen development in Africa, it was noted. According to Moussa Faki Mahamat, AU Commission Chairperson, AU’s flagship Agenda 2063 and the global 2030 Agenda for Sustainable Development (SDG) can go hand-in-hand towards the continent’s development.
The targets of the SDG mainly focus the economic, social and environmental aspects of development.
Sagar Media Inc: MHA Shri Rajnath  Singh thanks Authors and belessed them and appreciated the  book “On the Trail of the Black”. He said have not read complete book  but gone through some pages, this book deal corruption in many sectors. Corruption mitigate development, income disparity cause civil unrest. Digital,  Transparency, procedures policy are the keys to mitigate corruption in prevailing system.
MHA Sri Rajnath Singh said, Our PM is more concerned about corruption which dilute corruption.SIT formed in first cabinet meet, health sector need corruption free.. This is an  important step of government reduced generic medicines and paid attention to other vaccinations available  for infants. 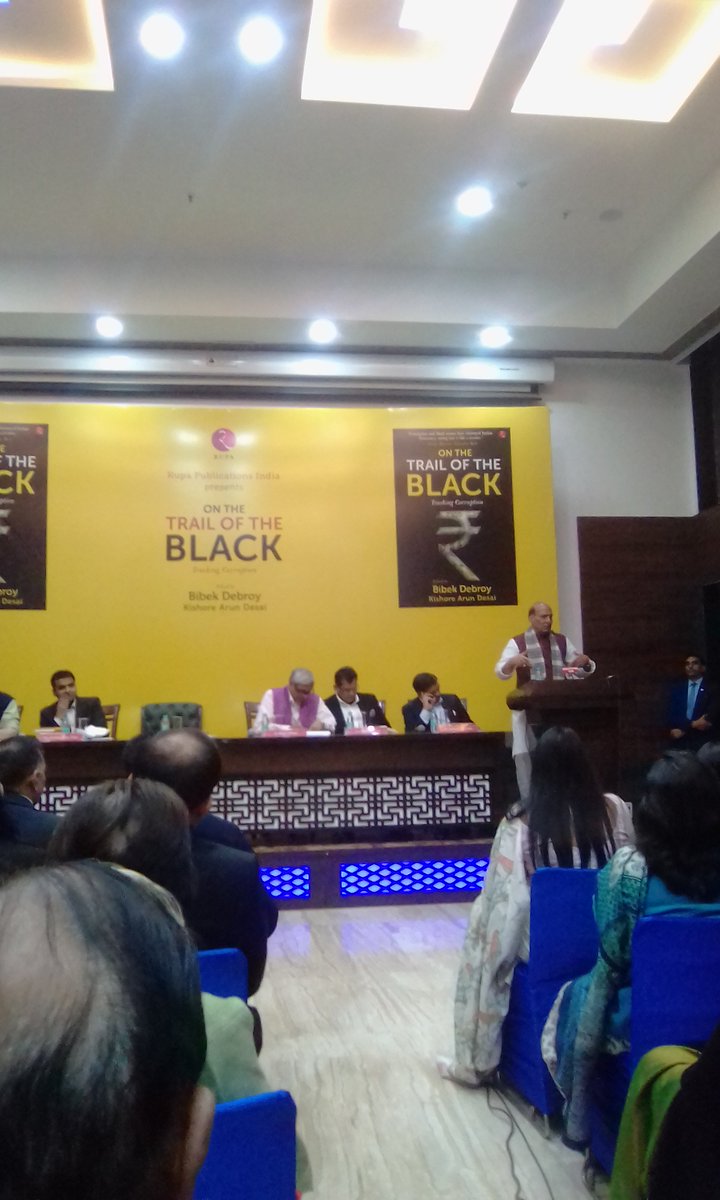 Government is making an efforts in the Tax collection that too  is imp to reduce corruption .We all need fight corruption.  Minister further said Education can bring change, we need in society ideal personalities and  with procedure reforms like DBT MENREGA is made Easy with Aadhar . Society need awareness. Niti Ayog Policy makers we approve. Inspiration personality need to be galvanized. There must be more respect for value based actions rather than money making acts.
Dr Advani Mahajan said, Don’t agree that we do not need of Lokpal, crypto currency surge in Demonetization, conflict of interest ,FSSAI Nexus MNC , 350 consultant paid by MNC shunted out, corruption need to eye nodal point of Nexus, over invoices and under invoice government fails all cases as the system lack experts in this field.
Mr Amitabh address In government tenure of forty years I have better experience many laws knots together making loop holes and destroy the systems. From couple of years  digital online, make easy one page to three page law process, Institutions  need strength Medical commission medical council, UGC  need restructure, tech need to be used. DBT Aadhar benefiring tens of  cr beneficiaries thus  break bureaucratic nexus.
CEO Niti Ayog said Government procurement where corruption dwell,  E procurement GEM is best  and bid and auction with transparency makes the scenario better for economy. In new institution India need simple easy procedures, intelligence and other Alternative intelligence to take over.
Director NMML, Mr Shakti Sinha briefing on book Launch,” On the Trail of the Black”.
Many things need to be done. internal deptt inquiry,  balancing act of CVC, CBI, other  institution, law process more important to solve laws etc. No one wants to break law  with bold initiatives a step to  mitigate corruption.
Siddikur Rahman reigns supreme on home turf with four-shot victory at City Bank American Express Dhaka Open.

Please carry a Photo ID with you to facilitate your entry into the UN Premises; and follow standard security procedures.