‘Initiatives in Exploration Regime’ and ‘Mine Safety in Coal Mines’

enkaysagar.wordpress.com – Shri Piyush Goyal Chairs Meeting of Parliamentary Consultative Committee of Ministry of Mines and Ministry of Coal on ‘Initiatives in Exploration Regime’ and ‘Mine Safety in Coal Mines’ Shri Piyush… Shared bySagar Media Inc
enkaysagar.wordpress.com – Fly from Kuala Lumpur to Honolulu from as low as RM499* OSAKA, 10 February 2017 – AirAsia X continues to lead the way with the launch today of its Hawaii route, the airline’s maiden service to the …

All Photos →
Posted: 10 Feb 2017 05:05 AM PST
New Delhi, February 10, 2017: GAIL (India) Limited registered a 133% increase in Profit after Tax for the first nine months of Financial Year 2016-17 over the corresponding period last year,  with the PAT increasing to Rs 3,243 crore from Rs.1,394 crore.
On quarterly basis, GAIL’s PAT in the third quarter increased by 46% to Rs. 983 crore from Rs. 676 crore in the corresponding period of the last fiscal, buoyed by a turnaround in petrochemicals segment and increase in profitability of Liquid Hydrocarbons segment.
The Company also registered growth in physical performance in all segments on quarter on quarter basis i.e. Petrochemical Sales up by 8%, Liquid Hydrocarbon Sales up by 4% and Natural Gas Marketing & Transmission volumes up by 3% & 2% respectively. The third quarter witnessed a pricing pressure in Petchem business during November and December 2016, PAT grew by 6% sequentially to Rs 983 crore.

Noida, February 10, 2017: Honey Baisoya continued his golden run from 2016 as he bagged his third title in a span of three months on the PGTI. The Delhi golfer delivered a resolute three-under-69 in round four of the PGTI Players Championship at Noida Golf Course to win the season-opener with a comfortable four-shot margin at 13-under-275.

Shamim Khan (74), Ajeetesh Sandhu (74) and Shankar Das (77), all contenders coming into the final round, couldn’t break par on Friday. While Shamim finished second at nine-under-279, Ajeetesh and Shankar shared third place at seven-under-281.

Honey Baisoya (70-67-69-69), lying two shots back in third place ahead of the final day, had a quiet first 13 holes with two birdies and three bogeys but then went on to wrest the initiative with four birdies on the last five holes.

On an extremely windy day that didn’t see too many low scores, Baisoya ran away with it after the 13th thanks to some excellent ball-striking. He closed the tournament in style with a 15-feet birdie conversion on the 18th.

Honey said, “It was an up and down round in the initial stages as I felt the pressure. But I kept myself calm and just worked towards achieving my target of two-under. The important thing was that I was more aggressive in my approach than the previous rounds. I used the driver on more occasions than before and drove really well.

“I guess my two wins last year have given me the confidence to fight back from tough situations and believe in myself even when I’m not the frontrunner on the final day. Earlier when I hadn’t tasted victory I could never convert my opportunities in the latter stages of a tournament. But that is not the case anymore.

“Among the my three wins so far, I rate this one as the best as I had some very experienced players like Shamim Khan and Shankar Das competing against me for the title till the very end,” said Baisoya, who had set a PGTI record by making 19 eagles in the 2016 season.

Shamim Khan (66-71-68-74), lying one off the pace in second after round three, wasn’t at his best in the fourth round as he scrambled through the day. He was three-over through 13 after finding the trees on two occasions and the water hazard once. The Delhi golfer’s only consolation was the 15 feet birdie conversion on the 18th.

“This is one of my favourite courses but today I kept landing it in the wrong places. My round just didn’t take off. My putting average was poor as I missed a lot of eight to 12 feet putts. The only long putt I sank was on the final hole and by then it was too late.

“Nonetheless, it’s a solid start to the season and I feel I’m getting back to my best slowly but surely,” said Shamim.

Chandigarh’s Ajeetesh Sandhu (68-69-70-74), who started the day in fourth, three off the lead, was in the race till he made the turn at one-under on Friday. However, a three-over on the back-nine dashed his hopes as he secured tied third.

Kolkata’s Shankar Das (67-68-69-77), the overnight leader by one, dropped out of contention early as he was three-over through 13 holes courtesy some erratic tee shots. He conceded three more strokes on the last four holes to close the week with a forgettable 77.

Sanjeev Kumar of Lucknow shot the day’s best score of 67 to finish tied fifth at six-under-282 along with Chandigarh’s Harendra Gupta (71).

Gaurav Pratap Singh in tied 14th at one-over-289 was the highest-placed Noida golfer.

20 hrs
PC Book Launch, “Fearless in Opposition” at NMML with  A panel discussion :

Barkha anchored panel discussion with dignitaries,  P C, Kapil Sibal , Nitesh Kunar, Sitaram Yachury. Matters cam for discussion were,  Let not fear, be fearless, the opposition must unite part of strengthening democracy and  to undo, expose the authoritarian ruler.Instead of reflexive common programme, the need of the hour to have common agenda.
CM Bihar , Nitesh and Kapil talked of sordid affair of fifth pillar in shabby state.Implicit one could sense the Media gag and ostentatiously their work as drum beater for One Person. Kapil added,Republic to be added in the List in bandwagon to which anchored soft touch to Kapil may tell the tale of her next media venture interest.
On the Subject of Demonetization, the execution of the same by  government shortcoming were discussed in threadbare deliberation  the demonetization lead massive scam.But the outcome is under the jury scrutiny with we the people , in follow up of assembly polls.
Former PM Mr Man Mihan Singh, Vice President, Congress Rahul Gandhi, Mani Shankar and Ahmed Patel  were present with others politicians.The book launch by Rupa publication was attended by media, researchers, students and important administrative officials.

Piyush Mishra, NSD graduate and famous film & theatre personality on his personal visit to NSD, met and freely interacted with NSD students and theatre lovers and shared his views on 19th Bharat Rang Mahotsav, “At NSD I have learnt a lot which is helping me today. When I was a student here there was no such Drama Festival during those days. Bharat Rang Mahotsav is a great initiative and it gives theatre lovers a very nice opportunity to interact with all varied people working in theatre in India and abroad. I love Delhi and National School of Drama where I graduated from, since my work demands that I stay in Mumbai, every year during Bharat Rang Mahotsav I want to reconnect with my days here and that is the reason that I always visit my alma mater. After being an active theatre practitioner in Delhi for 20 years, I went to Mumbai to work in the Hindi Film Industry since in India we do not have a vibrant and paying theatre industry like in America. I also believe that in films there should be some lessons, some great story intermingled with a loads of entertainment, rather than stress on realism or charaterisation, etc.”

Today, during the Meet the Director – face to face at National School of Drama, renowned theatre personality Aditi Desai, Director ofSamudraManthan said when questioned why she chose the story of a female protagonist, “the play is actually based on a true story of a female merchant sailors wife who captained a ship and made two round trips from Africa because her husband had tuberculosis. It is very interesting that we don’t have much about women sailors in our history even though our country has one of the longest coastlines in the world.” Playwright and the Lead Actor of SamundraManthan, Devaki Bharat Dave also added “in Gujarat theatre drama is very static and drawing room like we wanted to change that and do something new and bring an awe factor by adding sets that are more grand and represent an open space like the sea”

Amitava Dutta, Director of Tomar Ami when asked his inspiration for the play said, “I took inspiration from a Slovenian play called Take Me Into Your Hands, I tried to portray the relationship between the new world of ever changing technology and the old school world of book lovers and this play is dedicated to all the book lovers like me who thinks book lovers are left behind in this age of eBooks.”

The 6- part Katha Workshop Series in Performance & Craft of 19th Bharat Rang Mahotsav today had its last workshop on Marsiya. Marsiya means a lamentation for a great departed soul, an elegy. lt is a poem of mourning now mainly associated with the valour and martyrdom of Hazrat Imam Hussain in the battle of Karbala. The Marsiya adopted different formats till it finally favored the musaddas, a six-line verse of a rhyming quatrain followed by a couplet with a separate rhyme scheme. The first four lines extend the story, while the couplet provides pause for reflection on the discourse. While many have written marasi, the masters who brought the Marsiya to epic perfection were Mir Babar Ali Anees and Mirza Salaamat Ali Dabeer, the two nineteenth-century Urdu poets of Lucknow. Urdu Marsiya is unique in its imagery, vocabulary and sentiment, and with its musical base has reached great heights of religious, cultural and intellectual expression. 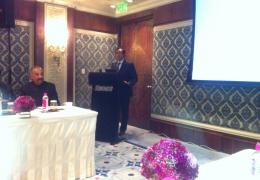