Baisoya gets into semi-finals at Goodricke East India 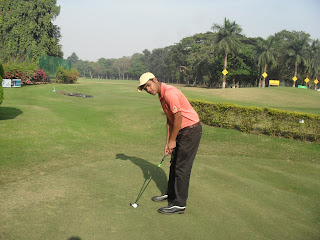 Baisoya gets into semi-finals at Goodricke East India
23rd December, Kolkata: The youngest one in the lot, Honey Baisoya, 15, was the only one to finish his game after 15th holes when he beat Ambala’s Manav Das by 5 and 3 in the quarter finals of Goodricke East India Amateur Golf Championship at the Royal Calcutta Golf Club, Kolkata. Others who made it to the semi-finals were Bangalore duo S. Chikkarangappa and Khalin Joshi along with Chandigarh’s Angad Cheema.
Currenty No. 3 on the junior circuit, Baisoya went one-down only once on the 6th hole and he never looked back from there. After winning the 7th and halving 8th, Baisoya made pars on the 9th and 10th while Das bogeyed both the holes for going two-down. Both the players halved the 11th and an aggressive Baisoya made a par on the 12th to go 3 up where Das made a bogey. The chances of Baisoya’s victory got much clearer on the 13th when he hit 2 yards on the green and double putted from there to go 4 up while Das missed the chip putt after going in the right rough and made a bogey. After halving the 14th, Baisoya made a birdie on the par-5, 15th to win the match for 5 and 4 while Das had to close it with a par.
S. Chikkarangappa confirmed his reputation as one of the most mentally strong player on the amateur circuit once again as he capped a succession of win, over veteran Gagan Verma for 2 and 1. Chikka started off well with a birdie on the opening, 4th and 6th hole to go 3 up but Verma’s strong putting on the 9th, 10th and 12th took the game from where they started. A confident Chikka’s tee shot went 8-feet close to the pin on the 13th while he lost the 14th again to get equal. Chikka then, won the 15th and 17th after making few good up and downs to win the match.
Only local lad left in the fray, S. K. Pappu (Sr.) had to face the disappointment after loosing the match from Khalin Joshi.  Pappu, who took the advantage of his home course by going 2-up after 13 holes, made wrong chip and made three putts on 14th to remain 1-up while Joshi birdied the hole. Joshi birdied the 15th while Pappu missed the par putt and both became equal. Both of them fired good birdies on 16th to halve the hole but under-pressured Joshi hit center fairway on the 17th and made two putts from around 12 feet to go 1-up while pappu made a bogey. On the 18th, Joshi again hit the center fairway for going 2-up to win the match while Pappu had given up after going into the left tree.
The winner of last week’s RCGC Cup, Angad Cheema won a neck-to-neck match from opponent Simarjeet Singh, who is also his playing partner at the Chandigarh Golf Club. Cheema, who was never down, won the 1st while Singh won the 2nd. Both leveled after 3rd while Cheema made a birdie on 4th to go 1-up. After halving 5th and 6th, Cheema again made a birdie on 7th to go 2-up while he lost the 8th after hitting the tree for a penalty drop and stayed 1-up. Both of them halved the 9th while Cheema won the 10th to go 2-up. It was a back luck of Cheema on 11th where he double bogeyed to go 1-up and Singh made a par. After they both halved the 12th and 13th, Cheema saved his par on 14th for going 2-up while Singh dropped shots for double bogey. Singh came back with an eagle on 15th but it didn’t help him much as Cheema won the 16th and 17th for 2 and 1.
at December 24, 2011 No comments: