Israel Knesset election to be held in September

Netanyahu's Likud party submitted a bill to dissolve the Knesset  Israel's political system readies for upcoming early general elections.Kadima too released a statement following the Likud's submission, saying that the party would "support every bill to move up the elections at any date the Knesset agrees to."
Israel Knesset  election in September as the ruling Likud Party enjoys a high support rate. A national vote is not due to be held until 2013. Prime Minister Benjamin Netanyahu told his party on Sunday that 4 months of preparation ahead of the election is desirable for achieving political stability.

An opinion poll conducted by local media shows that Likud would win even more seats than it now holds in the 120 seat legislative body.Netanyahu is believed to have opted for a snap election to take advantage of his party's support rate is high.Defense Minister Ehud Barak said last week that early election would not affect Israel's stance on Iran's nuclear program. The government maintains that it will not exclude any options to stop Iran's nuclear development. Media agencies
at May 07, 2012 No comments: 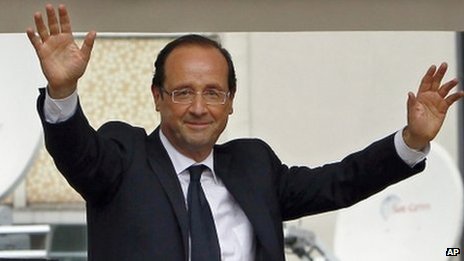 Hollande needs  tough talks with Chancellor Angela Merkel on her  tight fiscal restraints Germany has imposed on the Eurozone.Failing to reach logical end  Merkel is unlikely to back down, the joint currency could be back at the brink of meltdown in a matter of weeks. Euro to plunge in Asian and Pacific trade after elections in France and Greece rekindled concerns over Europe's sovereign debts and credit problems.

Socialist Francois Hollande wins President poll,he has defeated Sarkozy with votes respectively in ratio of 51.1 to 48.2.President elect Francois Hollande  arrives to the town of Tulle to give his victory speech.
Many have waited for this moments and many has never witness this moment.I imagine and share their emotion.Never was two France,Those voted and those not voted  are not separate but all are one,France united.
We promise for success and life for all nationals.Public Schools ,environmental demands the ecological change needed,justice, youth for each one, what can be best done  for them. Values of the Republic ,the quality,human dignity,quality between men and women,secular for all the long march continues .
The mandate given to me today I am responsible towards  my country.I thank all those voters who made this moment possible.
European reconstruction,the jobs,the future,Ladies and Gentleman we are not just any country on this planet but we are France.It is my role to free from dictatorship and corruptions and keep the values of the republic through out the world. Six May date Great day for our country and is new start of the Europe and world.Values likes peace,prosperity for all. Between us the relationship of Trust.
May we be victorious this evening.Like to thank my people and owe you everything  to my party with this election be in service of France.
at May 07, 2012 No comments:

Clinton in Kolkata on her three day visit to India

US Secretary of State Hillary Clinton arrived in Kolkata today on a 3-day visit to India. She will hold talks with West Bengal Chief Minister, Mamata Banerjee on Monday at Writers Building in Kolkata.Writers’ Buildings, the venue of the meeting between Ms Banerjee and Ms Clinton, has been converted into a virtual fortress.
The FBI teams inspected the building together with top city police officers and intelligence officials. US secretary of state Hillary Clinton on Sunday visited Victoria Memorial, the grand edifice of the British Raj here, and was delighted to see some exhibits. Ms Clinton will fly off to New Delhi in the afternoon on Monday.
During her stay Tuesday  in the national capital, she is expected to call on Prime Minister Manmohan Singh apart from holding talks with Krishna, during which they will also review progress made in their countries’ strategic partnership ahead of the India-US strategic dialogue to be held in Washington on June 13.
The meeting between Clinton and Indian leaders gains significance as it comes immediately after her high-level talks in China and ahead of the crucial NATO summit in Chicago, where some important decisions are expected to be made on Afghanistan. “The entire gamut of bilateral relationship apart from all those issues which impinge on the Indo-US partnership will be discussed,” an official source said in New Delhi.
Clinton arrives in Kolkata today in the first leg of her three-day visit to the country.During her two-day stay in the city, she will meet West Bengal Chief Minister Mamata Banerjee among other engagements. Chief Minister Mamata Banerjee,and Hillary Clinton US Secretary of State Hillary Clinton to meet on Monday and the agenda of discussion with CM Mamata Banerjje FDI in multi-brand retail and other economic reforms are likely to come up at meeting. Discussions over US investment in West Bengal would also be on the discussion.
US, which has imposed sanctions against Tehran, has been asking India to restrict its import of crude oil from Iran but New Delhi has been maintaining that it only accepts sanctions which are made by the United Nations and not unilateral sanctions. Senior officials in the US administration have maintained that discussions over India-Bangladesh ties and trade ought to come up in the discussions between Clinton and Banerjee.  The Indo-Bangla Teesta Water Treaty, which is being opposed by the West Bengal Chief Minister, is also expected to be discussed during their meeting.  The issue of FDI in multi-brand retail and other economic reforms are also expected to be discussed.

by sagarmedia
Nepal’s prime minister has formed a new coalition government to work toward introducing a new constitution that has been delayed due to political turbulence between ruling and opposition camps.Cabinet led by Prime Minister Baburam Bhattarai was inaugurated on Saturday at the presidential palace in the capital, Kathmandu.
The new development came after ruling and opposition parties agreed to cooperate in finalizing a new Constitution by May 27th, the deadline set by the Supreme Court. But difficult negotiations are expected as there are still differences among political parties over fundamental issues.They have not yet agreed on which form of governance the country should adopt, a presidential system or a parliamentary cabinet system.
at May 07, 2012 No comments: