By Rajiv Kumar
The focus on the land acquisition issue during the recently-concluded National Executive conclave at Bengaluru is most welcome. Even more reassuring is the recognition by the BJP’s top brass that it is faced with a quintessential political issue, which requires large-scale public mobilisation in its support. So, kudos to Prime Minister Narendra Modi for effectively calling the UPA’s bluff and taking the fight directly to the farmers.
It is not merely landownership but the much bigger question of modernisation of Indian agriculture at stake. Modi did well to point to the miserable living conditions of the large majority of our farmers, rising debt and suicides. His call to take the message directly to the farmers, 90% of whom are not affected by the Land Acquisition, Rehabilitation and Resettlement (Larr) Bill or its amendments, in any way is well directed.
A survey of 5,480 farmers conducted in late 2013 by the Centre for Studies of Developing Societies (CSDS) showed that 62% farmers were willing to leave farming if they found an alternate job; 37% did not want their children to continue with farming; nearly half of the surveyed farmers believed their conditions were bad; and 22% have actually begun to dislike farming because of agriculture not being a viable occupation any longer. This is amply reflected in the average outstanding debt of Rs 47,000 per farmer household, which tragically results in farmers’ suicides during the smallest crisis.
As many as 59% of rural households do not own any land. Another 28% have land holdings of less than 0.5 hectares. Therefore, 87% of the rural population is desperate to end their dependence on agriculture. Only 0.5% of India’s farmers have land holdings larger than 10 hectares and in the vicinity of urban centres. They are the only ones who could be adversely affected by the proposed amendments to Larr.
Land acquisition is an issue that affects less than 10% of the farmers’ households. Also, Indian agriculture in its present state is simply not an economically viable occupation for the vast majority (nearly 85%) of the rural population. Modi should not flinch from his clearly expressed resolve to take the battle to the Congress and its allies. He should see this as probably the most important political struggle in post-independence India to wean the peasantry away from a backward and unviable agriculture and connect farmers with the dynamic modern Indian economy.
This will be a tough battle, but one that must be won for saving the vast majority of our farmers from a life of penury and deprivation. But first, the BJP will have to take the necessary steps to build the required trust between the farming community and the party, which is perceived widely as an urban, traders’ and businessmen’s party.
The trust will be built by convincing farmers that rapid development and modernisation of agriculture is the only way forward to end the continuing dualism between Bharat and India. It is up to the BJP and its allies to articulate this development urge in the Indian countryside and use it to mobilise poor farmers in support of proposed amendments. Indian farmers want to be treated as partners, not as policy objects.
Four additional steps are required. One, farmers have to be convinced that infrastructure development that needs large tracts of land will directly benefit them. Two, compensation being offered, together with the promise of employment for those whose livelihood is affected, must be — and must be seen as — a good deal.
Three, district administrators should be asked to draw up in the shortest time possible an inventory of land holdings by the government, its associated agencies and public sector units in their districts. This would help in convincing farmers that government will actively discourage land-grabbing by using available land for new projects.
Finally, land in the vicinity of urban agglomerations should be opened for multiple uses, in contrast to the current practice of project-specific change in land use. This will also eliminate the rampant corruption, inherent in the extant system. It will also drive up the price of all land to its marketdetermined levels in a most transparent manner and ensure that no acquisition can take place at lower than market rates.
It will also disprove those who assert that the present compensation package under Larr does not inordinately raise the prices of land. Aland market must emerge in India. This is a necessary condition for agriculture modernisation.
(The writer is director, Pahle India Foundation)
Posted just now by Sagar Media Inc
Posted 2 hours ago by Sagar Media Inc
at April 07, 2015 No comments: Links to this post 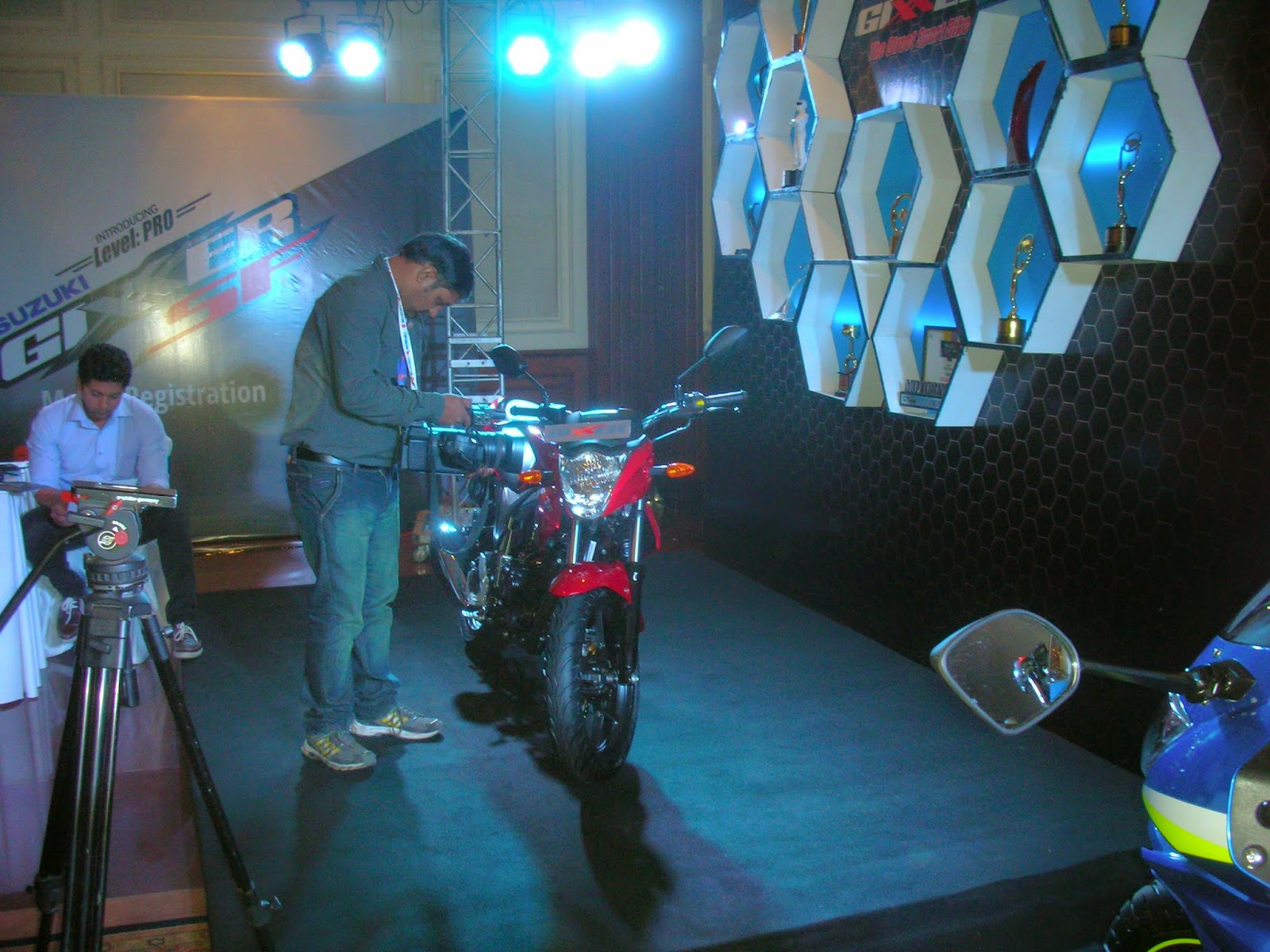 New Delhi, April 7, 2015: Suzuki Motorcycle India Private Limited (SMIPL), a subsidiary of one of the world’s leading two-wheeler manufacturers, Suzuki Motor Corporation, Japan, has launched the Gixxer SF, a fully faired version of its flagship motorcycle, the Gixxer.
The premium looking Gixxer SF has aerodynamic full sport fairing which has been developed in the same wind-tunnel where the legendary Hayabusa, GSX-R and MotoGP machines are developed. The fairing has been designed to give maximum wind protection to the rider, reducing turbulence and drag, thereby delivering great aerodynamic efficiency. This directly results in higher down force for stable braking and lower drag for better handling at higher speeds.
Every feature of the new Gixxer SF is designed to give a sporty and premium look - from its futuristic-looking aluminum exhaust end cover to the new clear lens indicators. The pinstripe on the wheels gives it a sharp, edgy look, guaranteed to appeal to all motorcycle lovers. The Gixxer SF comes with a new key mascot to instil pride of ownership.

The Gixxer SF has the powerful and exciting engine of the most awarded motorcycle in 2015, the Suzuki Gixxer, which was just launched last year. The ultra-light weight and punchy engine with cutting edge            technology enables the Gixxer SF to deliver power without compromising on fuel economy. This 155cc engine with a five-speed gearbox beneath Gixxer SF’s sleek fairing provides exceptional running performance with a broad low-end torque and dynamic mid-range power for strong acceleration which gives riders a thrilling and superb ride.
According to Mr. Atul Gupta, Executive Vice President, SMIPL, “Young India is driving growth in the 150 cc bike category, a segment which has witnessed consistent growth in the motorcycle market. Suzuki is looking at expanding its presence and appeal among young customers with products that address their desire for style, performance and mileage. We have won customer hearts with the Gixxer. We are confident that the Gixxer SF too will thrill young buyers across India and further strengthen our market position.”
To commemorate Suzuki’s return to MotoGP racing in 2015, a special edition Gixxer SF is also being launched, which will sport Suzuki’s ’Racing Blue’ colours (Metallic Triton Blue). Gixxer SF will also be available in Glass Sparkle Black and Pearl Mirage White, at a price of Rs. 83,889 (Ex-showroom, Delhi).

Suzuki two-wheelers has introduced a path-breaking and cutting edge                        technology to the Indian market in the form of SEP engine. The engine enables the motorcycle to deliver top-class fuel efficiency without compromising on power or performance.

The engineers at Suzuki, with their vast experience and racing heritage have developed this revolutionary new cutting edge                       technology which is achieved by reducing all kinds of mechanical losses, efficient design of every component and attention to detail in our manufacturing process. This helps achieve the best of both worlds – economy and performance.
ABOUT SUZUKI MOTORCYCLE INDIA PVT LTD (SMIPL)
Suzuki Motorcycle India Private Limited is a subsidiary of Suzuki Motor Corporation, Japan wherein they have the same manufacturing philosophy of VALUE PACKED PRODUCTS right from the inception. SMIPL manufactures two-wheelers best suited for the valuable Indian customers. The Company started its India operation in February, 2006.

Posted 2 hours ago by Sagar Media Inc
at April 07, 2015 No comments: Links to this post