Will not walk away from Afghanistan after 2014: NATO

2012-05-21 09:05:20 - Nksagar Sagar Media Inc: New Delhi:
The member nations of the powerful NATO, including the US and its other international partners, would not walk away from Afghanistan after 2014 when all the international forces withdraw from this war-torn country, the NATO chief has said.

Once the Afghans have full responsibility by the end of 2014, our combat mission will come to an end. But we will not walk away. Once transition is completed, NATO will lead a new mission, to train, advise and support the Afghan security forces," the NATO Secretary General, Anders Fogh Rasmussen, told reporters at a news conference in Chicago on Sunday.

Addressing a news conference at the end of the first day of the NATO Summit in Chicago, he said that today the discussions would focus on Afghanistan, adding the meeting, attended by 60 world leaders, will send a strong signal of commitment to the Afghan people.

"We have taken important steps on the road to a stable and secure Afghanistan. As
we agreed with President Karzai in Lisbon, our shared goal is for the Afghan forces to be fully responsible for their country's security by the end of 2014.And we are on track," Rasmussen said.

The Afghan forces are already in the lead for providing security for half the population and soon, that will rise to over 75 percent, he said.

"By the middle of 2013, we expect the Afghan forces to be taking the lead for security right across the country. As they step forward, our focus will shift from combat to support - but we will remain combat-ready," the NATO chief said.

Responding to questions, Rasmussen hoped that the international community would come forward to meet the target of USD 4.1 billion per annum to fund the sustenance of the Afghan national security forces.

A number of allies and partners have announced concrete financial contributions for Afghan security forces after 2014, he said.

"Based on these announcement, and more would come I am sure, I am optimistic about reaching the overall goal of finding around USD 4 billion a year to finance the Afghan security forces in the future," he said.

"Let me stress that USD 4 billion a year is not a responsibility of NATO and ISAF alone. It's a responsibility of the whole of the international community, but I am sure NATO allies and ISAF partners would pay a fair share of this overall bill. We are on the right track," Rasmussen said.
at May 21, 2012 No comments: 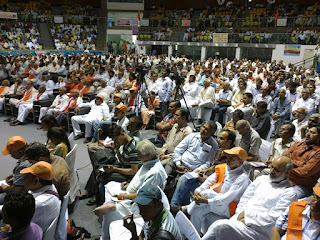 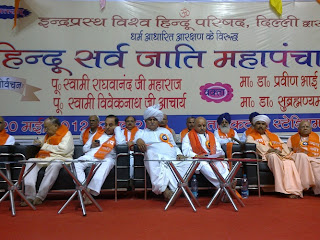 New Delhi, May 20, 2012. Agitated by allotting 4.5% quota out of Hindu OBC category and accepting recommendations of Sachchar committee and Rangnath Mishra committee by the Union Government, Hindu Sarv Jati Mahapanchayat (all cast Maha Panchayat of Hindus) today resolve to scrap it. Addressing the Mahapanchayat first ever called by VHP in Delhi the international working president of VHP Dr Parvin Bhai Togadia said that govt. of Bharat must scrape it in the national interest as the decision is unconstitutional and would pace the pay for another division of the country on religious lines. Muslims and their leaders who want reservation must be sent to Pakistan, he lauded.

Addressing the large gathering in TalKatora indoor stadium, the Janta Party supreme Dr Subhramanyam Swami said that when Muslim have ruled us for over 500 years and Christians for over 200 years then how they could be requires reservation. When there is No cast in these two, there is No question of any type of reservation, he asserted.
‘Hindu Roti-Shiksha Bachao’ agitation (save Hindu Roti & Education) was also launched in the program. The program compared by Gurdeen Prasad Rustagi, state secretary-VHP was also addressed by the president of 301 villages in Delhi, Valkiki saint Acharya Vivek nath ji, Acharya Mahendra Pal Arya  & swami Raghavanand. The VHP Vice President Om Prakash Singhal, Int’l joint General secretary swami Vigyananand, secretary Jugal Kishore, state president swadesh Pal Gupta, gen secretary Satyendra Mohan were amongst those dignitaries present at the occssion.
Regards
Vinod Bansal
(Media Chief)
Vishwa Hindu Parishad-Delhi
at May 21, 2012 No comments:

Serbian opposition candidate Tomislav Nikolic won the presidential runoff on Sunday, according to media announced by the Center for Democracy and Free Elections (CeSID).

The results are based on 100 percent votes counted, the CeSID said
Tomislav Nikolic, candidate of the Serbian Progressive Party (SNS), received 49.8 percent of the vote.

Incumbent President Boris Tadic, candidate of the Democratic Party (DS), received around 47.0 percent.
The vote turnout was 46.2 percent.
Serbian opposition led by Nikolic has claimed victory, saying the country has a new president, media reported on Sunday.
Boris Tadic conceded defeat on late Sunday in the election, congratulating his nationalist rival Tomsilav Nikolic.
"I congratulate him on the victory," Tadic told a news conference, adding "I wish him luck."
Tadic also called on the country to keep on the process of integrating with the European Union.
at May 21, 2012 No comments:

US Geological Survey says the quake struck around 4 AM local time on Sunday.

The epicenter was 36 kilometers north-northwest of the medieval city of Bologna. The focus is estimated to be 5.1 kilometers deep.Buildings near another medieval city, Ferrara, were destroyed in the quake. Local disaster authorities say at least 7 people were killed and 50 injured.

Historic buildings are said to have collapsed in towns near the epicenter. Rescue workers are searching the debris for survivors.
at May 21, 2012 No comments: