AAP MLA Vinod Kumar Binny on Monday called off his dharna against Arvind Kejriwal government after just four hours but threatened to launch a major stir if his demands, including passage of Janlokpal bill, are not met in 10 days.
A day after he was thrown out of Aam Admi Party, the rebel MLA said he will continue support to the government on “public-related” issues and was withdrawing his stir for now as Lt Governor Najeeb Jung and Anna Hazare had suggested that “some days” should be given to the AAP government to fulfil promises made by it during the Delhi Assembly election.

“If Kejriwal government fails to bring Anna’s Janlokpal Bill in the given time, I would begin protest across the country,” Binny told reporters at Jantar Mantar in New Delhi.
He also demanded immediate setting up of ‘Mahila Surksha Dal’ and 700 litres of free water to residents along with reduction in electricity bills by upto half as Kejriwal promised during election.
“If AAP government fails to meet these three demands in the next ten days, I will begin country-wide agitation from February 6 next month,” he said.
“I am not withdrawing my support from the AAP-led government. I am giving support to the government on the public-related issues,” he added.
The MLA began his protest at Jantar Mantar at noon and called it off nearly four hours later Asked why he he was withdrawing his dharna on the first day, Binny told reporters that the LG and Hazare had suggested to him that “some days should be given to the AAP-led government so that he (Kejriwal) could work on public-related issues”.
“Women security is the first priority of mine. Before forming government, Kejriwal had said that he would form ‘Mahila Suraksha Dal’ to ensure women security in the Delhi, but he is running away from this promise,” Binny alleged.
Earlier, launching a blistering attack on AAP, he accused Kejriwal of acting like a dictator.
He met the Delhi Lt Governor to take up issues which have not been addressed by the Kejriwal government and demanded action against controversial Law Minister Somnath Bharti.<
at January 27, 2014 No comments: Links to this post

It was an afternoon to remember where the trailer of one of the most anticipated films of the year ‘Main Tera Hero’ was launched. With youthful energy and vibrancy, this event felt another aura of energy.

The king of comedies ‘David Dhawan ’ will be seen directing his younger son Varun Dhawan for the very first time. Main Tera Hero is a comic love triangle which encircles around Varun Dhawan, Ileana D’cruz and Nargis Fakhri with various twists and turns.

The Trailer of the film which recently released created a tremendous amount of buzz and people are already quite keen to see the film.

The entire cast and crew of Main Tera Hero were present on stage to interact with the media and share wonderful moments from their experiences together: Producer Ekta Kapoor, Director David Dhawan and Actors Varun Dhawan, Ileana D’cruz and Nargis Fakhri.

Directed by David Dhawan and produced by Balaji Motion Pictures,Main Tera Hero is all set to hit the screens on 4th April 2014, starring Varun Dhawan, Ileana D’cruz and Narghis Fakhri in the lead roles.– 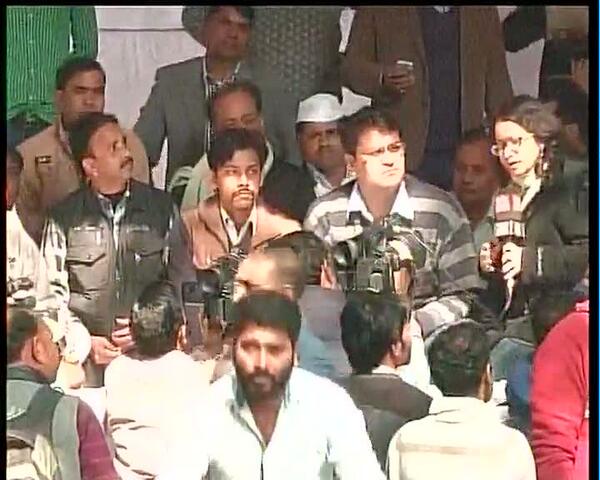 From: Media Cell AAP  Sun, 26 Jan ’14 10:16p
To: undisclosed-recipients:;
Show full Headers
New Delhi: The Aam Aadmi Party formed a disciplinary committee, on 19-Jan-2013, headed by Pankaj Gupta to look into the matter of Vinod Kumar Binny. The other members of the committee included Ashish Talwar, Illyas Azmi, Yogendra Yadav and Gopal Rai.
This disciplinary committee has decided to expel Vinod Kumar Binny and terminate his primary membership from the party, for publicly making false statements against the party and its leadership, thereby bringing disrepute to the party. A letter to the same end has been issued to Vinod Kumar Binny.
Thanks.
Regards,
AAP Media cell