45 mins ·
Parliamentarians Group for Children convenes roundtable on Sanitation
Members of the Parliamentarians Group for Children (PGC) and the Ministry of Drinking Water and Sanitation (MDWS) convened the roundtable on Sanitation in New Delhi. About 37 distinguished members from both houses of Parliament participated in the round table and put forward their suggestions to strengthen the Swacch Bharat Mission in India.
The roundtable, chaired by the Minister MDWS, Narendra Singh Tomar and convened by MP Vishweshwar Reddy also highlighted the innovative models to end open defecation in India.
The PGC is a multi-party platform, convened by Parliamentarians themselves, to engage with peers at the national and state levels for solution-based discussions and initiatives on a range of children’s issues. UNICEF has been a technical partner since its inception in 2013.
The group of parliamentarians attending the round table includes among others, Dushyant Chautala (INLD) from Haryana, Vandana Chavan (INC) from Maharashtra, Santosh Alahwat (BJP) from Rajasthan, Kahkashan Parveen (JDU) from Bihar, who have been championing issues of children at the national, state and constituency-levels.
“Access to sanitation and ensuring to end open defecation, especially in rural areas, is a top priority to develop a country where children can survive, thrive and live healthy lives. The role of legislators is pivotal in galvanizing the entire district administration and households, to take and sustain actions that result in 100 per cent coverage of ‘wanted’ and ‘used’ toilets,” said Ms. Foroogh Foyouzat, Chief Field Services and OIC, UNICEF India:
Suggestions by all the MPs were well received by the Minister, who promised that their views will be taken into account while devising campaigns at the district level.
“Parliamentarians have given valuable suggestions, which ministry will take into cognisance. We need to all work hard, so that Mahatma Gandhi’s dream of clean India is realised,” the Minster said.

nytimes.com – DHAKA, Bangladesh — A supervisor at a textile mill was arrested after a 9-year-old worker died over the weekend, and the boy’s father accused the supervisor and others of killing him because he had…

‘Should we Dalits not fall in love?’

Shared by
VANRAJ CHAVDA
roundtableindia.co.in – “Should Dalits not fall in love?” asked Shahaji Sonawane in an impassioned plea for justice for his 16 year old son Swapnil, who was brutally done to death by caste Hindus from the OBC Agri communi…

This Indian App Is Giving the Differently-Abled a Voice

Shared by
Avaz
gadgets.ndtv.com – “Acceptance is a big hurdle,” says Dr. Preeja Balan, the co-founder and Director of Octave Hearing and Speech Centre in Bengaluru. We’re talking about the reasons why technology enabled solutions a…

Shared by
Anush Aryal
wicketnepal.com – This article argues that Sompal should be chosen to bat at number  six position, highlights  his multiple strengths and a major flaw. In the beginning the decision of Indian cricket team to bat Rav…

Shared by
GlobalETA
inditales.com – Visiting a traditional weaving center in most places in India leaves you with mixed emotions. You realize the amount of hard work that goes in producing a simple piece of cloth. You see that the we…

Shared by
Amura Yachts
amuraworld.com – In the turmoil of legends and historical facts, India hides is cities and fortresses that animate the Rajasthan landscape. Its mysticism seduces us; the gods infiltrate our journey; the battles sti…

Ethipothala Falls – Get Close To The Nature

Sonali Shetty took on a restaurant for street-children

Food Lover’s Delight: Collaboration with Food Connections + Give away!

Shared by
Christine Denney
All Leisure →

Shared by
सत्यमेव जयते
scroll.in – Days before Telangana’s second birthday, an area in Chief Minister K Chandrasekhar Rao’s home district of Medak is boiling over quite literally. But the heat is not to blame. Off the Hyderabad-Sidd…

Shared by
Telangana Tweets
telugu360.com – After two years in the political wilderness, the Congress in Telangana is slowly getting its act and roadmap together. It has decided that the route to the seat of power in Hyderabad will be throug…

Shared by
Anton Guy
All Environment →

Shared by
Michael A. Kearsley
timesofindia.indiatimes.com – Navi Mumbai: A 16-year-old Dalit boy who was reportedly in a relationship with a 17-year-old schoolmate, died after he was brutally beaten up by the girl’s family members in a village in Navi Mumba…

Shared by
Only Hyderabad
All World →

Shared by
Samuel Taylor
educast.emc.com – Today, businesses are challenged to develop new and innovative offerings at ever-increasing speed. Consumers no longer tolerate waiting for businesses to introduce new products or services every 2+…

All Leads Have Turned Out To Be Bad: Manohar Parrikar On Missing AN-32 Aircraft

Why Concept Design Matters So Much | PTC

Shared by
RussB
All Science →

Shared by
Omkar sharma
firstpost.com – Mayawati’s Uttar Pradesh is by no means the rape capital of India. Madhya Pradesh and West Bengal are in a dead heat for that dubious honour. It may suit Rahul Gandhi’s politics to paint UP as a la…

Shared by
ETRealty
All Business →

Shared by
bangla_news_paper
thedailystar.net – Twenty-four children were rescued yesterday from the Narayanganj factory where Sagar Barman had been brutally killed allegedly by management officials by pumping air into his body through the rectu…

Shared by
TopUpYourTrip
deccanchronicle.com – The monsoons are perhaps the season almost everyone looks forward to eagerly in India. The showers bring immediate relief after the scorching summer months and turn the landscape lush and green. He…
All #india →

4 hrs ·
बैंकों की हड़ताल
Normal banking operations may take a hit today as public sector bank employees will go on strike to protest against proposed merger of associate banks with SBI and banking reforms announced by the government.
The United Forum of Banks Unions, an umbrella organisation of nine bank employees and officers unions representing 8 lakh staffers, has called the one day strike today.
Bank Unions are protesting against FDI in the banking sector, privatisation of public sector banks, consolidation and merger of banks.

Shared by
Sagar Media Inc
enkaysagar.wordpress.com – I wanted to take a moment to tell you why I’m so proud that Hillary has chosen Senator Tim Kaine to join her on the Democratic ticket this fall. Nothing can really prepare you for this job. You com… 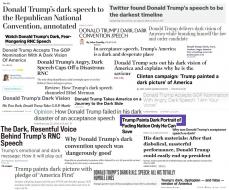 dangerandplay.com – “There’s what you know and there’s what you can prove,” is a line lawyers and fans of the Wire are familiar with. We’ve all known the media conspired with Democrats to rig news coverage. With the W…

Shared by
GreαtBαrçα1899
fcbarcelona.com – FC Barcelona concluded their first week of training of the new season on Saturday, with Luis Enrique giving the squad Sunday off to recharge ahead of Monday’s trip to England for the St. George’s P…

Using Twitter for business – get it right – Adam Houlahan

adamhoulahan.com – By now we all know how valuable and important it is to include social media in your business marketing strategy and one aspect almost all businesses can benefit from is having a Twitter marketing c…

Shared by
WebTrafficThatWorks
adamhoulahan.com – Content writing is the art of storytelling in a powerful way to engage consumers with your brand, and its use extends to social media. There is also a science to social media writing, and doing it …

Your Go-To Social Media Checklist for Your Next Update

Shared by
Derek Fox
blog.bufferapp.com – Before you hit the Publish button or send an update to the queue, what do you do? Quite often, I find myself publishing instinctively and sometimes failing to consider all the necessary questions a…

6 Social Media Templates to Save You Hours of Work

The Art of Social Media

Social Media Approach Every Small Business Should Be Using

Shared by
Marls Russell
All Technology →

This Is How Media Foments Caste Hatred, Divides Hindu Society –

Shared by
DinahLord
All World →

Shared by
Celebrities Hot News
nytimes.com – Asked about the differences between the two productions, Mr. Trump said he could not speak to them with much specificity, because, he said, “I didn’t produce our show — I just showed up for the fin…

Why US media got Trump so wrong, and the right lesson we can learn from it

Shared by
Mathew Thockanattu
blogs.timesofindia.indiatimes.com – Donald Trump has finally won the Republican Party’s formal nomination to run for US president in the elections due later this year. However, less than a year ago top US media houses, known for thei…

Social Advocacy and Politics: Social Media is the Primary Point of Contact with Voters

Shared by
Penny Freeman
socialmediaexaminer.com – Want better engagement for your social media campaigns? Wondering how visual content can help? Using visual content to support your messaging makes it easier to grab your audience’s attention. In t…

Shared by
Social Media Results
myfrugalbusiness.com – Why Your Business Needs Social Media Marketing: Part 1 Your company finally has its website, Facebook, and even a Twitter account set up. You are getting some traffic, you have a small following, a…

Shared by
Take Off PR
All Business →

How to Curb Your Social Media Addiction

Shared by
Grow My Digital Biz
All #socialmedia →

Ready to pass the baton.

Hillary Philadelphia convention Speech : Hillary Clinton publicly accepts the nomination of party nominees to be Presidential candidate.
Positivism  prevailed in the democrats convention.Millions of voters watched his speech with Color of humility,continuous chants of Hillary, Hillary.
Moving speech by an official president candidate of US. Chelsea Clinton spoke with emotions of mother energies of compassion ,care, co-operation, collective-ness,of Clinton community. Clinton clarion call to join to all section of society.
Clinton further asked her voters to believe in her steady leadership ,she care honor allies. Her words of appreciation for Bernie,Tim, Police, Army and crescendo for disabled and lesbian and gay community were cheered.
Further she stressed American values ,Freedom, Liberty, Equality, opportunity employment and justice for all .
She described her counterpart Donald the ignorant with no experience of governance.
Clinton final remarks that she will be President of US for those who vote for her and for also who don’t vote for her.Her emotional speech of her humble background of her parents and the values they taught were the last nail in fixing frame of being the US President in making in ensuing election.
Democrats convention with Clinton effective speech with Barrack strong verbatim created Hillary the most palatable candidature, Barrack  verbatim ,The thing about Hillary is, she already understands all that. She does her homework, she masters the issues, and she never gives up. She gets the job done. And more than almost anyone I’ve worked with in Washington, Hillary’s the kind of person who sees a problem and says, “How can I fix this? What can I do to help?”

Welcome Tim Kaine to the team
at July 29, 2016 No comments: Links to this post