Mr. Fujita has been associated with Yamaha for over 32 years. Prior to this position, he was Executive General Manager, Intelligent Machinery (IM) Operations, YMC. Mr. Fujita has also been an Executive Officer at YMC since 2011.

Speaking on his appointment, Mr. Hiroaki Fujita said, “I am very excited to take up the role of strategic decision-maker at Yamaha Motor India operations. My focus would be on ensuring the development of the best products and achieve synergies through excellent teamwork between Yamaha Motor group companies in India. India is the most exciting and the fastest growing two-wheeler market in the world and hence, a key market for YMC. Also, Yamaha is positioned in the market as the most exciting brand and our sales have been continuously growing in high double digits. With such positive sentiments inside the company and outside in the market, I am looking forward to steer the company to greater heights in the future.”

Recently, YMC has created YMI as the regional headquarters and corporate control body of India business operations. The company is responsible for Corporate Strategy, Business Planning & Business Expansion, Quality Control & Compliance Assurance, and Regional Control of Yamaha India Business. IYM is the manufacturing company while YMIS & YMRI would continue to independently support IYM for sales & marketing and development of its products respectively.
at December 26, 2014 No comments: Links to this post


By Suresh Panje
There is this story about a gate-crasher at a wedding ceremony. Initially, the bride’s father presumed him to be one from the groom’s side while the ‘Baraat’ party accompanying the groom assumed him to be a member of the girl’s family. Thus this uninvited guest feasted on every delicacy sans any interaction or mingling with the other invitees. No wonder, at the end of it all, when he rent the air with a loud belch and was washing his hand after a hearty meal, the bride’s father felt suspicious and tapped him on his shoulder to ascertain as to who he is.

At this the gourmet never lost his cool and quipped, “You see, the jackfruit tree in your forecourt and the one in the backyard at my residence happen to be from the seeds of the same fruit. And that is our relationship!” Saying so, he departed from the scene, leaving everyone flabbergasted. On a cunning note, he seems to have mastered a basic formula of equation from algebra that if a=b, b=c, c=d, d=e and so on, ‘a’ is equal to ‘e’ and even equal to ‘z’.

Similar state of affairs exists today, courtesy the social media like the Facebook in which a simple link with both known and unknown entities could result in a chain action and reaction. In other words, Mr. A from an obscure location in India through this media would get connected to a stranger from some alien land and even become close acquaintance based on topics of mutual interest. The credit for ushering such connection around the globe is attributed to the social media, a downstream application of the information technology (IT), witnessed over the past two decades.

Indeed, the innovative developments in the IT have revolutionised the means of communication across the world, literally defining the oft-heard concept of global village by mere click of the house. Thanks to the satellite and allied cable links, cutting across numerous barriers, the vast network, internet in short, has opened up new vistas for communication for people across the world. The internet has heralded instant interaction through electronic mail, better known as e-mail, specific means of trading named e-commerce and also access to a wide range of information for and all. This technology has progressed so fast over the past two decades that the world has been witnessing some new application in one form or the other as ‘live’ means of communication and one among them happens to be the social media. Social media has become a reckonable parallel entity to the conventional media, be it in the print or electronic version.

The credit for ushering the social media is attributed to GeoCities, the US-based internet services provider (ISP) which later was acquired by another IT giant Yahoo before ceasing operation. However, the concept pioneered by GeoCities has not gone into the oblivion and on the contrary, it has reinforced itself with a stronger impact under different categories and today, prominent among them are the Facebook, Tweeter and flickr. So much so, whatever a person of public stature opines on the Facebook or Tweeter is considered to be as authentic as the statements orated at a conference or a press briefing to such an extent that the reaction from the cross section of the society is overwhelming. Due to space and time constraints, the conventional media of newspapers or televisions may not be projecting the vox-populi whereas the social media give ample scope for all these views.

Further the networking of social media has provided a platform for like-minded persons and fora to create their own mode to relay their opinions on any topic under the sun. This could range from sharing thoughts of mutual interest, issues concerning the neighbourhood as well as at the provincial, national and international levels on assorted themes. Although the social media has not eclipsed the conventional one, its impact has revealed a new ethos in putting across any views or invoking public reaction. Even the heads of the nations around the world have taken a fancy to the Facebook and Tweeter. In India, although the Tweeter had made its presence felt during the regime of the previous Prime Minister Manmohan Singh, its usage has reached newer heights under the present premier Narendra Modi. Reportedly, the tweets by Modi have been well appreciated by his Japanese counterpart Shinzo Abe whom he met during his visit to Japan.  It is also confirmed that Modi is among the just three persons in the world whose tweets Abe tracks!

Besides politicians and other public figures, the social media has played a key role for instant action in the society from a single point of origin. With the user having the option to classify the persons as exclusive friend or a common one with whom the link has been established, any message can be put across the intended message by a mere single click unlike the e-mail where each addressee has to be exclusively denoted as the recipient. Another usage of the social media has been what is known as blogging in which a person is at liberty to project his or her thoughts on any event or issue. It has been an ideal link for known friends who have had no contact for ages and also as the venue or avenue for formation of friendship among persons not formally known to each other.

The Facebook has proved to be a ready think-tank for hundreds of pro-active crusading causes that could range from human rights, education, discrimination on the basis of caste, colour or creed in the society and environmental protection and several social issues. It has also become a handy tool for many to boost their own ego and by relaying certain events which may be of no relevance for the other person. A ready example is that of Facebook users enhancing their illusory social status by letting the world know that he or she is at the terminal of some international airport or watching a movie in an expensive digital theatre in the town. A notable advantage of the Facebook or Twitter is the facility to upload pictures and even videos.

Capitalising on these assets, the social media has become the livewire for a majority of the public figures including the administration to reach out to the classes and masses at lightning speed. There is no need for a person to switch on the television set or wait till the next day for the newspaper to know about the events and other developments including new policies. Great strides made in the arena of computer literacy, particularly, the urban areas is attributed to the social media. The sector of IT industry and trade too has benefited since particular yardsticks have been identified to ascertain the market trends and demands of the end-users.

However, there are negative impacts of the social media too. There have been umpteen instances of certain users, both male and female befriending other persons with ill-conceived proposals from marriage to unethical trade transactions that could result in serious consequences including extraction of money. There have been quite a good number of instances of blackmailing and other provocative acts through this media that could disturb peace in the civil society.

A survey by behavioural science experts had revealed that most of the users of the social media become addicted to the Facebook or Tweeter. This complicated scenario has prompted most of the employers to de-link the social media in the computers at workplace since it was observed the staff had developed a tendency to indulge more in social media at the cost of assigned work. Apart from social media, certain leading corporate houses have even blocked access to e-mail by the employees.
As for other impact of social media on society, only a computer literate person can make his presence felt. With the advancement of technology, the IT applications like e-mail and even the social media could be accessed with the aid of the mobile phones and of course, although a person has to be literate to operate or handle it.
With the social media gaining prominence with each passing day, there is a need for extensive advocacy by the concerned authorities across the globe, on its pros and cons. To a great extent the social media would have redefined what a global village means and also abridged the world that none could dream of even in the middle era of last century. Similar to the proverbial knife being lethal if in the hands of ruffian and on the contrary, beneficial if handled by a surgeon to cure an ailment, the impact of social media depends on the user. The cyber cops and allied agencies designated to monitor the activities on this media need to be more alert and prevent the misuse  of the social media while on the domestic front, elders at home could keep a track on overuse or excessive indulgence by fellow family members.
Suresh Panje

Email ThisBlogThis!Share to TwitterShare to FacebookShare to Pinterest
ANI ‏@ANI_news  1m1 minute ago
Meet was abt security in Assam, will intensify our operations there: Army Chief DS Suhag after meeting Rajnath Singh 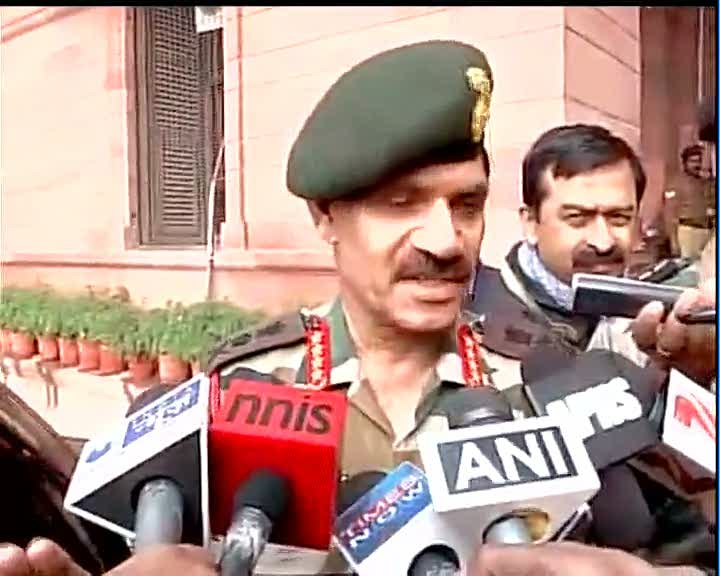 Expand0 replies1 retweet1 favorite
at December 26, 2014 No comments: Links to this post