Bringing nature back to cities is good for plants, animals and humans

eco-business.com - The North Saskatchewan River winds through the center of Edmonton, its waters and the surrounding landscape forming a green spine that spreads a network of ravines out into nearby neighborhoods. Si...

IS attacks Kirkuk as Iraqi forces advance on Mosul 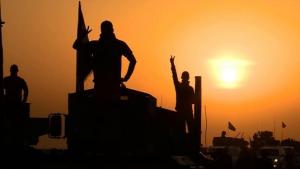 news.sky.com - According to reports around 50 militants - some carrying grenades and wearing explosives vests or belts - were involved in the assault on the strategic city, around 105 miles (170km) southeast of M...

Appreciating UFLEX STAIRS School Football League’s contribution to support the development of Football in India through such massive league across Delhi and Gujarat, ShriGoel personally thanked Siddhartha Upadhyay, Founder and Secretary General of STAIRS for his role in promoting football talent in India. Mr.Goel also added “I used to playKhokho, Basketball, Tennis and was in NCC. I advice all of you to play sports with interest and passion.Football teaches sportsmen spirit and brings the country together. We have to develop ourselves strongly as the FIFA Under-17 is all set to take place next year.”

Shri. Rajiv Yadav, Secretary, Ministry of Youth Affairs and Sports said, “ Our Hon’ble Prime Minister has a vision of football being played in every Indian village. In line with this vision the Mission 11 million program has been planned by the Sports ministry to train 11 million schools students in football from all corners of the country. The Government will work organize Football clinics in schools and support in providing football training and coaching methodologies to strengthen the students on fundamentals of the game.”

“Even the great Swami Vivekananda said that playing football will take you closer to God than praying,” he added while encouraging students to play to the best of their abilities in the UFLEX Stairs School Football League 3. He also thanked and congratulated the UFLEX SSFL 3 team and Siddhartha Upadhyay on holding such an important tournament.

Brand Ambassador of UFLEX Stairs School Football League 3, legendary Cricketer and former captain of Sri Lankan Cricket team, Mr.SanathJayasuriya echoed the sentiments of Shri. Vijay Goeland Mr.Yadavby saying, “First of all I would like to say that Siddhartha and his team are working towards a great cause. Exactly 1 year ago, I was here for the SSFL 2nd edition and I am very happy to be here again for a worthy cause that Siddhartha and his team have been doing. I want to wish them good luck and I want to make sure that they go from strength to strength.”

“For any sport you need to put in lots of hard work, discipline, dedication and you need to sacrifice a lot. This program is going to produce a lot of sportsmen and sportswomen for the country. I wish everyone all the very best”, he added

Thanking the esteemed guests at the inauguration of the UFLEX SSFL 3, Mr. Siddhartha Upadhyay, Founder and Secretary General, STAIRSsaid, “When we talk about a billion plus population, my question is: how many of them play? There is a need to build the sporting culture at the grassroots, expand opportunities for children and help them discover their love and talent for sports. Stairs School Football League is seen as a game changer in the football journey of the country. Already 35,000 children have been enrolled with SSFL, and the aim is to cross 1,00,000 footballers on a permanent basis for scouting, training and development. This year we have added STAIRS football academics in various parts of Delhi and plan to open in Gujarat as well. This will further speed the process of producing champions in the country.”

In its third year now, Uflex SSFL – 3 will see more than 30,000 School level footballers from 2000 schools of Delhi & Gujarat participating in the tournament. The mega sports event will witness 4000 matches (500 in Delhi and 3500 in Gujarat) being played, making it the biggest as well as the longest ever football league at the school level. A total of 256 teams comprising 128 teams of under 14 boys and 128 teams of under 17 boys will be participating in the tournament. Apart from the boys’ team, the tournament will also see avid participation from32 girls’ teams in under 14 and under 17 categories.

The fundamental objectives of Uflex SSFL include –

Uflex SSFL-3 begins with league matches at over 8 different venues across four zones in Delhi while the semi-final and final games will be played at the central venue. The event is solely meant for the children under 14 years and under 17 years of age and exactly follows the FIFA World Cup format. All the participating school teams will also have to go through the qualifier rounds. For the 3rd season SSFL will be getting assistance from Sakaar Association for all its matches/ events in Delhi and from Gujarat State Football Association for all Gujarat-based matches.

The league has become one of the most significant ‘talent spotting’ platforms for clubs and bodies seeking to acquire talent right at early adolescence. While many officials and individuals from professional bodies keep their eyes on the budding players during the matches, selectors from international foreign clubs watch ‘live streaming’ of important matches and even call for recorded videos to assess the performance and potential of promising players.

STAIRS is a New Delhi-headquartered not-for-profit, non-governmental organisation (NGO) which aims to empower the underprivileged youth of India. It is committed to providing opportunities to the young Indians so that they can lead a life of dignity. The NGO, which started in 2000, nurtures the talented sportsmen at the bottom-of-the-pyramid to ensure sports become a mean of earning a living.

STAIRS also organises educational and health programmes and educates youth about the dignity of labour and equality irrespective of caste, creed or sex. STAIRS operates through its 300 centres spread across six states in India..

Bengaluru, October 22, 2016: Reigning Rolex Ranking champion Chikkarangappa S survived a late surge from fellow Bengalurean Rahil Gangjee before prevailing in a close contest at the inaugural TAKE Open Golf Championship at the Karnataka Golf Association (KGA) course. Chikka ended the Rs. 1 crore PGTI event with a persistent final round of one-under-71 that took his tournament tally to 13-under-275.

Rahil Gangjee, tied for the lead till the 16th hole, finished a creditable second at 12-under-276 courtesy his final round of four-under-68.

Home boy Chikkarangappa (69-67-68-71), the overnight leader by three, came up with another unwavering effort at the world-class KGA course to seal his 10th professional title which also accounted for his second win of the current PGTI season.

The 23-year-old Asian Tour regular bagged a handsome cheque of Rs. 15 lakh for his victory and as a result has now zoomed into first position in the Rolex Ranking, taking a leap of 15 places. His season’s earnings stand at Rs. 24,06,640.

Chikka looked set to drive home the advantage when he was two-under for the day through 11 holes. He had holed a 40-footer on the seventh and played a magnificent bunker shot on the 11th for birdies on both holes.

However, it was around this time that Rahil Gangjee (68-70-70-68), who was tied fourth and four off the lead after round three, started making a move.

Gangjee charged into contention as he caught up with Chikka after birdies on the 11th, 14th and 15th holes. The former Asian Tour winner missed an eagle by a whisker on the 11th and made a long conversion on the 14th.

Chikka, who had dropped a bogey on the 14th, survived some anxious moments on the last stretch as he recovered from a tough spot on the 17th salvaging a par with a tremendous chip.

A poor chip by Gangjee, who was playing one group ahead of Chikka, on the 17th, led to a bogey for him and handed the sole lead back to Chikka. Finally, it was a four-foot par conversion on the 18th that saw Chikka come through as the champion.

Chikka, who recently sealed his Asian Tour card, said, “It’s been a satisfying win since I was mentally and physically exhausted coming into the last round, having played four weeks in a row. The last four weeks had taken a toll on me as I was in contention through all these events. My energy levels were low today so I kept telling my caddie to push me to play better.

“I had a bad stretch from the 12th to the 14th where I was not reading the lines well. I then had a nervous last few holes as Rahil made a charge. I got lucky when he bogeyed the 17th. I then decided to play regulation golf. The brilliant chip that set up a par for me on the 17th turned out to be crucial as it kept me ahead.

“This win has brought me back into contention for the Rolex Player of the Year title. I’d love to defend my Rolex Ranking title this year,” added Chikka.

Gangjee, the runner-up, said, “I wasn’t watching the leaderboard but I knew that I had to keep at it till the end since Chikka has been in hot form of late and wouldn’t let go of the lead easily. I enjoyed a superb stretch from the 11th to the 16th. But I missed an important birdie opportunity on the 16th and also got it wrong with my chip shot on the 17th.

“The miss on the 16th turned out to be decisive at the end. Nonetheless, it was a good comeback on the final day,” added Rahil, who recently moved base from Kolkata to Bengaluru.

Indian star Jyoti Randhawa shot the day’s joint best score of 67 to grab a share of third place along with Sri Lankan Anura Rohana (69) and Panchkula’s Shubhankar Sharma (71) at 10-under-278. Shubhankar has now moved into second position in the Rolex Ranking with season’s earnings of Rs. 21,42,513.

Bengaluru’s Jaibir Singh took the prize for the best performance by an amateur as he claimed tied sixth place at eight-under-280 along with Delhi’s Chiragh Kumar.

Sanjay Kumar of Lucknow had a hole-in-one on the eighth during his final round of 72. He finished tied 10th at six-under-282.