Pranab Mukherjee elected to be next president of India

Pranab said after winning president poll, My deep gratitude and appreciation to all.Voting, except one state all others states voted in favor and my total  voting has crossed seven lakhs.
Rahul, Sonia Gandhi meet Pranab Mukherjee at his residence greet him on election as President.
Prime Minister with his wife Gursharan Kaur reach Mukherjee’s residence to greet him on election as 13th President.  Twittered Dr Manmohan Singh ‏@PMOIndia
Prime Minister Dr Manmohan Singh meets Mr Pranab Mukherjee to congratulate him on being elected as the President of India.5:38 PM – 22 Jul 12 via Twitter for iPhone
NDTV ‏@ndtv
PA Sangma congratulates Pranab Mukherjee, says ‘nation has lost opportunity to elevate a tribal to post of President.India’s president house at Raisina Hills, a palatial mansion  of 340-room, palace in New Delhi built for the British Viceroy in colonial rule, is chosen by legislators from the two houses of parliament and state assemblies.
Under the constitution, the prime minister wields plethora of the executive power, kingmakers is role  the president can play a guiding role in the process of forming governments.The next general election, due to be held in 2014, is predicted to be close, leading to a period of complex hung between numerous national and regional parties would be trying to form a stable coalition government. Pranab Mukherjee will be formally sworn in on Wednesday, taking over for a five-year term from Pratibha Patil, India’s first woman president.
Pranab crossed the 558064 in vote value and is set to be India’s next president.Total value of votes in favour of Pranab Mukherjee so far is 5,58,064, while those in favour of PA Sangma is 2,40,783 inspite of  counting of votes remains in Tamil Nadu, West Bengal .At the end of counting in Maharashtra, the 15th of the 30 states, Sangma, supported by some opposition parties including Bharatiya Janata Party got 2,39,966 vote value. Chidambaram visitng Pranab’s home with an invitation for the banquet at the Rashtrapati Bhavan.
Pranab Mukherjee’s daughter Sharmistha tells NDTV that her father would give a new dimension to the office of President of India with his experience and his personal rapport with political leaders that cut across party lines.”I think he has done justice to the offices he has held. He has fulfilled his duties and responsibilities to the best of his ability in whatever he has done. I’m sure he will give a new dimension to the office of the president of India,” she told NDTV.
President poll: Pranab Mukherjee gets support of 527 of the 748 MPs. P.A. Sangma gets support of 296 MPs. 15 votes invalid:
In the 230-member BJP dominated Madhya Pradesh Assembly Mukherjee got 73 votes while Sangma got 156. Four votes were invalid
The halfway mark is down as over 50,000 votes are invalid. . Sangma has notched a truly dismal vote value of 240783 so far.
In Kerala, all votes go to Pranab Mukherjee. Not a single vote for PA Sangma!
Jharkhand: Pranab got 60 votes, Sangma got 20.
Jammu and Kashmir: Pranab got 68 votes, Sangma got 15
Himachal Pradesh: Pranab got 44 votes to Sangma’s 23 votes.
Karnataka, Pranab Mukherjee gets 117 in vote value to PA Sangma’s 103.
90-member Haryana Assembly, Mukherjee got 53 while Sangma received 29 voes. Eight votes were invalid. In terms of vote value, Mukherjee got 5936 and Sangma got 3248.
BJP-ruled 182-member Gujarat Assembly,  Mukherjee got 59 votes and Sangma 123 votes. In terms of vote value, Mukherjee got 8673 while Sangma got 18,081.
Bihar too, where the ruling JD-U has declared support for Mukherjee, the UPA candidate got 146 out of the 240 votes polled in the 243 member Assembly. Sangma got 90, mostly from BJP, which shares power with JD-U.
Mukherjee’s vote value in in the state was 25,258 while for Sangma it was 15,570.
Goa and Chhattisgarh results favor  for PA Sangma where he is leading over Pranab Mukherjee.
In the 90-member Chhattisgarh Assembly, Pranab Mukherjee has got 39 votes, while Sangma won 50. One vote was invalid. In terms of vote value, Pranab got 5,031 while Sangma got 6,450.
In the 40-member Goa Assembly, Mukherjee got 9 votes and Sangma 31. In vote value, this means Mukherjee got 180 while Sangma got 621.
On the sidelines, the Shiromani Akalai Dal prophecy runs thus: The presidential poll exposes the rift in the UPA, Mamata and DMK will return to NDA.
In Assam, of the 125 votes, Pranab gets 110, Sangma gets 13
In Arunachal Pradesh, Pranab gets 54, Sangma gets 2 .
In Bihar, of the 240 votes, Pranab gets 146, Sangma gets 90
In Andhra Pradesh, Pranab gets 182, Sangma gets 3.
In Arunachal Pradesh, Pranab got 54 of the 59 votes polled.
Pranab gets majority in MPs: 527 out of 748 votes:   Pranab Mukherjee gets majority of vote value among MPs in the President’s election. Out of 748 votes counted, 15 are invalid. Sangma gets 206 votes with a value of 145848. Pranab Mukherjee gets 527 votes with a value of 373116.
at July 22, 2012 No comments: Links to this post 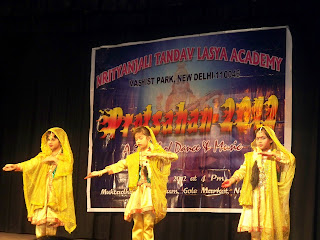 July 21st 2012: Nrityanjali Tandav Lasya Academy organised Protsahan 2012 at Muktadhara Auditorium, an event to encourage young talents in the field of music and dance. This academy got affiliated to Prayag Sangeet Samiti, Allahabad in 2011. The academy was established in the memory of Late Mr. Mahender Singh Bageshwar.

General Secretary, Miss. Meetanjali Bageshwar, who trains the children, has done her Masters in Kathak and senior diploma in music. She also holds CCRT National scholarship. The Chief guest was Dr.Shashi Moitra, a scientist at Central Scientific Instrument Organisation. The children & performed on various songs; from Bollywood item numbers to classical dance.

Article By Shruti Mishra, B.Tech, Associate Journalist Technology,
rimism2003@gmail.com,shruti.asean@gmail.com
Shruti Mishra is an electronics and communications engineer. She got her B. Tech. degree from SRM University, Chennai  and worked  in Tata Consultancy Services as a software engineer for a brief period. At present, she is  working as Associate Journalist Technology. She has filed three India patents and authors. ‘Grooming India’  is her maiden book.
at July 22, 2012 No comments: Links to this post

Indian-American Rahul Nagvekars won the National Geographic Bee Championship with an educated guess about the Bavarian city that was a legislative seat of the Holy Roman Empire from 1663 to 1806. The 14-year-old from Sugarland, Texas, correctly answered the geography stumper by naming the city Regensburg on the Danube River. Approximately four million students from across the US participated in the competition this year.

Indian Americans swept all the top three positions. As champion, Rahul won a $25,000 scholarship and an all-expense paid trip to the Galapagos Islands. At second place, Vansh Jain of Minocqua, Wisconsin won a $15,000 scholarship, and the third place winner, Varun Mahadevan from Fremont, California won a $10,000 scholarship.

Rahul said he fell in love with geography when his parents gave him a globe at the age of three. "I was not necessarily expecting to win. But at the same time I knew that if I was calm and I focused on everything and I listened to all of the questions then I would be able to get a good number right and I knew I could do well if I executed the plan properly," he told ABC News.

President Barack Obama taped a video message congratulating the participants and asked them to answer what city hosted the Nuclear Security Summit he attended this March. Nine out of 10 contestants in the finals answered correctly with Seoul.
at July 22, 2012 No comments: Links to this post