New Delhi, July 14, 2015: The National Rifle Association of India (NRAI), together with the Organizing Committee, unveiled the logo for the 8th Asian Airgun Shooting Championship, scheduled to be held from September 25 till October 1, 2015, at the Karni Singh Shooting Range at Tughlakabad. Shooting fans will get a treat of top quality international shooting after a period of five years, when Indian stars like Abhinav Bindra, Gagan Narang and Jitu Rai lock horns with the likes of reigning Olympic and World Champions Jin Jongoh (Korea), Zhu Qinan (China) and Yang Haoran (China).
There are 12 men and women events in the offing over four days of competition in the senior, youth and junior categories. Airgun competitions are restricted to the Air Rifle and Air Pistol segments.
Expressing his happiness on the occasion, Mr. Raninder Singh, President, NRAI, said, “Shooting has been India’s joint most successful Olympic sport after Hockey. We are confident we will be able to bring greater laurels for the country, come the 2016 Rio Olympics. This (Asian) championship will serve as part of the ongoing preparations towards that goal. I want to thank the Sports Ministry of the Government of India, the Sports Authority of India (SAI), and above all our world class shooters for their relentless support and commitment to the sport, which has been key in helping us bring this high-quality competition to India.”
The senior India shooting squad has already bagged five Rio Olympic quota places, out of a maximum 30 that each nation can win. All five Rio Olympic quota winners, namely 2008 Olympic Gold medalist Abhinav Bindra; London 2012 Bronze medalist Gagan Narang; Pistol aces Jitu Rai and Gurpreet Singh, and Glasgow Commonwealth Games Gold medalist Apurvi Chandela were present on the occasion.
The next assignment for the squad begins on August 6 in Gabala, Azerbaijan where the ISSF World Cup for Rifle/Pistol/Shotgun will see 35 more quota places secured for Rio 2016, hopefully a few more of India as well.
Photo Caption: (L to R) Ace Indian shooters Gagan Narang, Abhinav Bindra, Poorvi Chandel, Jitu Rai and Gurpreet Singh at the unveiling of the 8th Asian Airgun Championship logo in New Delhi on Tuesday.
8TH CMS VATAVARAN NOMINATIONS ANNOUNCED
From: “Indira”
To:
Show full Headers
1 attachment
image002.jpg8.08 KBDownload
Greetings from CMS VATAVARAN!
We are pleased to announce this year’s Award Nominees who are in the running for 23 awards across 8 categories. A total of 75 Indian and International films have been nominated in eight categories out of the total 178 submissions that were received for the 8th competitive edition. Please visit this URL for details-http://vat2015.cmsvatavaran.org/nominations-announced/
75 Thematic Films on Environment and Wildlife to be screened: All the 75 nominated Indian and International films various categories, namely, Water for Life, Wildlife Conservation, Environmental Conservation, Climate Change & Sustainable Technologies, Livelihoods, Films for Children, Newcomer and Public Service Announcements will be screened at the 8th CMS VATAVARAN. The festival is scheduled to be screened across 4 days from October 9 to 12, 2015 at the New Convention Centre, New Delhi.
Films from 16 States and 11 Countries: Of the 75 nominations, 52 were nominated from 16 states across India. The maximum nominations were recorded from Delhi, which led with 19 films. With 8 film nominations, Maharashtra came second. Consistent with past festivals, filmmakers from 26 countries have entered their films in the international section this year with a total of 61 submissions. Out of which, 23 films were nominated from 11 countries. USA leads the chart with 9 film nominations, while Germany comes close with 5 films. This number is significant as the American Centre is the 8th CMS VATAVARAN’s Country Partner wherein various important issues that concerns the two countries will be in focus in the forthcoming festival.

Theme of the 8th Edition: The theme for the 8th competitive edition is ‘Water for Life’ with a special focus on “Conserving our Water Bodies”, which will encompass various sub themes, including water sources, pollution, conservation, cleaning mechanism, health, social and management issues, corporatization, water conflicts and solutions.
To highlight this theme, CMS VATAVARAN has initiated a campaign called “We are Water” that involves students in schools and colleges through online competitions such as poster design and slogan writing and on ground activities such as film screenings, musical acts, quizzes, etc.
Nomination Jury: The Nomination Jury for the 8th CMS VATAVARAN was held from June 24 to 26, 2015 at the ISID, Vasant Kunj in New Delhi. Mr. ‪Rajendra Singh, Stockholm ‪Water Prize 2015 winner and popularly called the Water Man of India, was the‪Nomination Jury Chairperson. Together, 24 Nomination Jury Members (experts from film, environment and media) viewed more than 83 hours of films to select these Nominations.
Now, these Nominated films will be presented to the Award Jury for selecting the award winners during Award Jury Meet to be held from August 26 to 28, 2015.
Number of Awards: The 2015 festival will award a total 23 awards in Indian and International categories to 75 filmmakers. The award money for Indian category ranges from INR 50,000 – 1, 50,000. International awards carry a citation and a trophy. A Best of the Festival Award will be awarded each in Indian and International categories. 5 Thematic Awards will be given out, one each for Wildlife Conservation, Climate Change & Sustainable Technologies, Environment Conservation, Water for Life and Livelihoods. 2 General Awards will be given to the best film under each of the categories: Film for Children and Newcomer. Lastly, there are 2 Technical Excellence Awards, one that will be awarded to the Best Public Service Announcement (PSA) and another for Best Cinematography.
Upcoming 8th CMS VATAVARAN: All nominated films will then be screened in the upcoming film festival and forum. All National and International Film makers of these Nominated films are invited to attend this festival. The 8th edition has been scheduled to be held from October 9 – 12, 2015 at NDMC New Convention Center, Janpath, Opposite Jantar Mantar in New Delhi. The winning filmmakers will be receiving the Awards on October 11, 2015 at a gala award ceremony.
With the theme, ‘Water for Life’, several interesting programmes such as film screenings, seminars, workshops, exhibitions, etc focussing on the environmental, social and economic aspects of water conservation will be organised. Eminent conservationists, policy makers, environment journalists and the conc erned communities will be engaged in deliberations and discourses on the range of the sub-themes and cross-cutting issues of water and conservation.
We would be glad to arrange a special screening. Please contact me if you have any queries.
Regards,
Indira
CMS, RESEARCH HOUSE, Saket Community Centre, New Delhi 110017Ph: 91-11-26522244/55 | Fax: 91-11-26968282 | Mobile: 9899979161
at July 14, 2015 No comments: Links to this post

​Wisconsin governor running for US president

Wisconsin Governor Scott Walker has announced on Monday that he is entering the 2016 presidential race.“I'm in. I'm running for president because Americans deserve a leader who will fight and win for them,” the 47-year-old Republican tweeted. After being elected governor in 2010, he introduced a budget repair plan which limited powers for most public employees.
at July 14, 2015 No comments: Links to this post


A manhunt is ongoing for one of world’s most powerful drug lords, who escaped a top security prison through a 1.5-km tunnel in dramatic style. Freshly-released video and images offer a glimpse into how this brazen jailbreak was executed.

The guards of the notorious Mexican drug lord Joaquin `El Chapo' Guzman realized something was wrong when their VIP inmate tarried in the shower area of his cell on Saturday night.

The empty cell they eventually examined had a hole in the floor. A ladder led down to an underground tunnel, 10 meters deep and 1.5 kilometers long, which ended in a half-constructed empty house in the fields.
at July 14, 2015 No comments: Links to this post

Email ThisBlogThis!Share to TwitterShare to FacebookShare to Pinterest
Nine News Sydney ‏@9NewsSyd  11s11 seconds ago
Nuclear deal struck between Iran and Western powers, after 17 days of negotiations in Vienna. #9News 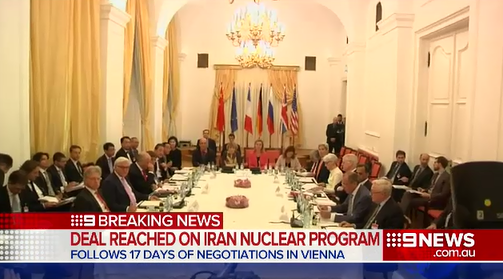