From: Nksagar_1 To: You | See Details
1 attachment

It is our great honour to announce that FICCI would be releasing the ‘’Self-regulation Code’’ for the e-Phramacy sector in the presence of Government dignitaries, and all the concerned stakeholders on 21st November, 2016 at FICCI, New Delhi office. The tentative program agenda is attached herewith for your perusal..

It is apparent that it is the right time as a country to define the regulatory framework to help e-pharmacy have a clear-cut operating model, in line with the concerns of the regulator, while providing benefits to the customers. To better understand this new channel of distribution and to analyze its challenges and the ways to address them, FICCI has decided to organize a launch of Self-regulation Code with industries support to highlight the alignment of the sector towards consumer welfare.

Participation by the officials from Ministry of Health & Family Welfare and Central Drugs Standard Control Organization will be held to have an engaging discussion between the industry and the government.

We request you to kindly block your calendar for the event, FICCI wants to scale up the event size, so your feedback and suggestions are highly appreciated. We invite - suggestions to widen the scope of Program Agenda. Please feel free to write to me @kumar.shivam@ficci.com or call @ - +91-9873341683 for any queries.

Email ThisBlogThis!Share to TwitterShare to FacebookShare to Pinterest
Modi Government is committed to pass the Women’s Reservation Bill says the BJP HRD minister"
TimeFor#33Percent
New Delhi,17 November 2016
The Women’s Reservation Bill (WRB) is still languishing in the Lok Sabha after 20 years of struggle to pass it into law. The Modi government has made a commitment to pass the bill, and after two and half years of governance, it is time for the administration to make good on this promise. With a favorable political composition in parliament and weakened opposition, the conditions are strong for the bill to be passed into law under this government. Women’s rights advocates are renewing their calls for the bill to be passed and are pushing for it to be tabled for consideration during the winter session of Parliament. This week, a delegation lof women's orgnanisations approached Shri Sumitra Mahajan, Speaker of the Lok Sabha and Minister of Human Resource Development Prakash Javadekar and secured their support for moving the bill forward.
In the last two decades, the WRB has been introduced and re-introduced in both houses of the parliament multiple times. While it passed the Rajya Sabha in 2010, the bill faced opposition to passage within the Lok Sabha, particularly from the Samajwadi Party (SP), which believes the WRB would weaken representation for other minorities and underrepresented groups. Today, SP has far fewer votes than in previous governments to impede the bill. Additionally, consensus has grown for measures that would ensure representation of minorities and underrepresented groups under the final form of the bill.
Reservations are a proven strategy to increase women’s engagement in government. 33.3 per cent seats in panchayat elections have been reserved for women already. India’s experience with women's reservation at the panchayat level has been very encouraging on this front. The 73rd Amendment reserves 33 percent of seats in panchayat elections for women with many states increasing the reservation to a full 50 percent at this level. A million women are being elected to the panchayats in the country every five years. This is the largest mobilization of women in public life in the world.
Yet, as the world's largest democracy India still falls woefully behind other countries in its representation of women at the higher levels of political office. Despite a modest increase from 28 women MPs (5.3%) in 1980 to the current day, only 12% of parliament is composed of women MP's. The Inter-Parliamentary Union ranks India 144th out of 186 countries on the measure of women’s representation in parliament. India is outranked by many countries including some with far worse records on other human rights issues, including Iraq, China, Rwanda, Tunisia and even its neighbors Pakistan, Bangladesh, and Afghanistan. When the Prime Minister says he wants 'women-led' development, it is impossible for this to occur without a stronger voice for women at the top: in state and national governance.
In a misogynistic society where women are still subjected to objectification and sexual innuendos in all walks of life, the WRB becomes all the more important to give women a voice in policy that directly affects their lives. Women’s current struggle to gain access to the Shani Shingnapur Temple for the right to pray is only the latest example of the discrimination fifty percent of the population regularly experiences. Twelve percent representation for women out of the total membership of parliament is a sad commentary on the equality of representation in parliament and insufficient to effect change at the national level. India is trying to fill in the huge gender gap, and passing of the Women's Reservation Bill is an important step toward achieving a more gender balanced society.
This week, the Minister of HRD Prakash Javadekar conveyed unanimous support to the women's delegation lead by Dr Ranjana Kumari and including: Women Power Connect, the Centre for Social Research, Oxfam India, Swastik Mahila Samiti, the Joint Women's Porgramme, Justice Seekers, all India Women's Conference, Forum for Women Leaders, Rashtriya Dalit Mahila Andolan, CBCI, Ja Ki Baat and the Pink and Blue Foundation. The delegation urged the government to table the bill in the winter session of the parliament as further delay over passing of the bill will be a matter of serious concern not only to women, but also to all those who genuinely seek women to be empowered. In another round of discussions, Shri Sumitra Mahajan, Speaker of the Lok Sabha, showed complete support for the bill and solidarity with its supporters.
It is time for the government to come together in a clear majority to ensure that the bill is passed and women are better represented in national and state government.
YES.YES.YES #YesToWomen
Various organisations have been demanding the passage of Women Reservation Bill. One of the most prominent name in this battle has been of Dr RANJANA KUMARI director of Centre For Social Research who has been vociferously seeking the tabling of the bill for the longest time.
at November 19, 2016 No comments:

enkaysagar.wordpress.com - Intangible Heritage Committee meeting in Ethiopia to focus on traditional songs, rituals, celebrations and know-how Paris, 17 November–The Intergovernmental Committee for the Safeguarding of the In...

enkaysagar.wordpress.com - Minister Mateja Vraničar Erman perceived this message as a very serious warning that Slovenia should continue with the envisaged reforms, and as a confirmation that the Government should not yet ab... 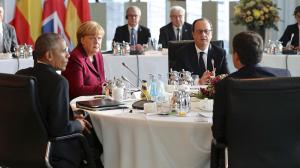 euronews.com - EU leaders have agreed they need to keep working together as part of multilateral bodies like NATO. The leaders of Germany, Britain, France, Italy and Spain met at a mini-summit in Berlin to say go...

OSCE sees over 30,000 individuals in military dress coming from Russia to Donbas - Uaposition

uaposition.com - Ambassador of the United States Daniel B. Baer to the OSCE Permanent Council has said that the OSCE Observer Mission has seen more than 30,000 individuals in military-style dress crossing just at t...
All World →