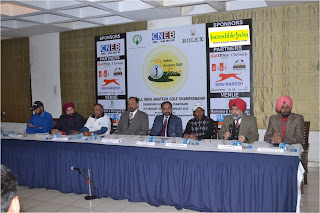 Chikka goes for a unique hat-trick at CNEB All India Amateur Golf Championship.
Chandigarh, January 16: S Chikkarangappa will be a strong favourite to retain his CNEB All India Amateur Championships title when the 111th edition of the Indian Golf Union’s flagship event tees off at the Chandigarh Golf Club on January 17.
Chikka, who is leading the IGU’s Order of Merit, is going for the first hat-trick since 1930, when E L Watts, completed his fourth successive win. Since then no player has won the All India Amateur Championships three times in a row.
The International challenge will include four teams from outside India. The strongest will be from England, to be represented by Jack Colegate and Curtis Griffiths, who are both members of the England A Squad. Other foreign teams include Sri Lanka and Bangladesh, whose players have won the title in the past. Bhutan has also sent a strong contingent.
One of the oldest amateur championships in the world, the All India Amateur Championship started in 1892 and is run by the Indian Golf Union. It has a 36-hole stroke play qualifying competition over the first two days from which the leading 32 players proceed to the match play knockout event.
Manjit Singh, President, the Indian Golf Union, said, “The All India Amateur championship has a rich history and it is one of the foremost amateur events in the world. Over the years, it has produced champions who have gone to become some of the best professionals in the world and even won Majors like Charl Schwartzel at the Masters this year. We are confident that this event will continue to throw up hugely talented golfers in the coming years.”
RDS Tiwana, Managing Director, SLAM G, said, “We are proud to be put in charge of a prestigious assignment like the Amateur Golf Tour and are happy to see that our relentless efforts to raise the bar have been appreciated by the players, IGU and the media. The Amateur golf tour is no longer just another run of the mill affair but has now attained the stature of a very coveted event in amateur sports in the country as well as abroad.”
S. Chikkarangappa, Currently No. 1 on the Indian Amateur Tour Circuit, said, “I am happy to come back to the Chandigarh Golf Club once again and hopeful to win the All India title third time in a row. It is indeed heartening to see the vast improvement in the all round delivery of the amateur circuit in the last one year thanks to SLAM G. I hope SLAM G remains associated with the Tour so that the experience over the last 11 months continuous in the season to come.”
Last year in Bangalore, Chikka, considered one of the brightest prospects in Indian golf, retained the title he won in 2010, beating fellow Bangalorean Pritam Haridas in the final. When Chikka won the title in 2010 at 17, he was the youngest ever winner of the All India Amateurs.
With Indian amateurs showing great promise over the last 18 months, the tournament will bring to the fore the strength of Indian amateur golf. In 2011, Chikka, after winning the All India title in his hometown in February, also won the Inter-State, Southern India and Western India titles, besides losing in the final of Goodricke East India. But Chikka will not have it easy and will be a given a run for his money by the likes of Honey Baisoya, who stunned Chikka in the final of Goodricke East India Matchplay. Baisoya was also second at the Northern India.
Another Bangalore lad, Khalin Joshi has also been in good form, finishing second to Chikka at both Southern and Western India championships. He would be hoping to have his revenge on the biggest stage of Indian amateur golf.
Among the others, who could upset the form book are Angad Cheema, who topped the RCGC Cup, the experienced Manav Das, seasoned Gagan Verma and the dangerous Udayan Mane, winner of the Maharashtra Open and semi-finalist at 2011 All India Amateurs.
Among the dark horses will be Ashbeer Saini, semi-finalist at the Northern India, Sidharth Semwal, runner-up at the Maharashtra Open, and the young Trishul Chinappa, also of Bangalore.
England last sent a team six years ago, and before that in 2004 England’s James Smith reached the semi-finals. The only English winner of the title has been former England captain Malcolm Lewis, who triumphed at Calcutta in 1981.
This year, Jack Colegate, who is leading the English charge, an emerging English talent on the national scene, having finished tied third in the 2010 Faldo Series Grand Final. He was also fifth in the McEvoy Trophy.
The other Englishman Curtis Griffiths, 18, was an England under 16 cap in 2009 and made his debut as a boy international in last year’s European Boys Team Championships and also helped England win the Boys Home Internationals.
The All India Amateur is one of the most prestigious events in the world, with its winners including the likes of 2011 Masters champion, South Africa’s Charl Schwartzel, who was the 2001 winner in All-India. Other leading stars, now top professionals on the world stage include, Frenchman Christian Cevaer (1992), India’s Jyoti Randhawa (1993), South Africa’s Richard Sterne (2000). In more recent times, Asian Tour stars, Siddikur Rehman of Bangladesh won in 2004 and Himmat Rai was champion in 2005.
ABOUT THE ALL INDIA AMATEUR CHAMPIONSHIPS

The All India Amateur Championship was first held at the Royal Calcutta Golf Club in 1892 as a four-round stroke play championship. The first winner was J.F. Macnair. This was also the year in which Lord Lansdowne became the first Patron of the RCGC Club.
Just before the turn of the century, in 1898, the event was changed in format to match play. It is now played as a stroke play for 36 days over first two days and then the top 32 players figure in a knock out Matchplay. The final is a 36-hole affair.
In the early years, the event was generally held in Calcutta and the RCGC and Tollygunge were the hosts. After 1960, Delhi became a regular host and Bombay, as it was then called was added as another staging venue in 1964.
More recently the Indian Golf Union, in an endeavor to popularize the game, has taken the championships to Bangalore, Chandigarh, Coimbatore and Pune also. Chandigarh last held the Championships in 2007.
Posted by Nksagar at 2:30 AM 0 comments

Costa Concordia liner with nearly 4,200 passengers on board, ran aground off the Isola del Giglio island late on Friday initial  reports said at least 16 people were missing.And confirmed death toll in this disaster rose to six on Monday after rescuers discovered three more victims, including the bodies of two elderly men wearing life vests inside the vessel.“I have received a report from the Grosseto prefecture saying that 29 people are listed as missing  25 passengers and four crew members,” port official Marco Brusco said late on Monday.10 Germans and six Italians among the missing and the fate of four French citizens and two Americans was also unknown.
Russians aboard the ship at 108 were found alive in an  cruise shipwreck near the coast of Tuscany,

Indians rescued in Italy cruise mishap-Hunt is on for one missing Indian.
Hundred thirty Indians were rescued on lifeboats after a luxury cruise liner ran aground off the Tuscan coast in Italy. At least five people died and 17 remained unaccounted for. None of them are Indian. Divers are trying to find more survivors. Indian tourists on board ,are safe and back found alive in an Italian cruise shipwreck near the coast of Tuscany and those missing are being traced.Italian prosecutors said they detained Captain Francesco Schettino and First Mate Ciro Ambrosio. They are suspected of manslaughter and abandoning ship in distress.
at January 17, 2012 No comments: