Silver Wave Energy met with US Governor of Maryland 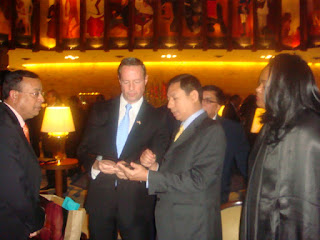 Silver Wave Energy met with US Governor of Maryland
03.12.2011 12:38:59 - Nksagar-Sagar Media Inc: New Delhi: MNC Silver wave energy Chairman Minn Minn Oung visited India in connection with business development. (live-PR.com) - Chairman Minn Minn Oung had a meeting with US Governor of Maryland Mr Martin O'Malley on subject of business opportunities in the field of Oil gas exploration, hotel, tourism and IT in Myanmar.Education and skill development an essential features for the requirements of industries is the need of the hour for Myanmar too figured in the frame of discussion in their meeting. US Governor of Maryland,kindly consented and assured the Chairman Mr Minn Minn Oung to bring the respective industries in his radar with full co-operation in establishing business relations between the two nations. Silver Wave Energy pte Ltd Chairman attended FICCI and met business delegates from Maryland, assured him for their participation in their field of mutual interest.Mr Minn Minn Oung said he is satisfied after meeting Indian and Maryland business delegates at FICCI house at the 'FICCI Partnering Maryland"event.An event with Indian business companies and having highest number of Indian origin American business delegates participation for their mutual co-operation in respective fields echoed of global unity. This business event assumes significance as it coincided with U.S. Secretary of State Madam Hillary Clinton visit to Myanmar in the back drop of restoration of democracy and reforms in Myanmar. Contact information: Sagar Media Inc
at December 03, 2011 No comments: Links to this post

Group C employees not under the ombudsman


Group C employees not under the ombudsman

03.12.2011 04:03:14 - Nksagar-Sagar Media Inc:New Delhi/Ralegan Siddhi: Ombudsman which is sovereign and autonomous authority,the nation in India we are fighting to link it with system and adding its authority from the system and system C employees or judiciary or PM is immune to this Lokpal.What a great wisdom. Anna Hazare on Friday alleged, babbling that Congress is on U-turn on contentious issues of lower bureaucracy and CBI in Lokpal.This is under Rahul Gandhi’s instructions and claimed that the government was delaying resolution of FDI issue to avoid passing Jan Lokpal Bill in the Winter Session of Parliament.


(live-PR.com) - Anna Hazare launched attack on the government accusing of dishonouring an assurance given by Parliament and later by Prime Minister Manmohan Singh that lower bureaucracy, Citizen’s Charter and setting up Lokayuktas through a central law would be included in Lokpal.“I think there is no coordination in this government. Standing Committee took a decision on inclusion of Group C employees in
Lokpal. I think it is Rahul Gandhi who has instructed them not to include Group C and D employees under Lokpal. If you don’t include this, public will teach you a lesson,” he told reporters.

“Maybe Rahul Gandhi told (the Congress members on the panel) on phone not to bring these two or three issues,” he said, adding “this is my guess. You know that when there is smoke there is fire. The fire is not necessarily visible.”

Describing the move as a “betrayal to the entire country,” Hazare said, “On one hand the Prime Minister says corruption is to be curbed but on other, you say Group C and D staff will not be brought under the Lokpal ambit. For incorporating these provisions, you do not need to spend any extra money or have additional personnel,” he said.

“We have been saying from the beginning that Lokpal should be an autonomous institution. Today CBI is under government control. We are saying that there should be autonomy, that the government should not have control (over CBI),” Hazare said.

On Gandhi’s demand for conferring Constitutional status to Lokpal, Hazare said he was not against the idea but warned against government interference.Hazare’s comments came a day after Parliamentary Standing Committee on Lokpal decided against the inclusion of Group C employees under the ombudsman and to have a new set up to select CBI Director as against its earlier decision.When asked why the government was not resolving the FDI imbroglio to ensure smooth functioning of Parliament, Hazare said he suspected that they were doing this as they do not want the Jan Lokpal Bill be passed.