GDP Growth
FM Mukherjee said the immediate task now was to quickly revert to a high GDP growth of 9%, saying that the country had withstood the economic crisis and the Indian economy was now in a better position than it was a year ago. After a fall in GDP growth in 2008-09 to 6.7%, it had built up and 7.2% growth was expected by this fiscal end.Budget address the three challenges facing the economy–to quickly revert to the high GDP growth path of 9%, to consolidate recent gains in making development more inclusive and to remove weaknesses at different levels of governance and to improve public delivery mechanism.Mukherjee expressed the hope that the economy would reach 10% growth in not a too distant a future.

Infrastructure
To maintain thrust of upgrading the infrastructure of the country, he proposed a total investment of Rs.173,552 crore accounting for over 46% of the total Plan allocation. Disbursement by Infrastructure Finance Co. Ltd. or IIFCL is expected to reach Rs.20,000 crore in 2010-11, compared to Rs.9,000 crore this year. IIFCL authorised to refinance infrastructure projects and expected to be more than double in
2010-11.

Rural Sector Development
A provision of Rs 66,100 crore has been made in the budget for rural development, while outlay for social sectors pegged at Rs.1,37,674 crore, accounting for 37% of the total Plan allocation.
Allocation for National Rural Employment Guarantee Scheme stepped up to Rs 40,100 crore in 2010-11, whereas allocation for urban development increased by 75% to Rs.5,400 crore.

Housing
One per cent interest subvention loan for houses costing up to Rs. 20 lakh extended to March 31, 2011, and a sum of Rs.700 crore is provided on this count.To provide one time interim relief to the housing and real estate sector, which was impacted by the global recession, pending projects to be completed within five years instead of four years for claiming a deduction on their profits.

Agriculture
Credit outlay for agriculture raised to Rs.3.75 lakh crore.Farm loan waiver scheme extended up to December 31, 2010 and  the period for repayment of loans under the Debt Waiver and Debt Relief Scheme is being extended by six months to June 30,2010.
Besides, the interest subvention for timely repayment of crop loans is being raised from one per cent to 2%, bringing the effective rate of interest to 5%.The minister said the nutrient based fertilizer subsidy scheme would come into force from April 1.

Fiscal domestic Public Debt
Fiscal domestic public debt Mukherjee said as the recovery had taken roots, there was a need to review public spending, mobilize resources and gear them toward building the productivity of the economy.
The government will follow the recommendations of the Thirteenth Finance Commission by capping the government debt. The Commission has recommended a capping of the combined debt of the Centre and the States at 68% of the GDP to be achieved by 2014-15.The government would target an explicit reduction in its domestic public debt-GDP ratio. A status paper would be brought out within six months, giving a detailed analysis of the situation and a road map for curtailing the overall public debt. This would be followed by an annual report on the subject.

Direct Tax
The Finance Minister has not proposed any hike in the income tax exemption limits, except introducing new tax slabs. He has not proposed any change in corporate tax rate.
Additional deduction of Rs.20,000 allowed on long-term infrastructure bonds, in addition to the existing limit of Rs.1 lakh for specified savings.

Corporate Tax  on domestic companies:
The surcharge on domestic companies is being reduced from 10% to 7.5%. However, the minimum alternate tax (MAT) on book profits is being increased from 15% to 18%
To provide one time interim relief to the housing and real estate sector which was impacted by the global recession, he proposed to allow pending projects to be completed within five years instead of four years for claiming a deduction on their profits.
No capital gains tax on conversion of a business entity into Limited Liability Partnership, says Mukherjee.

Indirect Tax
On the indirect tax front, the Finance Minister has proposed to partially roll back the rate deduction in Central Excise duties and enhance the standard rate on all non-petroleum products from 8% to 10% ad valorem. The specific rates of duty applicable to Portland cement and cement clinker are also being adjusted upwards proportionately.

Cars, Vehicals
The ad valorem component of excise duty on large cars, multi-utility vehicles and sports utility vehicles which was reduced as part of the first stimulus package, is being increased by 2 percentage points to 22%.

Gold
Customs duty on gold has been reduced.

Tobacco
Excise duty on non-smoking tobacco is being enhanced.,in addition a compounded levy scheme is being introduced by chewing tobacco and branded unmanufactured tobacco based on the capacity of pouch making machines.

He said  a number of duty concessions  proposed to support agriculture and allied sector.
Rate of tax on services retained at 10% to give way forward for Goods and Services Tax (GST).The Finance Minister said the tax proposals on direct taxes will have a revenue deficit of Rs.26,000 crore, whereas indirect taxes will have a net revenue gain of Rs.46,500 for the year.

The Lead Bank is expected to assume leadership role and act as a consortium leader for co-ordinating the efforts of the credit institutions and accordingly the various districts in the country were allocated among the public/select private sector banks, as the lead bank for the district. As at the end of March 2009, 26 banks (public and private sector) have been assigned lead responsibility in 622 districts of the country. The scheme presently does not cover the metropolitan cities of Mumbai, Delhi, Kolkata, Chennai and certain Union Territories.
at March 05, 2010 No comments: Links to this post

Where The Rupee Comes From -Goes 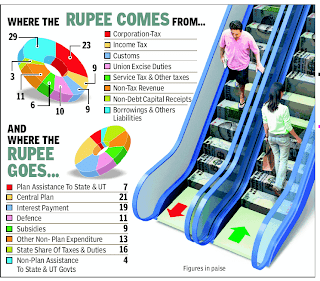 Highlights.
Pranab Mukherjee
"Recovery is still driven by stimulus spending and is not completely broad-based. Keeping the incomplete recovery in mind, the objective is to keep the stimulus until we can see the fruits of economic growth spread across sectors," Mukherjee said at an event of the Confederation of Indian Industry.
Sonia Gandhi:
"We have many essential social obligations and to meet them it is necessary to raise resources. I congratulate the finance minister for a fine and delicate balancing act, which has been widely welcomed," Gandhi told the Congress Parliamentary Party meeting. Gandhi made no mention of fuel prices or the Opposition demand for its rollback in her address.