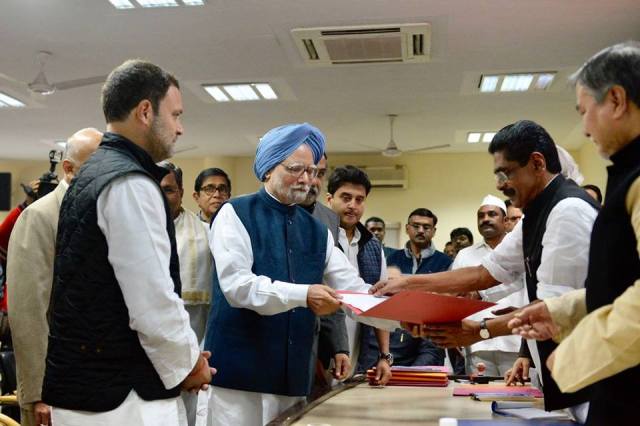 Congress VP Rahul Gandhi prepares his nomination papers for the post of Congress President at AICC.Rahul Gandhi  file his nomination papers for the election to the top Congress post today, the last date for filing of nominations. INC, A new era begins, as Congress VP Rahul Gandhi prepares his nomination papers for the post of Congress President at AICC.
Rahul Gandhi scion is the lone candidate in the fray and decks have been cleared for his election as the Congress president, succeeding his mother Sonia Gandhi, who has held the post for 19 years in a row now.
No one else filed papers till Sunday, according to Mullapally Ramachandran, the chairman of the party’s Central Election Authority.
Congress president Sonia Gandhi and former prime minister Manmohan Singh are among the proposers for the candidature of Rahul Gandhi for the party chief’s post.
Rahul Gandhi accompanied by notable  leaders including Manmohan Singh, Ahmed Patel, Sheila Dikshit, Sushilkumar Shinde, Jyotiraditya Scindia and host of  others.
Senior party leaders Kamal Nath, Sheila Dikshit, Motilal Vora and Tarun Gogoi filed first set of nominations (as proposers) for the Congress vice-president.
Rahul Gandhi, became Congress vice president in January 2013, will succeed his mother, who is the longest-serving chief of the party, having been at the helm from 1998.
The last date for withdrawal of candidature is December 11, and the poll, if necessary, will be held on December 16 and the counting will take place on December 19.
Former Egyptian prime minister Ahmed Shafik, who returned home from the United Arab Emirates after announcing his bid for Egypt’s presidency, appeared in Cairo on Sunday to say he was still considering his run in next year’s election.
Shafik’s comments on a private Cairo television station came a day after his family said he had been taken from their home in the Emirates and deported back to Egypt, where they said they had lost contact with him until late on Sunday.
Shafik, a former air force chief and government minister, has been seen by critics of President Abdel Fattah al-Sisi as the strongest potential challenger to the president, who is expected to run for a second term next year.
Details about what happened to Shafik between his leaving the UAE on Saturday and his declaration on Sunday were unclear. He made a surprise announcement from the UAE last week that he planned to run in the 2018 election.
“Today, I am here in the country, so I think I am free to deliberate further on the issue, to explore and go down and talk to people in the street,” he said on Sunday.
“There’s a chance now to investigate more and see exactly what is needed … to feel out if this is the logical choice.”
The interview on Dream TV was Shafik’s first public appearance since leaving the UAE on Saturday. His family said earlier they feared he had been “kidnapped”. Sources said he had been picked up by Egyptian authorities at Cairo airport.
Shafik dismissed reports he had been kidnapped.
His lawyer, Dina Adly, wrote on her Facebook page that she had been able to see him at a Cairo hotel and said he was not subject to any investigations. She did not confirm whether he was able to leave the hotel or country.
“I had a meeting with Shafik an hour ago at one of the hotels in New Cairo and confirmed his health,” Adly wrote on Facebook, referring to a suburban area of Cairo.
“He confirmed that his health was good and that he was not subjected to any investigations,” she wrote.
Shafik’s family said earlier he had been taken from their home on Saturday by UAE authorities and flown by private plane back to Cairo.
“We know nothing about him since he left home yesterday,” Shafik’s daughter May told Reuters on Sunday before his reappearance.
“If he was deported he should have been able to go home by now, not just disappear. We consider him kidnapped.”
UAE authorities confirmed he left the Emirates but gave no details.
A source at the Egyptian interior ministry said: “We do not know anything about Shafik. We did not arrest him and we did not receive any requests from the prosecution to arrest him or bring him back.”

Media Invitation – Mehar Charitable Society organised Think “AASRA” (an Fund Raising Event) Theatrical Presentation by New Delhi Performers (Hello Cab) Play based on a Real Story – A Muslim woman who stepped out of all disparity and could lead a path of her life, all by herself and become first cab driver of Delhi

cordially invites you to

Play based on a Real Story – A Muslim woman who stepped out of all disparity and could lead a path of her life, all by herself and become first cab driver of Delhi
Directed by: Basab Bhattacharya
Acted by: Ms. Priyanka

Guests of Honour
·         Shri  Shyam Jaju (National Vice President, BJP)
·         Shri  Udit Raj (MP, Lok Sabha)
·         Shri  P. Kamraj (Special Commissioner, Law & Order-South)
·         Smt  Shyama Chona (Educationist & Padam Vibhushan Awardee)
R.S.V.P :
Mrs. Harita Mehta (President, Mehar)| Mrs. Barkha Shukla Singh (Ex MLA & DCW Chairperson)
Dear Media Colleague:
It is my pleasure to inform you that UNESCO New Delhi is planning to organize a national launch and panel discussion on the 2017/8 Global Education Monitoring (GEM) Report at 3 p.m. on Monday, 4 December 2017 at Auditorium Hall, UNESCO House, 1 San Martin Marg, Chanakyapuri, New Delhi, India. The theme of 2017/8 GEMR is “Accountability in Education”.
We are pleased to inform you that there is a strong content in the Report relevant to India; in fact, there are 28 specific mentions of India in the thematic section of the Report as well as several other instances in the monitoring section.
The 2017/8 GEM Report investigates accountability-related issues in education, analyzes how all relevant actors – the international community, government, teachers, schools and parents can provide education more effectively, efficiently and equitably and address global commitments to SDG 4. The thematic section of the Report focuses on the rationale, effectiveness and the intended and unintended consequences of different accountability frameworks in education. In addition to defining accountability in education, the Report also highlights seven approaches to accountability in education: financial, regulatory, professional, performance-based, market-oriented, participatory and national and global accountability. The GEM Reports would continue its assessment of progress towards SDG 4 and its 10 targets as well as other education related targets in the SDG agenda.
I am therefore writing to invite you to the forthcoming launch and panel discussion at 3 p.m. on Monday, 4 December 2017. (At the launch, we would have discussions and interactions focusing on specific sections within the Report (for example, high stakes testing or low fee private schools)).I look forward to welcoming you at UNESCO House at 2:45 pm on Monday, 4 December. 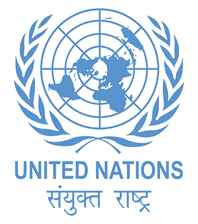 “Transformation towards sustainable and resilient society for all”
3 December 2017

Resilience is central to achieving sustainable development. In its pledge to leave no one behind, the 2030 Agenda embodies a commitment to building the capacities of those who face marginalization and exclusion, in order to reduce their vulnerability to economic, social and environmental shocks.

In recent years, the international community has achieved notable progress in advancing the rights of the world’s one billion persons with disabilities. Disability is recognized as a cross-cutting issue in the 2030 Agenda, the New Urban Agenda and the Sendai Framework on Disaster Risk Reduction.

Yet, persons with disabilities remain too often excluded from the design, planning and implementation of policies and programmes that have an impact on their lives. Too often they face discrimination in labour markets and in access to education and other services.

To overcome this challenge, the path towards inclusive, accessible, usable facilities, technologies, infrastructure, services and products must be ensured by, for and with persons with disabilities. We must build on their agency, working together to design, develop and implement affordable and innovative solutions to realize equality for all.

On the International Day of Persons with Disabilities, let us remove physical and cultural barriers, build resilient societies and create opportunities that truly leave no one behind. 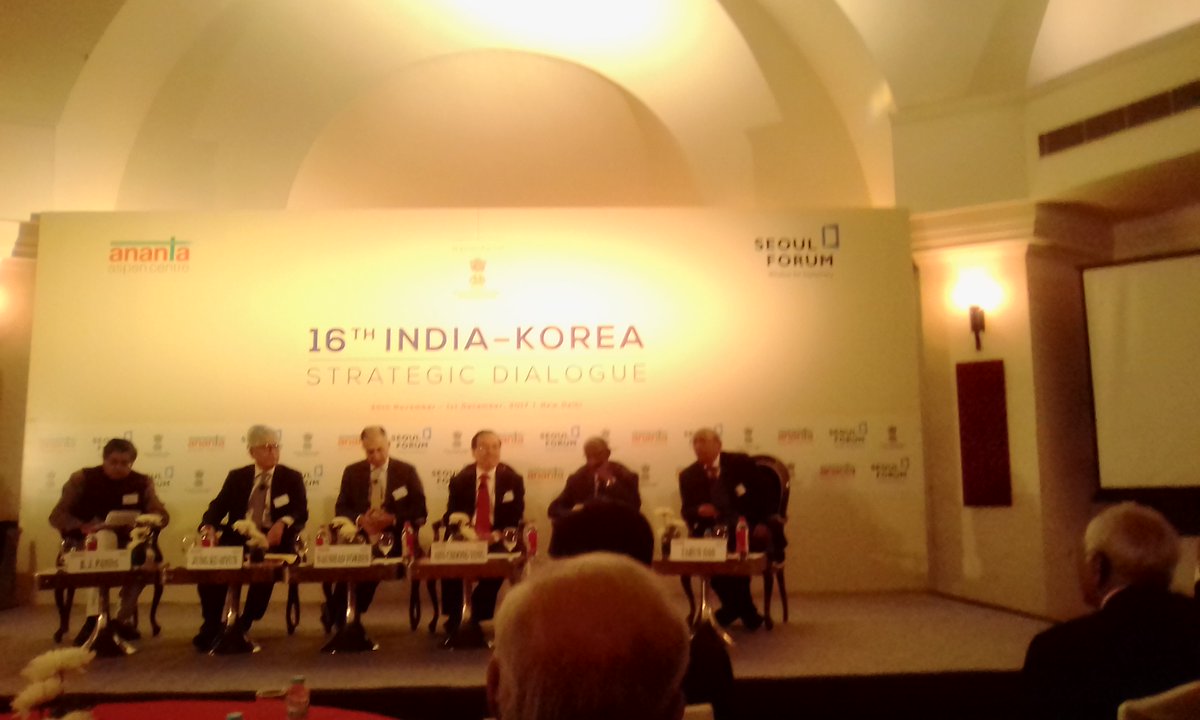