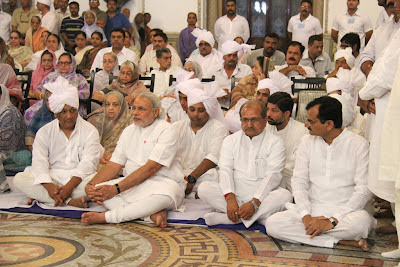 Gujarat Chief Minister Narendra Modi , visited Lakshmi Vilas palace in Vadodara, on Friday, and paid floral tribute to late Shrimant Ranjitsinh Pratapsinh Gaekwad, who belonged to the royal family of Vadodara, died here of kidney problem, in the early hours of Thursday. Shri. Modi placed a wreath on the body of late Ranjitsinhji and paid last respect to him. Paying rich homage to Shrimant Gaekwad, Chief Minister said, he followed the rich tradition of art and culture of Gaekwad dynasty. He led a simple life and was soft spoken but used to give his opinion bravely and honestly. He had such a passion for fine arts that he remained devotee to the subject till his death. “May almighty give strength to the bereaved family to bear this unbearable shock” he expressed. State Tourism Minister Jitendra Sukhadia, Parliamentary Secretary Yogeshbhai Patel, Mayor Jyotiben Pandya, Member of Parliament Bal Krishna Shukla, Bharatsinh Parmar and Ramsinh Rathwa, MLAs Bhupendra Lakhawala & Upendrasinh Gohil, Collector Vinod Rao, members of royal families across the country and people from all walks of life gathered to pay last respect to the deceased monarch of arts and culture.
at May 11, 2012 No comments: