The US military temporarily grounded its entire fleet of F-35 fighter jets - used in Air Force, the Navy and the Marines - as a precautionary measure after a routine inspection detected a crack on an engine blade.
All F-35 flight operations have been suspended until the investigation is complete, the Pentagon said on Friday. "It is too early to know the fleet-wide impact of the recent finding," it said, adding F-35 Joint Program Office is working closely with Pratt & Whitney and Lockheed Martin at all F-35 locations to ensure the integrity of the engine, and to return the fleet safely to flight as soon as possible. The Pentagon said a routine engine inspection revealed a crack on an engine blade of the F-35 engine installed in F-35A aircraft AF-2 operating at Edwards Air Force Base, California. Engineering teams are shipping the engine's turbine module and its associated hardware to Pratt & Whitney's Engine Facility in Middletown, Connecticut, to conduct more thorough evaluation and root cause analysis, it said. The F-35 II is a family of single-seat, single-engine, fifth generation multirole fighters under development to perform ground attack, reconnaissance, and air defense missions with stealth capability.
at February 23, 2013 No comments: Links to this post

Bangladesh, Japan strike deal for Dhaka metro rail With an endeavor to ease the traffic problems that create havoc mainly in the capital city, Bangladesh on Wednesday signed a loan deal with a Japanese development agency for construction of the country's first-ever metro rail system.


Traffic in the country’s capital, home to 15 million people, is among the slowest in the world with commuters spending three-to-four hours in jams daily. A mix of 200,000 motor vehicles and another half-million cycle-rickshaws clog the roads.
Officials said the proposed 20.1-kilometre ground and elevated railway will stretch across Dhaka from north to south with 16 stations and will ferry four million commuters every day, easing the jams substantially.
The project will cost an estimated USD 2.8 billion, Japan International Cooperation Agency (JICA) Bangladesh chief Takao Toda said, adding that his agency will finance 85 per cent of the cost at an interest rate of 0.01 per cent.
"The metro-rail will reduce travel time to 36 minutes (to cross from north to south Dhaka), which now takes hours," Toda said at the signing of the first phase of the loan deal entailing USD 116.3 million for consulting services.
The metro-rail construction will start in 2016 and end in 2021. The government may seek investment from other donors for the remainder of the cost.
The metro will be the impoverished country's second-largest infrastructure project after a USD 3-billion bridge project over the river Padma.
The government says it plans to finance the bridge on its own. Early this month, Bangladesh withdrew its request for World Bank financing for the high-profile bridge project which has been dogged by allegations of corruption involving top government officials.

February 23, 2013
The tiny strategic of Africa nation of Djibouti, the ruling Union for the Presidential Majority (UMP) party said it had won a parliamentary election, as the opposition denounced what it called widespread fraud during voting, on Saturday.
Djibouti, with a population of some 800,000, occupies a strategic position at the entry to the Red Sea and is home to the biggest French and United States military bases in Africa.
During Friday’s election, the ruling Union for the Presidential Majority (UMP) party “received 49.39 per cent of the votes against 47.61 per cent for the opposition” in the capital, home to three-quarters of the population, Interior Minister Hassan Darar Houffaneh told reporters.
The party is also leading ballot counts in the five other voting districts, he said. The UMP is the party of President Ismael Omar Guelleh and held all 65 seats in the last parliament.
“The UMP is conducting massive fraud as usual. This is a joke,” Daher Ahmed Farah, a spokesman for the Union for National Salvation (USN), told reporters.
Friday’s ballot was the first since 2003 in which opposition groups joined forces to form a coalition.
65-year old Guelleh — only the second president since independence from France in 1977 — was re-elected for a third five-year term in April 2011 after the constitution was revised to allow him another term in office.
at February 23, 2013 No comments: Links to this post

by sagarmedia on February 23, 2013
23.02.13 : New Delhi: Hero Hockey World League Round Two – Bangladesh VS Fiji
Bangladesh – Fiji 8-4 (half-time: 3-2)
Mamunur Rahman Chayan’s four goal corner burst eventually put paid to Fiji’s hopes of a first win from a spectacular men’s Hero Hockey World League Round Two 2013 in Delhi.
It helped Bangladesh land their third win from four games and, with a game against India to come, are hopeful of causing  an upset to try and make it through to round three.Things looked to be relatively comfortable when Krishno Kumar Das scored twice in the opening eleven minutes, first with a tidy one-on-one finish, next when he guided home Md Mosiur Rahman Mosiur’s whipped pass.
Kamruzzaman’s excellent rising effort made it 3-0 before Fiji stormed back into contention.  Jerome Edwards scored their first with a very smart piece of work down the right, lifting it in from a narrow angle. And Adrian Smith scored his second of the competition from the same corner that succeeded against China for 3-2 at half-time.
Chayan’s first flick made it 4-2 but, again, Fiji replied this time from Alasace Smith’s thumping penalty corner strike. Chayan, though, formally killed off the game with three more drags in the closing 16 minutes to take away Fiji’s dream while Sheikh Md Nannu spun home in the middle of a late goal-rush. Adrian Smith got his second in the final minute to cap a lively performance but Bangladesh’s win means they will certainly finish above their pre-tournament seeding
at February 23, 2013 No comments: Links to this post 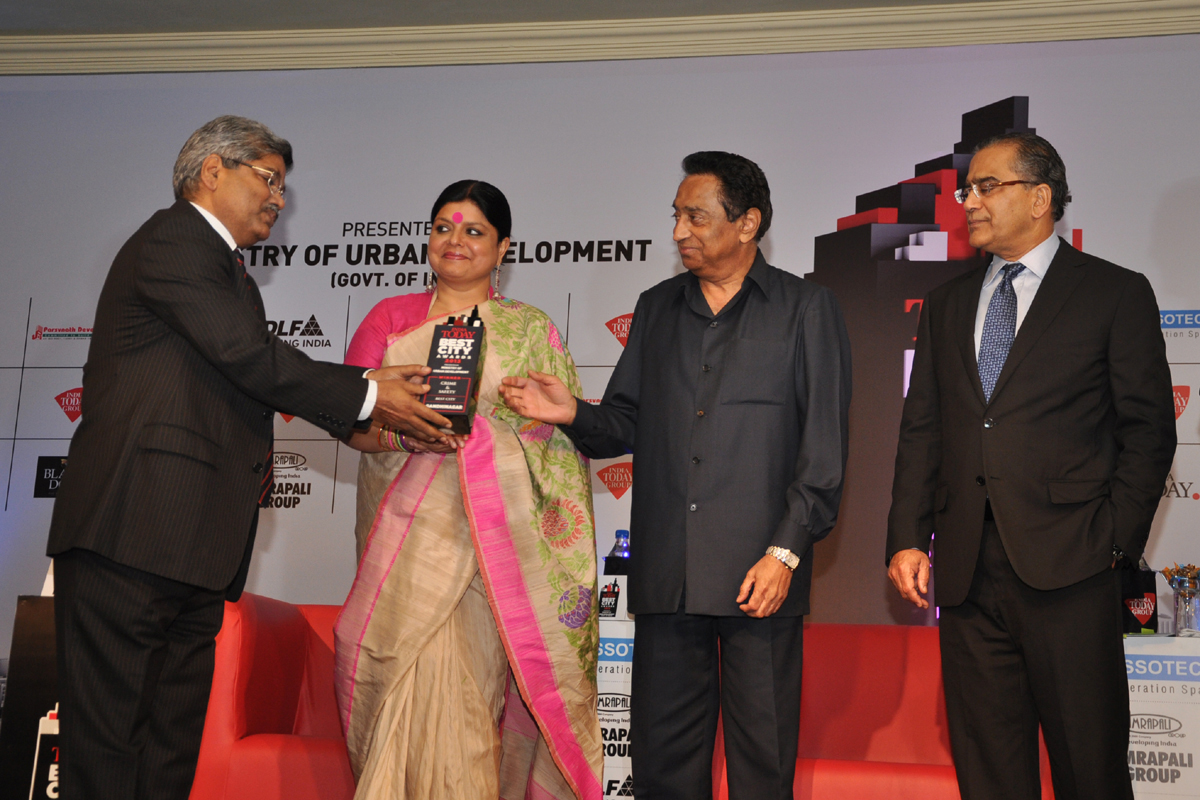 India’s best cities Awards
Gujarat bags five awards, Vadodara ranked overall best emerging city
***
Gandhinagar, Surat and Rajkot also awarded in different categories
New Delhi:  Gujarat has been adjudged with five prestigious “India Today- Best City Awards-2013” in different categories at a function held here. While Vadodara bagged the award for overall best emerging city, Gandhinagar and Surat ranked best cities in category of Crime & Safety, Rajkot for Housing & Transport and Vadodara again for Public Services. All the five awards were received by Shri I.P. Gautam, Principal Secretary (Urban Development) of Gujarat Government from Union Minister for Urban Development Shri Kamal Nath here.
The cities were ranked on a primary survey of 50 cities and out of these, 17 cities were shortlisted with five from Gujarat state.
Gujarat has received a number of national and international awards in last decade for Good Governance. Under the leadership of Shri Narendra Modi as Chief Minister, Gujarat has developed one of the best infrastructures in the country and created conducive environment for its people to realize their full potential and excel in their chosen vocation.
Gujarat has invigorated the development of its cities and urban spaces with innovative ideas and their speedy implementation for long term, robust urban growth. In the last decade, the State Government has taken a series of initiatives dedicated to urban areas that have generated wonderful results.
Gujarat’s pioneering initiatives in areas such as water management,  disaster management, health care, education, women  empowerment, rural development, industrial development, investment promotion have been studied far and wide and several of them have been replicated and up-scaled in other states of the country.
Recently, Gujarat was adjudged the best Big State for providing citizen security and one of the top three Best Big States for their overall performance at the IBN7 Diamond States Awards.
Shri Bharat Lal, Resident Commissioner also attended India Today award distribution function.
at February 23, 2013 No comments: Links to this post