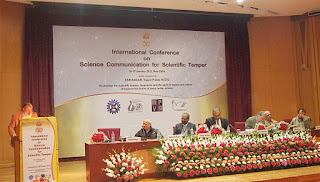 Prof Bernard Schiele from the University of Quebec, Montreal presented the keynote address. Deliberating upon “Science Communication: New World, New Challenges”, he touched upon the science-society dynamic, how science was communicated in the past and what are today’s challenges. He stressed the need for participation and dialogue processes in spreading scientific temper.

Mahesh Bhatt, a renowned film producer from Bollywood, known for commitment to scientific temper, felt happy to be associated with the forum which hopes to re-ignite the fires of the scientific temper in the hearts of every Indian. He said that “Doubt”, which has been looked upon by culture as a sign of weakness, requires more courage than conviction does, and needs more energy. The scientific temper that Jawaharlal Nehru crusaded for, is born from a heartbeat; and that heartbeat is doubt.  A society which is not decorous enough to concede to itself that we are billions of times more ignorant than knowledgeable, is doomed. Even the scientific community needs to wake up and face the blunt truth that their uncritical faith in scientific knowledge has created many of the problems now threatening the planet; and our wholesale reliance on scientific progress is both untenable and myopic.  He said that knowledge and insights accumulate fastest in the minds of those who hold an ‘ignorance based’ world view. Saying no two leaves/snowflakes are the same, we need to recognize this uniqueness of every moment in every individual, to realize the true wonder of life. He suggested to look into the plants life where as the new leaves grow, the older ones wither away and learn how we can work with our ideas, concepts, and beliefs in every sphere of our lives. The plant shows us what it means to be undogmatic.  To put it simply, it shows us how to stay dynamic and adaptable. That is what the scientific temper is all about.

The chief Guest Hon’ble Justice Markandey Katju, Chairman, Press Council of India and former Judge, Supreme Court of India in his inaugural address on the occasion of International Conference on Science communication for scientific temper jointly organized by CSIR-NISCAIR, VP & NCSTC said the purpose of doing science is to harness it for the benefit of mankind to their lives better and happier. He believed that only science can solve a country like India’s problems. Sighting poverty, unemployment, uncontrolled price raise, problems of healthcare, education, housing, children malnourishment, farmers’ suicides, etc he suggested that it should be our motto to abolish these evils and make our country prosperous. He recommended the Four People’s Principles (following the Chinese revolutionary and President, Sun Yat Sen’s Three People’s Principles) Science, Democracy, Livelihood and Unity of the People to be the guiding principles for salvation of India’s problems.

Highlighting the ancient Indians’ scientific achievements, eg. the decimal system in mathematics, plastic surgery in medicine and town planning (Indus Valley civilization), etc., he said that we subsequently took to unscientific path of superstitions and empty rituals, which led to disaster. Today, we are far behind the Western countries in science, and that is the real cause of our poverty and other social evils. Inculcating scientific temperament on a massive scale is the need of the hour. He stressed the need to change the entire mindset of our masses, who are presently engulfed in casteism, communalism and superstitions. He said India, as a country of great diversity in castes, languages, religions, ethnic groups, etc., adopts only secularism that gives equal respect to all communities.

Dr P M Bhargava, former VC, National Knowledge Commission in his presidential remarks briefly explained the study that he conducted with 1000 people for superstitious belief for ex. What would they do if a black cat crosses their path. He said 70% of the people mostly the educated and financially secured, opted to change their path. This is the state of scientific temper in India. Pandit Nehru’s commitment to scientific temper was obvious with the fact that he was the president of the Association of scientific workers of India, an association set up by Dr. Bhargava. Possibly he was the first PM to be a president of a union. He said understanding the basic methods of science is scientific temper. Scientific knowledge is verifiable, repeatable and falsifiable. It keeps on changing and there is no ultimate truth. There has to be a recommendation that the human problems can be solved only by scientific methods and not be invoking supernatural powers. He recollected his involvement with the 1980 scientific temper statement. He said that even during that time many scientists were not willing to sign the statement. Giving the infamous example ‘fish swallowing’ in Hyderabad for asthmatic complaints, he was critical about people including the educated going for such occult treatment. He felt the need for a dedicated Indian TV Science channel to dispel such irrational beliefs.

Sh. Gauhar Raza, the mentor of the whole event, from CSIR-NISCAIR thanked one and all who were part and parcel of the event.

Brief background
Science is as old as the Universe itself. Understanding ‘Science’ can be attributed to the ‘Sixth’ sense. However, communication of science lagged behind even after language developed. Collective progress takes a country selectively ahead. Science, until it reaches masses, is as good as no science. Scientifically aware society shuns ignorance and thereby superstition. Dissemination of scientific information in modes and means understandable by masses is the key. Science communication has been the backbone of man’s progress since beginning. Efficient and speedy communication of scientific information as well as its instant access have been crucial for overall development of mankind. Inculcation of scientific knowledge to the masses, in other words “scientific temper”, has broken many cultural, social and religious dogmas that were otherwise hindering the progress of the human civilization. Acquisition of scientific temper is must for any society to progress and those who failed to acquire lagged behind in time and space.
Scientific temper is an indigenous discourse rich with potential for cross cultural, gender and environmental sensitivity and laden with a continuous struggle against the ill effects of technology on one hand and extra scientific belief systems on the other. It is necessary for people to deal rationally with every mundane issues of the society. In India, the notion of scientific temper was well articulated by the first Prime Minister of India, Pandit Jawaharlal Nehru. Disseminating science is constitutional obligation.
Spearheading the fundamental duty of spreading of scientific temper, Scientists, academicians, artists, filmmakers, dancers and musicians are sharing the stage “Science Communication for Scientific Temper” for three days during 10-12 January 2012, at NASC Complex, Pusa, New Delhi. The occasion is the First International Conference on Science Communication for Scientific Temper being organized jointly by premier Science communication and publishing institutes CSIR- National Institute of Science Communication and Information Resources (NISCAIR), Vigyan Prasar (VP) and National Council for Science and Technology Communication (NCSTC), DST, Government of India.
The first statement on scientific temper by the renowned/legendary Science Communicators Prof P N Haskar, Dr Raja Ramanna and Dr P M Bhargava was revisited in October 2011 at Palampur after three decades in the National Workshop on Scientific Temper—Science and Nation Building: Revisiting Nehruvian Agenda, organized by CSIR-NISCAIR and Vigyan Prasar (VP). This International Conference on Science Communication for Scientific Temper intends to have a conceptually clarity and develop indicators to benchmark the scientific temper. It proposes to bridge the two disciplinary domains—science communication and public understanding of science. It is also aimed at nucleating new groups in India and in countries where science communication and public understanding of science research is in nascent stages. About 200 delegates from 20 countries are attending this International Conference. This gathering will provide an opportunity to share the experiences between the developing and developed world, and to inspire young and trans-disciplinary researchers to bring their fresh perspective and experience from other fields of research with similar concerns.

Brief about Organizers
CSIR-National Institute of Science Communication and Information Resources (NISCAIR), a constituent establishment of CSIR is a premier institute in Science Communication and Publishing promoting science to diverse constituents at all levels, using appropriate technologies. It provides formal linkages of communication among the scientific community in the form of research journals in different areas of S&T, information on plant, animal and mineral wealth of the country; Science popularization; Harness IT applications in information management with particular reference to science communication and modernizing libraries; Act as a facilitator in furthering economic, social, industrial, scientific and commercial development by providing timely access to relevant and accurate information; Develop HR in science communication, library, documentation and information science, and S&T information management systems and services, IPR, herbarium techniques, etc. The institute also offers wide range of information products and services ranging from production of S&T publications, translation & interpretation from foreign languages to English (scientific documents). NISCAIR also undertakes projects in its area of activities.
Vigyan Prasar (VP), established in 1989 as an autonomous organisation under Department of Science and Technology, Government of India, takes up large-scale science popularization tasks/activities, to promote and propagate scientific and rational outlook, to act as a resource-cum-facility centre for S&T communication. VP develops and disseminates and market a variety of software on S & T popularization in different Indian languages (Audio, Video, Radio, TV, Print, Learning packages, Kits, Toys). It organizes training programmes on use and dissemination of software produced.
National Council for Science & Technology Communication (NCSTC) is an Apex Organisation under the Department of Science & Technology, Government of India that endeavours to communicate Science and Technology, stimulate S & T temper, and coordinate and orchestrate such efforts. Main objectives of the council are: to create excitement concerning advances in Science & Technology, to enable informed decision-making at the grass roots level, and to encourage intelligent debate on developmental issues.